Fassbinder’s 1974 drama is a bleak dissection of race, age, gender, bigotry and hate 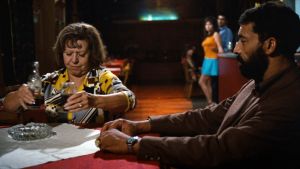 By the time Rainer Werner Fassbinder died from an overdose of sleeping pills and cocaine in 1982, he had completed an astonishing 41 films in just 15 years. That work rate is all the more impressive when one considers that the filmmaker spent most of 1980 making Berlin Alexanderplatz, an epic 15-hour mini-series. And most of his short life making enemies.

A dark-clad, bad-boy, out-and-proud on-again, off-again homosexual who annoyed Marxists, conservatives, feminists, religious authorities and other homosexuals, Fassbinder fashioned films that were alternatively deemed genius, anti-Semitic, anti-German and obscene, with little or no sense of propriety, or, indeed, personal space. (El Hedi ben Salem, star of Fear Eats the Soul, was Fassbinder’s lover for three years. The actor would later hang himself in a Parisian jail – the second of Fassbinder’s ex-lovers to commit suicide.)

The star-crossed lovers are victimised by gossipy neighbours, local shopkeepers, and family. In a violent tribute to the original Sirk film, Fassbinder – playing Emmi’s disapproving son – kicks in her TV screen. Residents in the dingy tenement block where the couple live suddenly start to stress that the place looks filthy. It does not take long for Emmi to start lashing out at Ali and his “foreigner mentality”, nor for Ali to seek comfort elsewhere.

Cinematographer Jürgen Jürges’ tight framing, hideous early 1970s patterns, and old-fashioned grot make for vistas that are as unappealing as the judgemental neighbours.

Prejudices based on nationality, race, age, gender and general otherness, fuse and split to produce unwelcome hybrid intolerances in Fassbinder’s scowling dissection. Yet Fear Eats the Soul, which is neither as breathtakingly rigorous as the same filmmaker’s The Marriage of Maria Braun, nor as admirably Brechtian as The Bitter Tears of Petra von Kant, remains the director’s most tender and accessible drama.

It even manages something like a happy ending without sugar-coating the still poignantly relevant themes.Timely and heartbreaking, some 43 years after its debut.