New this weekend: The Dead Don’t Die, Only You, Stuber, Eating Animals, The Brink 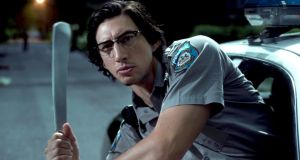 THE DEAD DON’T DIE ★★★★☆
Directed by Jim Jarmusch. Starring Bill Murray, Adam Driver, Tilda Swinton, Chloë Sevigny, Danny Glover, Caleb Landry Jones, Selena Gomez, Rosie Perez, Iggy Pop, Sara Driver, RZA, Carol Kane, Tom Waits, Steve Buscemi
Jarmusch tackles the zombie movie in an amusing comedy about a midwestern town that goes all weird thanks to a shift in the Earth’s poles. There are few variations on the familiar conventions. What Jarmusch does bring is an awareness of contemporary panics and neuroses. He can deny (and he has) that The Dead Don’t Die is an “anti-Trump movie”, but the prevailing sense that something has gone profoundly wrong in the republic is very much of our time. 16 cert, gen release, 105 min DC Full review

Elena (Costa) and Tom (O’Connor) have a meet-cute moment while competing for a late-night taxi in Glasgow on New Year’s Eve. But after some drunken fumbling and clumsy mansplaining of Elvis Costello’s I Want You, they end up in a relationship. There’s a small catch:: she’s actually 35 to his 26, and soon the relationship is a battle against infertility. Writer-director Wootliff’s sensual, heartful, and carefully observed drama is produced by Tristan Goligher (45 Years, Weekend) so it’s not surprising that Only You is powered along by the same romantic realism that defines Andrew Haigh’s work. 15A cert, lim released, 118 min TB Full review

Amusing variation on the mismatched cop genre, with Bautista as a temporarily blinded officer who hires Nanjiani do drive him from incident to incident in dangerous Los Angeles. Bautista and Nanjiani prove to be a perfectly complementary comic partnership. The former’s looming aggression fails to wholly conceal a latent sensitivity. The latter’s gentle introspection is seasoned with streaks of sombre dissatisfaction. The plot is as dumb as a bag of spanners, but Stuber is fun throughout. 15A cert, gen release, 93 min DC Full review

Here are truths about the meat industry that most carnivores already know, but choose to bury beneath stacks of self-denial. Based on a nonfiction book by Jonathan Safran Foer, Eating Animals gets through a lot of information about modern, intensive farming in an impressively tidy running time. The diseased chickens with rubbery limbs and swollen bellies. The shed-loads of pigs whose ordure is washed straight into the mid-western ecosytem. The film argues strongly for a shift in thinking from governments and individuals. Club, lim release, 95 min DC Full review

If you didn’t view Steve Bannon as a world class troll before, this documentary portrait may just change your mind. Red-faced, soda-swilling and frequently looking more than a little green around the gills, the former White House adviser certainly looks like an armchair warrior. His health and dietary habits are, in common with many of his unpalatable habits and beliefs, dismissed in well-rehearsed, self-deprecating one-liners. Director Klayman, who won big at Sundance in 2013 with Ai Weiwei: Never Sorry, allows Bannon to do his everyman shtick, but never succumbs to the Stockholm Syndrome that too often kicks in with personality politics. Club, IFI, Dublin, 90 min TB Full review

Dani (Pugh) is already struggling with a seriously ill bipolar sister and her indifferent boyfriend Christian (Reynor), when a horrifying murder-suicide claims the lives of her entire family. Feeling guilty, Christian reluctantly invites Dani to join him and his friends Josh (Harper) and Mark (Poulter) and Pelle (Blomgren) on a trip to the remote Swedish commune where Pelle was raised. Upon arriving in Halsingland where, in keeping with the title and geography, the sun never sets, the friends are given hallucinogens and asked to take part in a nine-day ritual held once every 90 years. Fans of The Wicker Man or will know that no good can come of this sojourn. Following on from last year’s Hereditary. Aster’s trippy second feature confirms him as the most fascinating genre auteur around. 16 cert gen release, 147 min TB Full review

Other ★★★★★ and ★★★★☆  films out and about: Amazing Grace, Apollo 11, Diego Maradona, Metal Heart, Rocketman, Yesterday. All current synopses here

50 scary films to watch at Halloween
9