James Bond: Is a black female actor really the ‘new 007’? 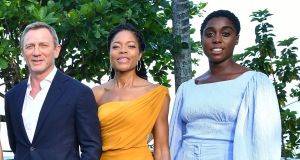 Anybody who doubts the continuing appeal of James Bond need only look to the furore generated by even the flimsiest snippet of gossip. The Daily Mail has just proved the point by announcing the next 007 will be a black woman. One can scarcely imagine news more likely to send the “PC Gone Mad” mob into paroxysms.

The supposed “movie insider” is, however, not suggesting that Lashana Lynch, who played Maria Rambeau in Captain Marvel, is to take on the role of James Bond. The story tells us that “feminist TV writer Phoebe Waller-Bridge” has arranged for Ms Lynch to accept the 007 designation after the current version of the character steps away from MI6. “It’s a popcorn-dropping moment,” the source raved.

“Bond is still Bond but he’s been replaced as 007 by this stunning woman. Bond, of course, is sexually attracted to the new female 007 and tries his usual seduction tricks, but is baffled when they don’t work on a brilliant, young black woman who basically rolls her eyes at him.” (One wonders how “popcorn-dropping” the moment can be now it’s been revealed in the Daily Mail, but we digress.)

There was some more Mail-baiting stuff about the term “Bond girls” being banned and some discussion of Daniel Craig’s recent on-set injury. Within minutes of being published, “Lashana 007” was trending on Twitter.

All this stuff should be approached with the greatest of caution. It was only last October that the same publication ran with: “Film chiefs ‘are set to make Richard Madden the new 007”’. Maybe the star of The Bodyguard is to be the next James Bond, but not actually the next 007. Anything is still possible in the maelstrom that twirls about Bond Island.

If the leak is genuine then it will do the project no great harm. The 25th Bond film had begun to take on the flavour of a doomed production. Danny Boyle was signed up as director with much hoopla and many hurrahs. A few months later, he jumped ship and took his script with him. The appointment of Cary Joji Fukunaga in Boyle’s place calmed nerves, but a subsequent press launch from Jamaica came across as chaotic and ill-planned. Rami Malek was announced as chief villain, but he wasn’t actually there. Almost everyone expected the title to be announced, but Barbara Broccoli and Michael G Wilson, long-time producers, did not oblige. “I can’t reminder the last time when we last had a title when we announced the beginning of the film,” Wilson said grumpily. A few watching Bond fans noted that the end credits used to announce the title of the next film. “James Bond will return in The Spy Who Loved Me” and so on. Then Daniel Craig banjaxed his ankle.

In the current chatter-rich age, almost any story that generates social-media heat for a project is useful to distributors. The Daily Mail’s comments section – famously a bastion of liberal good sense – was awash with punters declaring that they would never again darken the door of a cinema showing this PC Bond. “There’s a docu,emtary [sic] about Barack Obama [sic] life. He will be played by white woman,” some hilarious wag wrote. Few seemed to have read enough of the story to grasp that Lynch was not actually taking over as James Bond.

You are reading this story now. Somebody else is reading a version on Instagram. No suggested boycott will be any more successful than the one proposed against Captain Marvel (current takings: $1.1 billion) for daring to be about a woman. The amusing suggestion that Bond is now at the cutting edge of the gender debate will do the franchise no harm with potential punters whose parents weren’t alive when Dr No premiered in 1962. It’s all fuel for the publicity machine.

Will it matter if the rumour turns out to be untrue? Not much. Eon, the company that runs Bond, can plausibly deny they had anything to do with the supposed leak. The world of espionage is famously murky. Truth blends with half-truth. Half-truths mutate into lies.

All will be revealed when Bond 25 is released next April.

One World: Together at Home – the Irishman who got Lady Gaga to say yes
5