Christopher Nolan’s blockbuster is an innovative film, but not historically authentic

'Dunkirk' directed by Christopher Nolan, features perfomances by Kenneth Branagh and Cillian Murphy. Set in May 1940 it tells the story of the attempt to rescue 400,000 trapped and overpowered British troops from the French Coast. 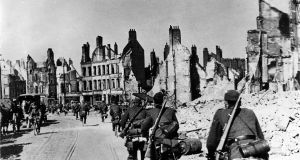 German troops entering Dunkirk in June 1940. In the film, the emphasis is on melodrama rather than authenticity. Photograph: Ullstein Bild/Getty Images

Christopher Nolan’s blockbuster Dunkirk is without doubt the most wonderfully innovative war film I have ever seen. This is not just because it gives a new slant to the familiar image of soldiers on the rescuing ships, in the town and on the beaches: in the film they are to a man struck silent, as if they have witnessed a nightmarish apocalypse.

It is also down to the means used to produce this effect: the film is a cross between the best of the silent movies and a melodramatic Wagnerian opera, complete with thematic music so expressive that a picture of every action is painted aurally before it is seen on screen. It is also full of touches that echo the true dramas I unearthed when writing a book about Dunkirk.

However, if you take on the onerous task of depicting one of Britain’s most famous evacuations, cinemagoers can be forgiven for demanding a limit to poetic licence. When six British soldiers walk down the deserted but pristine Dunkirk street in the first scene, it is immediately clear that melodrama is to hold sway over inconvenient facts.

Just about every window-pane in every street had been smashed by the time the evacuation was under way at the end of May 1940, and the streets were full of bombed and burned-out houses.

The historical scene-setting is no more accurate. Whereas vice-admiral Bertram Ramsay ran Operation Dynamo from Dover, Christopher Nolan has his vice-admiral pop up on the Dunkirk “mole”, the main jetty, to deliver his message to Kenneth Branagh’s piermaster in person.

The dialogue between the two men is equally inauthentic. Ramsay’s pessimistic forecast about the number of troops he could rescue was made at the beginning of the evacuation. Churchill’s decision to let one Frenchman be evacuated for every British soldier rescued was taken towards the end. Yet, in the film, these topics are rolled into one conversation.

Where are the British troops who were responsible for clinging on to their part of the Dunkirk perimeter?

There are many other anomalies. In the film, as well as taking centre stage on hospital ships, women appear at Dunkirk on some of the little ships, although I never encountered any in the course of my research.

The RAF patrols in a group of three planes, notwithstanding the real-life decision to deploy in much larger, multi-squadron, formations. And one of the heroes of the film appears to be reading out Churchill’s “We shall fight on the beaches” speech the day before it was delivered.

The British ships in the movie appear to be expected at the mole during daylight hours, although orders given at the beginning of June 1940 had made it clear that they would only come in at night. They go back to England half empty, having docked at a mole that appears to be much shorter than the one to two kilometres mentioned in accounts I inspected.

None of the megaphones used by the piermasters in real life are on show. Nor are any Frenchmen allowed on to the mole in spite of Churchill’s edict that they should be.

Kenneth Branagh’s piermaster seems to be on duty 24/7 and remains at Dunkirk after the evacuation to help the French, whereas the real-life piermaster, commander Campbell Clouston, returned to England for a brief rest and was drowned on the way back to Dunkirk after his speedboat was bombed and sunk.

What is omitted is even more disturbing. Where are the British troops who were responsible for clinging on to their part of the Dunkirk perimeter? And there is not so much as a hint of the heroic rearguard actions that had to be fought by British soldiers so that the troops could get back to Dunkirk in the first place.

Some of these omissions can be partially explained by the fact that Nolan has opted for a specific focus in this film. However, there is very little contextualisation: why the evacuation had to happen, for example, is never properly explained.

Equally remiss is the failure to profile the bitter rows between French and British commanders over whether the British should carry on holding the port until more French troops could be evacuated. Nor is there even the smallest reference to the number of troops left behind at Dunkirk when the evacuation was terminated: on the British side, a hospital full of British wounded staffed by a skeleton staff of doctors and medical orderlies, and on the French side no less than 80,000 soldiers.

On the other hand, Christopher Nolan does include some very evocative scenes: the most telling in my eyes was the one portraying soldiers who had just returned to England, looking out of their train window at the young boys carrying on with their lives as if the war had never started. This echoed a real-life witness statement I read, made by a young British lieutenant. He contrasted the almost insuperable odds he had just overcome to make it back home with the sight, seen out of his train window, of cricketers dressed in white on their village greens and girls in summer blouses playing tennis “as if there was no war”.

The updated paperback and a new audiobook of Hugh Sebag-Montefiore’s Dunkirk: Fight To The Last Man is published by Penguin. The paperback of his book on the Battle of the Somme will be published in November