There have always been people like Maude Lewis. We're never kind enough to them

Maudie review: Aisling Walsh delivers a sad film about poor people, but it could scarcely be more open to benevolence and quiet humanism 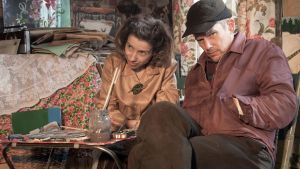 There are, I suppose, people who will remain unmoved by Aisling Walsh’s wonderful study of the Canadian folk artist Maud Lewis. There are also people who wilfully stand on spiders and fail to pat old dogs outside supermarkets. I can’t say I’d like to spend any time alone with such a fellow.

Maudie is a sad film about poor people, but it could scarcely be more open to benevolence and quiet humanism. The title character’s terrible vulnerability – coupled with a singular determination – invites a degree of empathy that can sometimes feel uncomfortable. We are forever wishing that her companions could be a bit nicer to her. We wish the whole world could be a bit less wretched.

After an opening shot of the old Maude (Sally Hawkins) forcing arthritic fingers to paint flowers on a wall, the film slips back to find the younger version, child of a middle-class family, being virtually expelled from her home.

Her brother and her aunt have sold the house, but Maude has no intention of moving from the wind-battered Nova Scotian village. She finds things to do. She enjoys having a smoke at the local roadhouse. We are told that, some years back, she became pregnant and that the child died at birth.

One day, while visiting the local store, she spots an advertisement from Everett Lewis (Ethan Hawke), a local fish seller, looking for somebody to clean his unlovely shack. She tears the paper from the wall and hobbles out to offer her services.

An abusive relationship results. Everett is explicit about the contempt he has for her. “Let me tell you how it is,” he says. “There’s me. There’s them dogs, them chickens. And then there’s you.” There being only one bed in the house, she is forced to spend initially uncomfortable nights wrapped around his rough frame.

The film asks a bit of its audience as the relationship evolves into an unlikely romance. Hawke does allow an inner warmth to Everett, but it is buried beneath such icy brutality that escape seems the only thing worth hoping for. Hawkins’s brilliant performance is unsparing in its sympathy.

She begins at a busy shuffle and ends, body arthritically curled like a clenching fist, as a barely mobile invalid. And yet the compromise these two reach is believable. Their personalities come across as caricatures of generalities concerning gender. She is open and emotionally frank. He is closed and emotionally inhibited. Together they make a whole.

It’s worth clarifying what doesn’t happen. Maudie’s art starts as an automatic distraction. She paints flowers and animals on the walls. Then she moves on to lovely naïve arrangements on postcards. In a typically elegant touch from Sherry White’s disciplined screenplay, Maudie comments upon “a window, the whole of life, already framed”. That simple phrase sums up what she does.

Eventually a posh lady visiting from the city offers to buy one of her paintings and, after a spell, a degree of renown comes her way. But we get no scenes with Maudie adrift among snooty collectors in a New York gallery. There is no great elevation to the pantheon. Shot in beautiful damp shades by Guy Godfree, the film’s greatest gift to Maude is a degree of stability in the ordinary shack that is her whole world.

The isolation is so great that (though we’ve heard mention of “Vice-President Nixon”) it comes as a shock to encounter the nearly modern world in the film’s closing moments. For most of its duration, Maudie could be set at almost any point in the last century. There have always been such people and we’ve never been kind enough to them.