Donnie Darko review: Down the rabbit hole once more 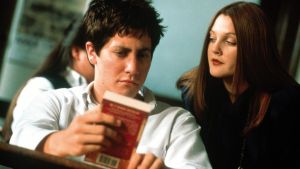 Donnie Darko (Jake Gyllenhaal) is an emotionally troubled teen, prone to sleepwalking and hallucinating a monstrous rabbit. One night, the man-sized lepus – named Frank – calls Donnie to the local golf course, where he informs the high-schooler that the world will end in 28 days, 6 hours, 4 minutes and 12 seconds.

When Donnie returns home the next morning, his house is surrounded by emergency services; while he was gone, a jet engine fell from the sky, landing directly in his bedroom.

To fully comprehend what happens next, you will need to consult The Philosophy of Time Travel by Roberta Sparrow. Unfortunately, the book and its author exist only in Donnie Darko, so diehard fans continue to mull over the film’s many puzzles and ambiguities. What’s with all the rabbits? Who is the fat man in the tracksuit? Why is everyone and everything, including the universe and a young Seth Rogen, picking on Donnie?

Rereleased and 4K-restored to mark the 15th anniversary of its release, Donnie Darko rightly made a star of Gyllenhaal. An impressive ensemble includes coproducer Drew Barrymore and Noah Wyle as sympathetic teachers, Katharine Ross as Donnie’s therapist, Jena Malone as Donnie’s love interest, and Patrick Swayze as a sinister self-help guru.

Swayze wore his own ’80s clothes to blend with the film’s 1988 setting, and the soundtrack makes great use of tracks from Duran Duran, Echo and the Bunnymen, and, most memorably, Tears for Fears.)