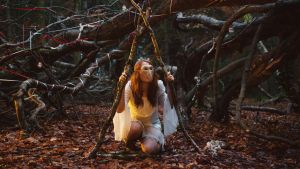 As a subgenre, found footage peaked more than a decade ago, a little way into the Paranormal Activity and Rec sequences, around the time that District 9 was shortlisted for best film at the Oscars. It remains an occasionally fruitful form, wherein name directors and movie stars – see M Night Shyamalan’s The Visit or Jon Chu in Searching – can get back to storytelling basics.

Crone Wood, Mark Sheridan’s nifty, low-budget feature, shot over seven days on a teeny, part-crowdfunded €17,000 budget, is a welcome addition to the canon.

The hiking shop is fun. The banter is playful. But deep in the woods – the dark, atmospheric woods – the pair are disturbed by the appearance of odd figures. They happen upon creepy ruins. There’s some chatter about a witches’ coven.

There are folkish echoes of The Wicker Man, Kill List and The Blair Witch Project in what follows, but Sheridan’s Green Manly mythology finds a unique seam in what might be termed “culchie horror”. From the get-go, Danny’s clueless attempts at heroism are rooted in his urban origins. Clever script incursions into gender politics add to the psych-out.

Fiona Delaney’s costumes and Richard O’Leary’s set designs get the grand framing they deserve around the Hellfire Club, where the film was partially shot. Murphy and Trill make for terrific company. The film-maker’s hide-and-seek horror timing is impeccable.

Too many first time writer-directors opportunistically plump for horror without loving or knowing the genre. Sheridan, who has worked a minor miracle here, is not one of them. We can’t wait to see what he does with a bigger budget.

Crone Wood is available on digital platforms from today