Capture the flag review: take a trip to the dull side of the moon 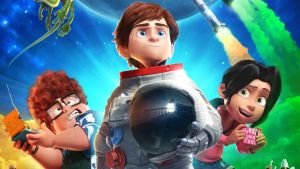 Plucky pre-teen Mike Goldwing doesn’t know why his father and paternal grandfather – both Nasa astronauts – never speak but, he remains determined that at least one Goldwing will make it to the moon. The moon, you say? Well, quite.

You see there’s this bombastic billionaire named Richard Carson – a yeehawing mash-up of Matthew McConaughey and Donald Trump – who has commissioned his own lunar mission.

His stated aim is to prove that the US never planted a flag on the moon; his real purpose is to steal the flag, cosy up to conspiracy nuts and harvest all of the satellite’s Helium 3, a glowing green compound that could solve the earth’s energy crisis.

Before you can say ‘Why are kids allowed to run amok on a Nasa base?; Mike, his two best pals and pet lizard Igor have stowed away on Nasa’s rival mission to the moon. But can they capture the flag before the nefarious Carson does?

Capture the Flag is a Spanish language 3D animation that works awfully hard at looking and sounding like a Hollywood studio picture. To be fair, the BAFTA-winning animator Enrique Gato has created a lively spectacle from a comparatively tiny budget. There are some good jokes: the ‘fake’ moon landing is directed by a Kubrick lookalike and Carson’s terrified chief boffin Giggs is clearly modelled on Steve Jobs.

Commendably, Gato attempts to recreate the lost romance of space travel for a younger generation who, according to Capture the Flag, are either (literally) surfing or (figuratively) surfing the web.

Still, there’s a lot of ‘getting down with the kids’ going on: between threatening butt-whoopings, Mike’s chum Amy is a blogger or something.

Other ill-advised turns include at least one death by explosion and the many, various physical accidents that befall Igor the lizard.

Because what could be funnier than animal abuse, right? Um. Everything?