By the Time It Gets Dark review: The perils of putting history on film 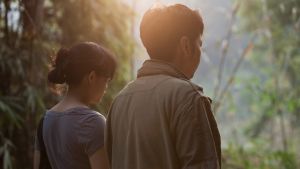 By the Time it Gets Dark

Film Title: By the Time It Gets Dark

Visitors take photographs of a rural house and pray. Soldiers bark at dozens of young men and women hog-tied in a warehouse, which turns out to be movie set. Engaged students discuss political activism.

Anocha Suwichakornpong’s formally-daring second feature begins as a film about making a film about the 1976 Thammasat University Massacre. Young film-maker Ann (Visra Vichit-Vadakan), presumably a surrogate for the director, interviews Taew (Rassami Paoluengton), a middle-aged writer who was involved in these ill-fated student demonstrations. The encounter is excruciating: “I read books about 1976 and I think of you in the midst of it all and you’re still here: You’re living history,” gushes Ann. “I appropriate someone’s life and make it into a film, maybe because my life is mundane,” she continues: tellingly, director Anocha Suwichakornpong’s last film was called Mundane History. The elderly interviewee shrugs off the compliments: “I’m not living history, I’m just a survivor.”

The October 6th event, as it is called in Thailand, claimed anywhere between 46 and more than 100 lives, and was perpetrated by government forces and right-wing paramilitaries. With a nod to the Thai ephemera of Apichatpong Weerasethakul (Uncle Boonmee Who Can Recall His Past Lives, Cemetery of Splendour), the unknowability of historical facts is reflected by the film’s shape-shifting and free associations. One actor, Atchara Suwan, appears as a waitress, a cleaner and a Buddhist monk. Another character, Peter (Arak Amornsupasiri) picks tobacco in the countryside, returns to his sleek modern apartment, enters a cockpit as a pilot (inevitably this is a flight simulation) and makes a pop video, replete with fake rocks on wheels and a catchy, thematically relevant chorus: “Please don’t lie to me.”

Elsewhere, there are mushrooms everywhere: served in food, growing in wood, discovered by the aeronauts in a clip from Georges Méliès’ 1902 film A Trip to the Moon. Finally, after Ann sees, or possibly hallucinates, a boy in tiger pyjamas, she chases him into a forest and discovers a glittering fungus, the kind you would expect unicorns to chow down on.

It may be too elliptical for mainstream tastes, but Suwichakornpong, a Thai-born graduate of the MFA film programme at Columbia University, has fashioned quite the Godardian puzzle. History has seldom seemed more challenging. And history on film is a hiding to nothing.