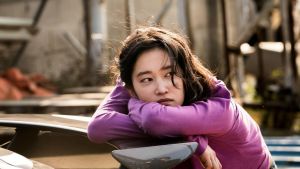 Jeon Jong-seo as Haemi in Burning: “such a zippy enigma she risks manic-pixie-dream-girl status”

By one measure – a grid thing in Screen International – Lee Chang-dong’s long-awaited follow-up to Poetry registers as the most positively reviewed film at the Cannes festival in over 20 years. Then again, it didn’t win a single prize.

Burning really is a remarkable film (if not so remarkable as that opening statistic suggests). It deserves mention alone for expanding a 20-page story into a 148-minute film while ditching most of the sparse incident in the source material. Haruki Murakami’s Barn Burning introduced us to an ambiguous narrator fascinated with another young man who, yes, set fire to farm buildings for kicks. Something similar happens in Burning, but not for a while.

We begin with Lee Jong-su (Yoo Ah-in), who does odd jobs in a northern region of South Korea, encountering a young woman called Haemi (Jeon Jong-seo) working at a lottery outlet. She is as socially confident as he is inhibited. The two have sex in Haemi’s small apartment and she arranges for him to feed her cat when she is away on a trip to Africa.

Behaving very much like cats in the Murakami universe (despite not existing in the story), the beast is never seen when Jong-su calls round to distribute the kibble. The young woman eventually returns with Ben (Steven Yeun), a confident, handsome man who drives a Porsche with aplomb.

Yeun’s status as a star of American television – The Walking Dead to be precise – presses home the social distinctions that charge the romantic triangle. Jong-su is less well-off and less cosmopolitan than his new rival. From the moment Ben arrives the film gains an awkward tension that receives neither release nor moderation until a final cathartic resolution.

The slackness of the narrative may frustrate some viewers. The unwillingness to warm up any of the characters may do the same: Jong-su is the underdog, but he is no more loveable than the swaggering Ben; Haemi is such a zippy enigma she risks manic-pixie-dream-girl status. But the narrative uncertainties and the social uneasiness contribute to a drama that delights in frustrating expectations. Hong Kyung-pyo’s cinematography is sleepily persuasive throughout and gains genuine transcendence during an improvised dance that offers welcome relief from the uncomfortable atmosphere.

The end result is a clatter of anxiety that asks surprising questions in original language.