Annabelle Comes Home: Stop the ghost train, I want to get off

Review: Watching the third Annabelle film feels like being part of a horror-movie focus group 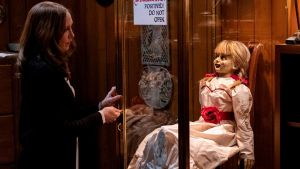 For some reason Annabelle Comes Home has no faith in the titular central doll, even though its director, Gary Dauberman, co-wrote all three Annabelle films

Stop the ghost train, I want to get off. The third Annabelle film – a spin-off franchise from the ever-growing and larger Conjuverse franchise – is a thin gruel.

Annabelle Comes Home seems to know as much. The film, which was co-written by the wildly talented James Wan, attempts to offset its many limitations by briefly drafting in the big guns.

Thus, Vera Farmiga and Patrick Wilson essay Ed and Lorraine Warren – the real life spiritualists who once exorcised the ghost of a chain-smoking loyalist from a Catholic home in Belfast – pop up for all of two short scenes in a guest-star capacity, with bookending appearances that are so TV crossover one half expects Mary Tyler Moore or Lucille Ball to walk in behind them.

Early in Annabelle 3 (as the studio is not calling it), the Warrens leave their haunted artefact room where the eponymous doll lurks menacingly, and take off, thereby entrusting the world’s most sinister and haunted items to their secretly psychic daughter Judy (Mckenna Grace), her teenage babysitter Mary Ellen (Madison Iseman) and a troubled best friend Daniella (Katie Sarife). What could possibly go wrong?

This might have played like a decent sorority thriller had the movie bothered with anything like jeopardy. Instead this bloodless slumber party – that 15A cert is the soft end of that rating – relies on all new and uninteresting monsters. Puzzlingly, Annabelle Comes Home has no faith in the titular central doll, even though director Gary Dauberman co-wrote all three Annabelle films.

Watching the newest entry often feels like being part of a focus group to ascertain the next spin-off monster franchise. What half-arsed anthology story did you like best? The spooky samurai suit? The ghostly wedding dress? The Ferryman? Please tick the relevant box.

Until now, the franchise’s weakest entries have still made merry with genre nuts and bolts. Although the new film works hard to avoid the promiscuous use of jump scare moments, there’s nothing like genuine dread that sustains most of David F Sandberg’s 2017 prequel.

Picture a disappointing tribute to the 13 Ghosts of Scooby Doo. Then add more disappointment. Where is Vincent Van Ghoul when you need him?