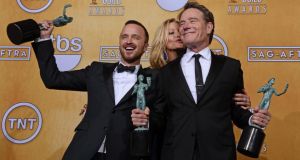 “He is an actors’ director, he is the embodiment of it,” Bradley Cooper, a star of American Hustle, said of Russell, whose film is considered an Oscar favourites.

The casts of Modern Family and Breaking Bad won in the comedy and drama TV categories, as expected.

“I’ve had so many crappy jobs, loading trucks downtown,” said Bryan Cranston, who also won for best actor in a TV drama. “People yelling at you, ‘Cranston, work harder, move faster!’ And the only thing that got me through was imagining” that one day he could be a performer, he said, winning the statuette known as the actor.

The ceremony, held at the Shrine Auditorium and broadcast on TBS and TNT, honoured many stars who are also Oscar nominees.

Cate Blanchett (Blue Jasmine) and Matthew McConaughey (Dallas Buyers Club) won for their lead performances, as they did at the Golden Globes less than a week ago.

McConaughey, receiving glowing recognition after two decades as a star, referred to “this bull ride that we take called acting” and said he was lucky to play characters where he can “humble myself to their humanity and get feverishly drunk on their obsessions.”

Lupita Nyong’o, of 12 Years a Slave, and Jared Leto, of Dallas Buyers Club, won for their supporting performances, reprising victories they’ve scored at other recent award ceremonies, and probably forecasting more trophies in their future.

Rita Moreno earned a lifetime achievement prize. “This, I don’t call it an award, I call it an honour,” she said in the press room later. It’s not about a single performance, “it’s about a lifetime!” Moreno, the rare star who has won an Oscar, a Grammy, a Tony and an Emmy (a feat otherwise known as an EGOT), was told she had one minute of stage time to give her acceptance speech. “I went, wait a minute, I’m Puerto Rican, I can’t even say hello in one minute,” she said afterwards.

Onstage she included a bleep-worthy expletive as she collected her award. But backstage, she expounded on everything from the secret of life (living in the moment - stopping to smell the roses, she said, or the coffee) to her style choices.

Dressed in a studded leather Herve Leger jacket and a floral Roberto Cavalli gown, Moreno, 82, said, “I may be the only person here tonight who actually paid” for her finery. “It’s not going back tomorrow.” And, she added, “I feel I look swell.”

Actor in a movie or mini-series: Michael Douglas, Behind the Candelabra

Actress in a movie or mini-series: Helen Mirren, Phil Spector

The misunderstood, useless and brilliant artists of the Irish diaspora
7