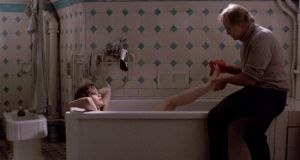 The film industry has reacted with disgust at the admission from a director that one of the most notorious rape scenes in modern film history was shot without prior consent from the actor involved.

Bernardo Bertolucci was facing a backlash on Sunday from actors including Jessica Chastain, Anna Kendrick and Chris Evans after a newly surfaced video clip showed him confessing that he did not consult Maria Schneider about some elements of the infamous rape scene in Last Tango in Paris so as to make her reaction appear more authentic.

In a video interview filmed in 2013 but only recently posted online, Bertolucci confessed he felt guilty about his treatment of Schneider, who died of cancer in 2011.

He describes how he and Marlon Brando conspired to shoot an assault by Brando’s character in the 1972 film using a stick of butter as lubricant to rape his lover played by the late actress – a detail that had not been in the script.

He says he failed to inform her of their plan because he “wanted her reaction as a girl, not as an actress”. At the time of shooting, Brando was 48 years old and Schneider was 19.

As the clip circulated online, Hollywood stars took to Twitter to express their outrage, with Marvel Comics actor Chris Evans tweeting: “Wow. I will never look at this film, Bertolucci or Brando the same way again. This is beyond disgusting. I feel rage. ”

“Ms Schneider stated this several years ago. I used to get eye-rolls when I brought it up to people (aka dudes),” Kendrick tweeted. Evans replied that the men should be in jail.

And the Interstellar actress Jessica Chastain tweeted: “To all the people that love this film- you’re watching a 19yr old get raped by a 48yr old man. The director planned her attack. I feel sick.”

Her sentiments were retweeted by Westworld actress Evan Rachel Wood, who recently penned an open letter about her experiences with sexual assault, with the addition: “This is heartbreaking and outrageous.”

Girls creator Lena Dunham posted a picture on Instagram of Schneider and her former partner Joan Townsend, writing she was “so sorry that art became pain rather than release for you”.

Others complained that Bertolucci was only facing criticism now he had admitted the scene was non-consensual rather than when Schneider initially made the claims herself during an interview nearly 10 years ago.

Schneider told the Daily Mail in 2007 that no sexual intercourse took place on the film set – but said she was kept in the dark about aspects of the scene which had a profound affect on her.

Speaking at the time, she said: “They only told me about it before we had to film the scene and I was so angry. I should have called my agent or had my lawyer come to the set because you can’t force someone to do something that isn’t in the script but at the time, I didn’t know that.”

She added: “During the scene, even though what Marlon was doing wasn’t real, I was crying real tears. I felt humiliated and, to be honest, I felt a little raped, both by Marlon and Bertoucci.”

Last Tango in Paris tells the story of a man who enters into an anonymous affair after his wife takes her own life. It shocked audiences on its release in the early 1970s due to its graphic depictions of sex and rape, and remains controversial today. Long after the film was made many still speculated that the sex scenes were real but Schneider later confirmed this was not the case.

For years after the film, and in part due to the scandal surrounding it, Schneider struggled with drug addiction and depression before her death.

When asked about her in the 2013 interview, Bertolucci said he felt guilty but did not regret his decision on how to shoot the scene.

Speaking at an event at La Cinémathèque Francaise in Paris, he said: “After the movie we really didn’t see each other because she was hating me.

“In the sequence of the butter it was an idea I had with Marlon in the morning before shooting it but I had been in a way horrible to Maria because I didn’t tell her what was going on because I wanted her reaction as a girl, not as an actress.”

He added: “I feel guilty but I do not regret. To make movies sometimes to obtain something we have to be completely free. I didn’t want Maria to act her humiliation, her rage, I wanted Maria to feel, not to act. Then she hated me for all her life.”