47 Metres Down review: From sister act to best chums 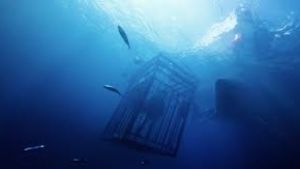 “You’re only going down five metres.” That’s not what it says in the title...

It is possible – and you can check in on the Sharknado films, Super Shark, Two-Headed Shark Attack, and Jaws: The Revenge as proof – to make a dull, or irritatingly mondo film in which an elasmobranch fish terrorises various humans in skimpy swimwear. Yet the shark movie, like its piscine equivalent, never sleeps: it swims on, no matter how big the boat is.

47 Metres Down is a sleeper summer hit in the US, an impressive feat considering the carefully controlled contemporary release schedule, not to mention heavyweight competition (Wonder Woman, Cars 3, All Eyez on Me).

The dialogue and the set-up – often one and the same thing – is rather rudimentary. There are multiple explanations of the bends. There are many ironic reassurances that all will be well: “Don’t worry,” offers Capt Matthew Modine, as he lowers a shark cage into the water; “You’re only going down five metres.”

That’s not what it says in the title, Matthew.

Lisa (Mandy Moore, likeable even playing this mostly whiny character) is the older, boring sister to spirited globetrotter Kate (Claire Holt). During a Mexican holiday, the latter livelier sibling persuades the recently dumped, dull one to venture out into the ocean with two handsome locals, and downwards into the depths in a shark cage.

Before you can say: “What could possibly go wrong?”, the winch holding the cage snaps and plummets to, well, you’ve read the title. There, bloodthirsty sharks circle. Oxygen gauges hit worrying levels. The radio is just out of range.

Plucky Claire responds with ingenuity, although soon enough her scaredy-cat sister will have to woman-up and do her bit if the siblings are going to make it out alive.

This solid actioner might have featured more sharks, or – as with the nailbiting, similarly themed Open Water – featured more spaces where sharks might be.

Still, British director Johannes Roberts (Storage 24, The Other Side of the Door) makes decent use of the murk (the film was largely shot in a tank in London) and the sisterhood theme gives the film a broader appeal than, say, The Shallows, in which a fetishised and bikinied Blake Lively attempted to outwit a CG great white.

A pleasing – if somewhat pilfered denouement – rounds off a perfectly good yarn.

Róisín Murphy: If I want to be famous I can just go to a gay club
10