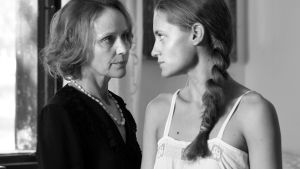 Ági Szirtes and Dóra Sztarenki in 1945

The Jewish father and son, dressed according to Orthodox tradition, are carrying two wooden crates said to be full of perfumes and cosmetics. Might they be returning to claim the pharmacy that István (Péter Rudolf), the village’s crooked magistrate and official, has gifted to his milquetoast son, Arpad (Bence Tasnádi)?

“We have to give it all back,” exclaims the remorseful town drunk, Bandi (József Szarvas). Bandi’s avaricious wife, the local priest, and others, however, remain determined to keep what they took from the deported Jewish population. Meanwhile, Arpad is preparing to wed local peasant girl Kisrózsi (Dóra Sztarenki), even though she clearly still has feelings for her former fiancée, a handsome communist, recently returned from internment.

With his mind on the upcoming election István attempts to keep everyone, including his opium-addicted wife, calm by throwing money around, but today will be a day of reckoning, regardless. It’s High Noon, but with different hats.

Cinematographer Elemér Ragályi’s elegant black and white tableaux, an energetic cast, and the heavy historical subject matter goes some way towards compensating for a frantic, cluttered script that requires so many comings-and-goings, at times it could be mistaken for a particularly busy episode of ‘Allo ‘Allo!.

Too often, the overcrowded story feels contrived: did Kisrózsi have to be torn between the material benefits of collaboration and the newly returned communist? Does every action have to be packed into real time or something like it? Tibor Szemzo’s interesting modernist score amplifies the inappropriately farcical structure.

Against these failings, and following on from his compatriot László Nemes (Son Of Saul), Török’s engaging, imperfect feature has important and timely things to say about historical guilt and remembrance.