120 BPM: Flawed but worthwhile saga of the French Aids years 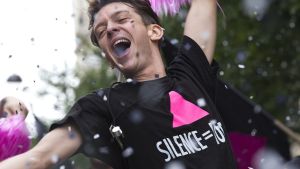 It has taken so long for Robin Campillo’s saga of the French Aids years to make it here – nearly a year since its triumphant Cannes premiere – that BPM almost feels like an established cult film. Its energetic depiction of the Act Up movement’s efforts to shame health officials into action are already part of the cultural conversation. Revisiting the film after all those months, one is struck by the ambition and scope of the piece.

We begin with a meeting of Act Up in a brightly lit classroom. Sophie (the gutsy Adèle Haenel) talks new members through their aims and processes. Not every member is HIV positive, but all must expect to be seen as such by civilians. At such meetings, to allow uninterrupted speaking, finger clicks, rather than applause, are recommended. Information is power. Silence equals death. The film follows Act Up’s campaign against a drugs firm that refuses to release its test results to the Aids community. As the protests play out, the energetic Sean (Nahuel Pérez Biscayart), who has Aids, begins a romance with the more cautious, HIV-negative Nathan (Arnaud Valois).

The picture’s desire to touch on all relevant issues perhaps explains why the analysis is sometimes a little sketchy. Haemophiliacs and transgender people had their own specific concerns. A continuing prudishness kept governments from offering useful advice on sexual health. All these issues are raised, but none is fully interrogated.

The film is at its best when at its most intimate. Carefully framed sex scenes between Nathan and Sean remind us how Aids suddenly intruded on certain intimacies. Those sequences also help point up the contrasts in their personalities. Short of time, Sean is all fire and fury. Nathan moves forwards more tentatively. Both find the relationship cruelly defined by the disease that is killing Nathan.

120 BPM (they really did stick with that bad English-language title, then?) dips into the transcendent – dust in a disco transformed into the aggressive mutations of an Aids virus; the Seine dyed red on International Aids Day intercut with a patient close to death – as it reminds us of a period that informed so much of the current century’s activism. It is a flawed film. But its sweep is irresistible.