Elaine Murphy: Following up a gem of a play on the national stage

Elaine Murphy’s ‘Little Gem’ was a slow-burning success, and now her second play, ‘Shush’, is set to premiere on the Abbey’s main stage 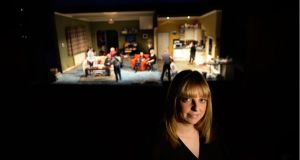 Elaine Murphy on the set of Shush: ‘The audience will change everything. They will teach you more about the play than anything you could ever learn in rehearsals or in a room on your own writing.’ Photograph: Brenda Fitzsimons

Playwright Elaine Murphy is remarkably calm for someone of the cusp of two major life experiences: this week her new play Shush will premiere on the main stage at the Abbey Theatre, while she will give birth to her second child at the beginning of August. At the moment the former event is keeping her mind off the latter.

The event of Shush’s premiere at the Abbey is notable for several reasons. It was commissioned by the Abbey three years ago, but Murphy was aware that “so many commissions don’t ever end up on the stage.” It is also relatively rare for a new play to be produced on the main stage at the National Theatre (the recent production of Drumbelly notwithstanding), and even more unusual for a new play by a woman to get top billing. What makes the occasion even more remarkable, however, is that Shush is only Murphy’s second play. “I did a few shorts, had started a few things but didn’t finish them,”she says with the same unaffected candour that makes her characters so engaging. “And yeah, technically, this only my second play. So when I found out where it was going, I was a bit….whooough,” and she blows her cheeks out for effect.

As a former actress, Murphy has experienced the gendered tradition of Irish theatre first hand; indeed it is the very reason she wrote her debut play Little Gem, three linked monologues that delivered a refreshingly contemporary portrayal of the emotional and sexual lives of women across the generations, as well as three roles for women. “I had been doing bit parts, screen acting mostly, film and TV,” Murphy explains, “and a small bit of theatre, but on the fringes, profit-share things. And it seemed to me that every time I was reading a script or going for an audition that there was one female part and loads of male roles, but there seemed to be far more women than men looking for work. So I suppose I wanted to see if I could write some women parts, maybe with an idea that I’d get a gang together and we’d put it on ourselves.” However, the play was picked up by the independent theatre company Guna Nua, and premiered at the studio space in the Civic Theatre in Tallaght, before moving to the Dublin Fringe Festival, the Edinburgh Fringe Festival, the Peacock Theatre, and eventually the 1200-seater Olympia, as well as Australia and New York. The overwhelming success of Little Gem showed that there was a real appetite for an authentic representation of modern life among Irish theatre audiences, who are predominately female. Murphy had a brilliant time with the production over its three-year continuous tour, but, as she says wryly, “it was an overnight success after 10 years.”

Shush develops Murphy’s conversational style, and her preoccupation with “relationships and how they impact on our lives. I suppose what I am interested in is the things friends talk about among each other. In Shush there are things that the characters might not be able to share with their friends, so they talk to older people, seeking guidance.” If Little Gem was a “slow burn – all these little successes growing more significant,” the premiere of Shush is a bit more intimidating, and not just because of the expectations that come with the Abbey arena. “Part of me would like the security of a smaller run,” Murphy admits, “because with your first play you’re always asking yourself was it a fluke? Can I do it again? But I suppose if it’s going to be out there it’s going to be out there, and, sure, once you’re at that stage your job [AS A WRITER]is done and there is not much you can do anyway.”

Murphy has been in and out of rehearsals since director Jim Culleton first assembled the cast, and despite her own experience in the rehearsal room, she remains astonished by “how much actors bring to a play. Watching them do their thing is a big reminder that the script is just a blueprint; that you don’t have to say everything to be understood.” This is particularly true with Shush, which leaves behind the reveal-all storytelling of the monologue for the more subtle challenges of dialogue. “The thing is, people don’t say what they want to say when they are talking to each other. Or they say one thing, and mean another, and on top of that you are trying to make it sound natural.” Hearing the cast speak their parts for the first time always “helps you to iron out anything that sounds clunky.”

Despite her own acting past, Murphy doesn’t envy the women who will step on stage on opening night. When she wrote Little Gem she may have imagined a place for herself in the cast, but “once we started auditioning and I was sitting on other side of the table, I thought ‘this is way better; watching people come in and do their thing.’ When you first decide to get into this business,” she says, “it’s natural that you would want to act, because acting is the only thing you can see. But then you get involved and you see all the other jobs you can do.”

The day we meet is the day of the play’s first preview, and Murphy is well aware of the fact that “the audience will change everything.” “They will teach you more about the play than anything you could ever learn in rehearsals or in a room on your own writing,” she says, before heading back to the theatre. “They are the ones that will tell you if it’s any good.”

Shush runs at the Abbey Theatre until 20th July.