Does Ireland’s ‘greatest’ philosopher stand the test of time?

Ever wondered whether a falling tree heard by no one makes a sound? George Berkeley has an answer for you 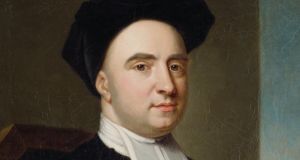 George Berkeley occupies a place in philosophy above perhaps any other Irish thinker. But the former bishop of Cloyne and Trinity College Dublin alumnus, who is being remembered by his alma mater with a three-day conference from today, has less respect from scientists these days.

Berkeley’s most famous contribution to philosophy is “immaterialism”, the doctrine that only minds and mental states exist. The theory was criticised in its day by, among others, Samuel Johnson, who was reputed to have exclaimed “I refute it thus !” while kicking a rock.

Berkeley’s ideas have been parodied too, memorably by the theologian Ronald Knox in a limerick (see panel).

But a more serious challenge has emerged in recent years from neuroscience, and from new discoveries about how the mind and the body interact.

Berkeley expert professor emeritus David Berman agrees these developments in science are “an attack” on the philosopher’s thinking but he believes they are incapable of dealing a fatal blow. He explains Berkeley’s signature idea:
To be is to be perceived .

Berkeley belonged to a great flowering of Irish philosophy. What gave rise to this intellectual renaissance?

Berman: “First of all there was unusual talent at the time, even genius. The main figures here are Berkeley, John Toland, Edmund Burke, William Molyneux, Francis Hutcheson and even Jonathan Swift, who plays a minor role. The other thing was the pressing needs or desires. On the counter-enlightenment side, what you have after the defeat of James II was an emerging Anglican ascendancy that faced the problem of ruling a population composed mostly of Roman Catholics but also Presbyterians. The way the ascendancy did that was partly political, which comes out in the penal laws, but behind that there was a philosophical structure coming from the creative use of counter-enlightenment ideas.”

Was Berkeley simply philosophising to suit his faith?
“I think Berkeley’s primary concern was getting to the truth, but there is no doubt he was also partly influenced by his upbringing and religious commitment. I think the two dovetail. And he does provide a way of dealing with the great challenge that Toland posed in his seminal book Christianity Not Mysterious .

“Specifically, what Berkeley does is to find a way of reinstating mystery by using something he developed or discovered, namely the emotive theory of meaning, a discovery that came partly from his understanding that language has more than one use, that of communication, but also the need to make sense of mystery.”

How does Berkeley counter the materialist notion that matter alone exists?
“Berkeley’s immaterialism can be explained as his insight that what we know of the physical world comes from what we experience from our different senses, and so what we know of the world is built up from objects perceived by minds.

“But since they [objects] are essentially perceived, they do not exist in themselves. Yet that is just what the materialists believe. Hence they are wrong, Berkeley believes; for to assert that a material thing exists in itself is as incoherent as asserting that a pain or smell can exist without being felt or smelled.”

By showing how perceptions emerge from the activity of the brain, has neuroscience proved Berkeley’s dualism to be wrong?
“Nowadays most philosophers do believe that neuroscience has shown how the brain gives rise to perception and so Berkeley is mistaken. But the first thing to recognise is that what neuroscience has in fact shown in greater detail than ever before is the connection between brain states and conscious states; it has not shown how a conscious state has actually emerged from the brain, which is different from showing that X follows Y or if Y [exists] we can expect X.

“Showing the latter is what is regarded as the solution to the soft problem of consciousness, not the hard one which would be showing how the brain, a physical thing, has produced a conscious state, or how consciousness emerged from a world that was purely material.

“So I think Berkeley would say that science or neuroscience has not refuted his philosophy, since it has no experiential or experimental evidence that a physical thing can give rise to a mental thing [consciousness]. What I would like to say is that there is an assumption behind both the monistic materialism accepted by many scientists and Berkeley’s idealism that either mind gives rise to matter, or matter gives rise to mind. The assumption is that one of those two must be true. But why must this be the case?”

Surely Berkeley is on the wrong side of history here, while Toland is more of a philosopher for today?

“The idea that there must be one winner, so to speak, that winner takes all, needs to be called into question, which is why I think that Berkeley and Toland can be both right, that Berkeley’s idealism is true but so is Toland’s monistic or pantheistic materialism; but this needs a good deal of glossing. Yes, Toland’s philosophy is a philosophy for today. But with the way philosophy tends to swing, Berkeley’s could be tomorrow’s philosophy. Yet that too would be a sad result, like the czarist dictatorship being replaced by the communist one under Stalin.

“What I want to say is that Berkeley and Toland can provide beacons for future philosophy, not by being brought together or one rejected in favour of the other, but by being kept apart and seen as equally true, depending on whether one is a Toland or Berkeley-type experiencer.”


Prof Emeritus David Berman will deliver a talk , Irish Philosophy: Past and Future , at the Royal Irish Academy, Dublin at 6.30 pm today , as part of TCD’s Berkeley conference which continues until Sunday.


There was a young man who said “God
Must find it exceedingly odd
To think that this tree
Should continue to be
When there’s no one about in the quad.”


“Dear Sir, your astonishment’s odd.
I am always about in the quad.
And that’s why the tree
Continues to be
Since observed by, Yours faithfully, God.”