Deep changes under way in how we watch TV, and impact goes beyond rental market 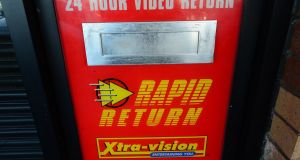 The announcement that Xtra-vision was finally closing will come as no surprise to anyone who has been observing trends in video and entertainment consumption. Photograph: Dara Mac Dónaill/The Irish Times

It is no consolation to the hundreds of people who lost their jobs this week, but the announcement that Xtra-vision was finally closing will come as no surprise to anyone who has been observing trends in video and entertainment consumption.

It was always a question of when, not if, the country’s biggest video rental chain was finally going to pull down the shutters.

The forces at play were the same as those already seen by record shops, booksellers and newspapers, all of which have been hit hard by consumers’ inexorable shift away from purchasing tangible objects in an actual shop and towards getting digital content via a multiplicity of internet-connected devices.

For the moment, though, books and newspapers continue to exist as commercially-viable physical products, albeit with smaller audiences. The much younger business of renting and buying videos, however, has simply collapsed – and the process has occurred even faster than the record industry’s fall.

In the longer term, this shift has significant consequences for the entire film and television industry, and for how we all think about television and video in our own lives.

Just as significantly, there’s a video on demand explosion taking place in the US, with Netflix, Amazon, Hulu, Apple and other tech-based companies battling it out for the attention of “cord cutters” – people who are sick of the old cable system, with its hundreds of unwatchable channels.

The result has been a remarkable flowering of high-quality drama and documentaries. Series such as Netflix’s Making a Murderer are the subject of intense interest around the world, and long-form television drama has been hailed as the primary art form of our age, appealing to a more mature audience turned off by the comic-book releases that dominate cinema multiplexes.

A generation is now arriving at adulthood which has never experienced the old-fashioned concept of watching a particular programme at a particular time.

Meanwhile, under the radar of traditional media, stars of the future are building huge young audiences on their YouTube channels. Hollywood studios are scrambling to catch up; Disney paid half a billion dollars for Maker Studios, one of the big new YouTube networks.

A study by Cisco has predicted that by 2019 online video will account for four-fifths of the world’s Internet traffic. People are using low-cost devices such as Google’s Chromecast to stream online content from their laptop, phone or tablet to their television.

For €140 or so, you can go into a shop and buy an Android “TV box”, a device that hovers ambiguously between legality and illegality with promises of “a world of free content”, including new cinema releases and Premiership football matches.

While broadcasters point out that the majority of television watching is still being done the old-fashioned way, all these factors – the battles between telecommunications companies, the rise of the new US content providers, the disruptive impact of a new generation of YouTube producers who bypass traditional channels, and the seemingly unstoppable availability of copyrighted content by illegal or quasi-legal means – indicate that television and video as we used to know them are changing in front of our eyes.

The question now arises as to whether traditionally structured broadcasters and film distributors will be able to meet that same challenge, of competing in an era where audiences expect all kinds of content immediately, and whenever and wherever they want it.