We talk about the importance of the arts in the national conversation, yet conversation about the policy to shape the arts themselves is barely audible 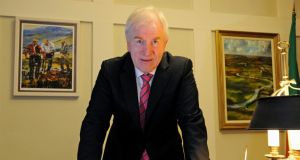 Minister for Arts: Jimmy Deenihan would be more exercised by the turf cutters in Kilteevan than the funded arts sector. Photograph: Dave Meehan

Emblazoned across many of the capital’s buses are the words “The Abbey Theatre, living in the moment for 110 years”. It seems the Abbey is having another “moment”, much of it played out on these pages.

Like those buses, Abbey moments arrive sporadically, this latest on the heels of the fanciful relocations to the GPO and Grand Canal Dock, the departure of its previous director and its debt restructuring. On it goes, all the way to 1907 and the riots that greeted Synge’s Playboy, each new imbroglio the source of hyperventilation among the chattering classes, often accompanied by politicians eager to assert their cultural profundity.

This too will pass. Momentarily, it distracts us from the real issue: the policy gap in Irish arts today. In its infancy, 2014 brings compelling evidence of how deep the rot is. Sadly for the Government, there can be no reset button for a farrago on the scale that unfolded in Limerick last month: €6 million is quite a tariff when viewed against the relentless deterioration in funding and influence of pivotal agencies such as the Arts Council and Culture Ireland, the bitter harvest of which we are now beginning to truly reap.

How did this happen? When I first became active in the arts, in the mid 1990s, there was a construction boom of sorts. What we were building was sectoral capacity: limited companies, with strong boards, reporting structures, expertise and people. The armature of a cultural sector built to last, the outcome of a long consultative process, distilled into ambitious policy documents. Not everyone agreed, not all of it got delivered, but all acknowledged that the process that drove it was robust and comprehensive.

Now we are taking that edifice down, one stealthy budget at a time, and arts policy is the love that dare not speak its name. Our sector lacks direction and leadership, flapping in the headwinds of an existential crisis. There is a cognitive dissonance between the cultural pieties and the reality. At every opportunity we proclaim the arts’ potency as an agent of change. We assert the artist’s right to speak truth to power. Our politicians intone the names of the artistic dead and the societal change they forged.

But two years out from a certain commemoration, it’s hard to identify a constituency as politically captured, as timorous, as the funded arts sector, either those supported through the Arts Council or those further up the food chain, such as the national cultural institutions.

We talk about the importance of the arts in the national conversation, yet conversation about the policy to shape the arts themselves is barely audible. Elsewhere it’s more honest. Be it justice, education, social protection or agriculture, from their first day in office, Ministers holding those portfolios brace themselves to be robustly challenged. It comes at the annual conference, in the Dáil chamber, in the media, on the hustings. It is the cut-and-thrust of policy formation, and parties to the discussion don’t hold back in their critique of the State, even though they might be clients of it. It’s democracy at work.

But in the arts, can we say such candour exists? Privately, senior figures express concern; publicly they feel gagged for fear of reprisal through the opacity of funding decisions. Minister for Arts Jimmy Deenihan would be more exercised by the turf cutters in Kilteevan than the funded arts sector. Grassroots organisations such as the National Campaign for the Arts have sought to advance a research agenda to inform future policy, but political progress is glacial. The dirty bomb that went off in Limerick gets quarantined by the Minister’s department, and the Arts Council is mute on the affair, yet both had representatives on the board, in Niall O’Donnchu, the department’s assistant secretary general, and Orlaith McBride, the director of the Arts Council.

We know further austerity awaits the arts. Money matters, but so does vision. Formulating policy in an area as subjective as the arts is challenging, but we can put it off no longer. Also, the 2003 Arts Act provides the Minister for Arts with the legislative tool kit to do so. Painful choices would be required, particularly by the Arts Council. I might find myself on the receiving end, but I’ll accept the outcome of any process conducted openly, honestly and co-operatively. That would be preferable to watching 20 years of work go down the drain in the slow paralysis of death by 1,000 cuts.

We are better than this. We have extraordinary cultural assets. The best are often intangible, and it’s time to explore brave new paradigms that will allow them to flourish. Our current path leads only to a cultural ghost estate of hollowed-out structures with empty seats run by zombie organisations, the best emerging talent gone to New York and Berlin, the audience at home watching US dramas on Netflix.

Like the painted shop fronts in Fermanagh when the G8 visited, it will be good for ministerial photo ops but not much else.