Culture Shock: In the political game, the arts is for losers

With the arts portfolio reduced to little more than a junior ministry, and one of our finest venues being flogged by Nama, the current cabinet reshuffle shows how little the Government values our cultural assets 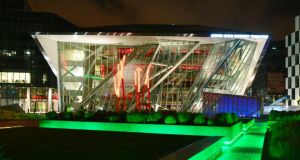 The Bord Gáis Energy Theatre, one of our finest pieces of cultural infrastructure, is being sold off by Nama at a quarter of its original cost. Photograph: Alan Betson

Consider two depreciating assets: Ireland’s most lavish arts venue and the minister for the arts. If you had shares in either of them, you’d be jumping out the window. In each case, events this week told us a great deal about the status of the arts in a society that names its Naval vessels, ferries, bridges and pubs after writers but that still sees imaginative creativity as a marginal activity.

Wind back to the mid-1990s when the arts portfolio was established by the Fianna Fáil/Labour and then Fine Gael/ Labour/ Democratic Left governments as a cabinet-level post. The office was occupied by a senior politician, Michael D Higgins. It brought together all the aspects of cultural policy, from the arts to broadcasting, from the Irish language to communications. Then it was gradually diminished.

This Government removed broadcasting and communications from its remit. In all the speculation leading up to the Cabinet reshuffle, and the appointment of Heather Humphreys as Minister for the Arts, political commentators have been unanimous in writing about the arts brief as a makeweight, a consolation prize, the next worst thing to being kicked out of the Cabinet altogether. Harry McGee referred, quite accurately, to the arts as “a junior ministry”. He and other well-informed correspondents suggested that the arts department might be broken up altogether, with Arts going to the Department of Education and Heritage going to the Department of Defence and Public Works.

One of the striking things in all of the political manoeuvring was the Labour Party’s complete lack of interest in securing the Arts brief. Under Michael D, Labour managed to identify itself very strongly with the creative community, to make the arts a part of its appeal as a vibrant, progressive force in public life.

Its success in doing so was noted, astutely, by Fianna Fáil, which set about taking back the image – previously cultivated by Charles Haughey – of being the party that cared about culture. There was in all of this at least a sense that the Arts “brand” was worth fighting for.

The run-up to the Cabinet reshuffle has made it brutally clear that this is no longer the case: in the political game, the arts are for losers. This matters because it has created a vacuum in long-term strategic thinking. Which is where this week’s second depreciating asset comes in: the Bord Gáis Energy Theatre in the Dublin docklands.

With the possible exception of the Wexford Opera House, the BGE Theatre is the best-appointed purpose-built arts venue in the State. It is perhaps the finest piece of development to come out of the madness of the Celtic Tiger: a signature building designed by Daniel Libeskind with top-class technical facilities, a vast stage and the ability to seat 2,111 patrons in comfort in an auditorium with excellent sightlines and acoustics.

A golden opportunity It is a hugely significant part of the arts infrastructure in Ireland: BGE alone accounts for half of all the theatre seats in Dublin. And it is now being flogged off by Nama at a knockdown price. The theatre, which cost €80 million to build, is on the market for €20 million.

If there were such a thing as a dynamic government policy for the arts, the future of the BGE would be high on the agenda. There will probably never again be an opportunity for the State to acquire such a superb piece of cultural infrastructure for so little money. Indeed, the State does not even need to acquire it, since it is actually in public hands already. At the very least, it would seem obvious for the Government to put a hold on the sale while it commissions an independent study of the best uses – artistic, civic and economic – of the venue.

Such a study would consider, for example, the fact that in its current usage as a purely commercial venue, the BGE sucks a huge amount of money out of the indigenous creative economy.

It takes in more than €8 million in annual revenue, but a great deal of this goes out of the country. Look at the current programme: Dirty Dancing, a touring version of the West End production; Avenue Q, presented the British- based Sell A Door company; Show Boat, presented by Cape Town Opera; Joseph and the Amazing Technicolour Dream Coat, presented by Bill Kenwright Productions. This is not untypical: the BGE functions as essentially part of the UK touring circuit.

Up to a point, this is inevitable, but it does create the odd situation in which arguably the premier arts venue in the State functions for the most part to make money for productions from outside the State. Irish performers, designers, producers and creators seldom have more than a marginal place in its operations.

If we had such a thing as an active government department with a real interest in the strategic development of what we’re now obliged to call the cultural industries, this is exactly the sort of question we might expect it to tackle. But we don’t and, as with so much else in cultural policy, the rest is silence. fotoole@irishtimes.com