Camille O’Sullivan’s version of ‘The Rape of Lucrece’, for the RSC, creates a wholly new piece of Shakespearean theatre 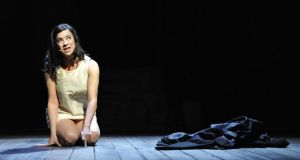 Over the centuries there have been important and original Irish contributions to the staging of Shakespeare, from Edmund Malone’s foundation of serious Shakespeare scholarship to Charles Macklin’s revolutionary interpretation of Shylock.

Camille O’Sullivan’s superb version of the early narrative poem The Rape of Lucrece, which is at the Waterside in Derry this weekend after its short run at Dublin Theatre Festival, is among the most wonderful. “Version”, indeed, is the wrong word, for this is a boldly daring act of invention, the creation of a wholly new piece of Shakespearean theatre.

The poem has a somewhat odd history. Probably if you asked most English intellectuals in the late 16th and early 17th centuries who this fellow Shakespeare was, they might well have said: “He’s the guy who wrote The Rape of Lucrece.”

The long narrative poem, published in 1594, when he was 30, was Shakespeare’s announcement of his own genius. It is a statement of literary respectability by a man dismissed as a provincial upstart. It is dedicated to the earl of Southampton. (The dedication is better known now than the poem itself.) It draws on the Roman authors Ovid and Livy, who themselves drew on the older legend of how the Romans, outraged by Tarquin’s assault on the exemplary Lucretia, banish Tarquin’s royal family and renounce monarchy for a republic. It also stakes a claim to be in the oldest English tradition: Shakespeare uses the “rhyme royal” stanza form that Chaucer had deployed. This is the ambitious young writer showing off and making his case for recognition as a distinguished man of letters rather than a jobbing member of the dodgy theatrical tribe.

It worked, too. The Rape of Lucrece went through six editions in Shakespeare’s lifetime and another three before 1655. Then it fell utterly out of favour.

The critical consensus is summed up by Robert Miola: “Most readers, impatient with Tarquin’s revolting will and with Lucretia’s stylised complaints to Night, Opportunity and Time, agree that such rhetorical exercise impedes movement and stifles dramatic potential . . . Efforts to re-evaluate the poem have not vindicated its lumbering movement, its disproportionate parts and its excessive rhetoric.”

The point about this consensus is that it is not far wrong. If ordinary readers approach The Rape of Lucrece at all, they do so not for its own sake but for its illumination of the development of Shakespeare’s art. The first half, in which Tarquin “holds . . . disputation / ’Tween frozen conscience and hot-burning will”, foreshadows the emergence of the great dramatic soliloquies.

The action itself is strikingly reminiscent of another act of violation, the build-up to the murder of Duncan in Macbeth. But if you extract the poem from its place in Shakespeare’s work it is indeed excessively showy and rhetorical.

It is also, in its narrative of rape, highly problematic. Lucrece is treated as a passively precious object – her body a work of art, her chastity a possession of her husband. She cannot revenge herself: she will be vindicated by her husband and her father, to whom she belongs. Her voice as a woman is all but lost in that formalised rhetoric: Tarquin, the rapist, is a much more memorably individual mind.

O’Sullivan’s performance is much, much more than a staging of the poem. What makes her approach truly original is that she doesn’t just perform Shakespeare’s text but challenges it. She possesses the poem not just in the sense that her remarkably assured stage presence gives her complete ownership of the material but also in the deeper sense of infusing her own controlling spirit into its outward body.

If Lucrece as written is a moribund object, the Lucrece that O’Sullivan performs is a living human subject. She takes a text about a passively possessed body and, by actively embodying it, transforms it.

With the pianist Feargal Murray and the director Elizabeth Freestone, O’Sullivan does three big things with the text.

The first is to perform both Tarquin and Lucrece, both rapist and victim. This creates a distance from Tarquin’s self-justifications and generates a raw drama in the tension inherent in travelling into the mind of a rapist through the voice of his victim.

The second is the songs themselves: the rhetoric that can seem so stiff to our ears is transformed into music. The formal rhythms of rhyme royal are given new life in smoky, potently expressive melody.

The third and most thrilling achievement is to literally give Lucrece a voice. O’Sullivan’s recitation of the verse has a lightness and softness that work against its grain in a way that seems at first to be simply out of kilter. But it pays off: her Irish cadences and gentle rhythms undercut the rhetoric and humanise the imagery of Lucrece as mere paragon of virtue, and this in turn makes her agony and death deeply moving.

O’Sullivan is even able to turn the male avengers of the end of the poem into a grieving husband and father. By making Lucrece a woman she also makes them men.

Shakespeare, surely, could never have imagined such a stunning feminine repossession of a work so replete with male narratives. Thanks to O’Sullivan’s brilliance, we no longer have to.

The Stairlift Ascends: An unlikely duo and their new Covid book
3

Don’t sing so close to me: Choirs in the Covid era
8