From a live-action Dracula radio play, to outdoor talks and tours of Stoker’s Dublin 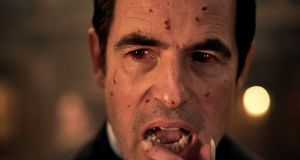 A  new Dracula is one of the highlight s of this year’s Bram Stoker Festival in Dublin over the October bank holiday weekend (October 25th-28th), the annual four-day celebration of the Irish writer, combined with a sometimes irreverent gothic-inspired programme, from family-friendly to late-night action.

Sounds of Wood on Muscle: A Modern Radio Dracula

The makers of Orson Welles’s 1938 live radio play Dracula cracked a hammer into a watermelon to create the sound for a wooden stake impaling a beating human heart. Matt Smyth and Eoghan Quinn of Collapsing Horse Theatre Co reckon they can do better with the entirety of modern technology behind them for Sounds of Wood on Muscle: A Modern Radio Dracula (Friday, October 25th, Saturday 26th, €18). Their live-action treatment of Welles’s radio play warps and twists the original for the world premiere – part tongue-in-cheek lecture, part live podcast, and part contemporary theatre – on the altar where Bram Stoker married Florence Balcombe in Dublin’s St Ann’s Church, Dawson Street.

Outdoor spectacle Night Watch is set in Grand Canal Dock, from dusk over all four days. Described as a water-borne theatrical installation (created by the Lantern Company from Liverpool), it involves a ghostly ship summoned from the dark, swathed in fog and foreboding lights, accompanied by an eerie, maritime forest of beings arising from the depths.

This takes place in total darkness in a sealed shipping container on Wolfe Tone Square, formerly a graveyard. The 20-minute immersive experience has played worldwide and promises to blur the boundaries between our world and the dead. October 25th-28th, from 1pm, €13

There are several doses of film horror at Meeting House Square (€16), including The Craft (October 25th), An American Werewolf in London (October 26th) and Lost Boys (October 27th).

Dracula: Behind the Scenes

While the Bram Stoker Festival is the four-day-long big cheese backed by Dublin City Council and Fáilte Ireland (bramstokerfestival.com), there’s a 10-day Halloween community festival dedicated to Stoker in the north-east inner city.

The Big Scream marks the fact that Bram Stoker lived on Buckingham Street for longer than any other place in Dublin. New research by local historian Hugo McGuinness makes a case that many building blocks for Stoker’s Dracula are rooted in the area and that he was influenced by what he saw and heard for six years living in the area.

The festival launches Bram Stoker in the North Inner City, a self-guided walking tour with a booklet by McGuinness (illustrations by John D Ruddy), drawing together of disparate records as well as new research. Other Big Scream highlights include Irish actor, Patrick Bergin (who played Dracula in a mini-series) interviewing Dacre Stoker in Dublin’s oldest operating library, Charleville Mall (October 25th, 7pm). There’s also an attempt to create a World Record for gathering the largest group of people dressed as vampires, and a Halloween night carnival on Seán McDermott Street (bigscream.ie).