‘You pray for Trump to hate your book, and you pray for him to tweet about it’ 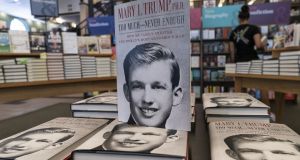 Since it was released in May, the latest book in the Hunger Games series, The Ballad of Songbirds and Snakes, has sold 1.3 million copies, a home run of a bestseller by publishing’s standards. Mary Trump’s memoir about her uncle, Too Much and Never Enough, outsold it in its first week.

Books about politicians and government are not considered surefire commercial hits. But since President Donald Trump entered office, books about his campaign, his administration, his family, his business, his policies, even his golf game have poured out of publishing houses big and small. And many of these titles have sold extraordinarily well.

“No matter what your political position, there’s really no doubt that the strong feelings around the Trump administration have pushed book sales in a way we’ve never seen before in the political arena,” said Kristen McLean, the executive director of business development at NPD Books, a market research firm. “The volume of bestselling titles is really remarkable.”

Early on in Trump’s presidency came the first big journalistic exposés, starting with Michael Wolff’s Fire and Fury and then Bob Woodward’s Fear, which sold more than 2 million copies.

Next came the insider accounts of the tumult within the White House from the many officials who resigned or were fired and sought to revive their reputations and fortunes with breathless, often news-making memoirs. Those included works by Anthony Scaramucci, who served for 11 days as the White House director of communications; Cliff Sims, another former White House communications aide; Omarosa Manigault Newman, former assistant to the president; James Comey, former FBI director; John Bolton, former national security adviser; and Anonymous, a senior figure in the Trump administration.

If there was any concern that readers would grow tired of tell-alls, it has been relieved by sales figures. Trump book sales are still soaring. This summer, Bolton’s book sold more than 1 million copies, while Mary Trump’s has gone into its 20th printing.

“Political books broadly have worked more or less in proportion to how polarising the figure that they orbit is, and you don’t get more polarising than Donald J Trump,” said Eamon Dolan, an executive editor at Simon & Schuster who edited Mary Trump’s book. “However you feel about the president in political terms or existential terms for what he might do for or to the country, he makes great copy.”

Despite how divisive Donald Trump has been as a leader, “Trump is a very unifying figure for book buyers,” Dolan added. Indeed, there have been plenty of hits by conservative authors who support the president, including Edward Klein’s All Out War: The Plot to Destroy Trump, Lee Smith’s The Permanent Coup, Gregg Jarrett’s The Russia Hoax: The Illicit Scheme to Clear Hillary Clinton and Frame Donald Trump and David Horowitz’s recent book BLITZ: Trump Will Smash the Left and Win. Donald Trump recently tweeted in support of a forthcoming book by the Fox Business host Lou Dobbs, titled The Trump Century: How Our President Changed the Course of History Forever.

Thomas Spence, president of Regnery Publishing, which publishes conservative titles, said political books usually perform better when they can rail against the opposition in power. But the Trump years have been good for Regnery. “We’ve had a lot of successes,” Spence said. The boom times have extended beyond dishy memoirs and firebrand defenders. Even the Constitution has sold unusually well. Sales of that document are up 40 per cent over the same period during President Barack Obama’s second term. And the Mueller report, which was public domain and available online for free, sold hundreds of thousands of copies when publishers released their own editions.

“Negative, positive, left, right? This last three or four years has lifted all boats,” said Robert B Barnett, a Washington lawyer who brokers major book deals on both sides of the aisle. Real-time political books detailing the inner workings of an administration have been a popular genre for decades, dating to the Eisenhower era. But the volume of titles, and the audience for them, has surged in recent years. With the rise of partisan-inflected cable news, and the growing polarisation of the media and the public beginning in the 1990s, when scandals surrounding the Clintons fuelled fury on the right and defensive tactics on the left, publishers started releasing more partisan books in an effort to appeal to readers across the political spectrum.

The subgenres that have emerged – books that praise the president, books that criticise him, White House memoirs, journalistic narratives – have taken off to an unprecedented degree under Trump, said Jon Meacham, a biographer and the author of books about presidents Thomas Jefferson, Andrew Jackson, Franklin Roosevelt and George HW Bush.

“Trump has heightened the interest in politics, for good and for ill,” he said. “It’s an inherently dramatic moment, it’s tribally fierce, it’s urgent, so there is this amazing appetite for all things political.” In the last four years, there have been more than 1,200 unique titles about Trump, compared with around 500 books about Obama and his administration during Obama’s first term, according to an analysis by NPD BookScan. There have been so many high-profile books about the Trump era that there’s even a forthcoming book about all the Trump books: What Were We Thinking, by The Washington Post book critic Carlos Lozada, who surveys some 150 titles that try to explain how Trump won and has governed, and what his presidency tells us about the country that elected him.

Also driving the unusually high volume and sales of Trump books is the churn of turnover in the West Wing, accelerating the normal timeline for insider accounts, which usually arrive after a president has left office. Trump has expressed his outrage over some of the books, responding with irate tweets and legal complaints that drive even more news coverage and further sales boosts.

Some in the industry credit the soaring sales of political books with lifting the industry overall in recent months, despite the pandemic and economic crisis. Print unit sales are up more than 5 per cent this year so far compared to the same period in 2019, according to NPD BookScan.

With just two months before election day, a bumper crop of Trump books is landing. Next month, Skyhorse, an independent publisher, is rushing out Disloyal, a memoir from Michael Cohen, the president’s former lawyer and fixer, who made explosive assertions about Trump’s behaviour in a foreword he released on his website. Skyhorse is anticipating a hit, with a first printing of 600,000.

Other significant Trump books coming next month include Woodward’s Rage, an investigative work that details Trump’s dealings with North Korea and his handling of the coronavirus pandemic; a memoir from Rick Gates, a high-level aide on the 2016 campaign and a witness in the Russia investigation; a book by Andrew Weissmann, the lead prosecutor in the special counsel’s office; a book about the FBI’s investigation into Russia’s election interference by Peter Strzok, a former FBI deputy assistant director of counterintelligence, and Donald Trump v. The United States: Inside the Struggle to Stop a President, by Michael S Schmidt, an investigative reporter for The New York Times.

There is also Melania and Me: The Rise and Fall of My Friendship with the First Lady, by Stephanie Winston Wolkoff, a former friend and adviser who has said she was forced out of the administration and “thrown under the bus” following reports about excessive spending on the inauguration, which she was closely involved in.

“There’s always some publisher or some agent saying the interest in Trump is exhausted, this book did really well, but no one wants to read anymore about this,” said Matt Latimer, a founder of Javelin, a Washington-based literary agency. “And then another book comes out that everyone wants to read. And it never ends.”

What happens after the election, however, is unclear. Many in the industry wonder if the so-called Trump bump can be sustained if Trump is defeated, and whether sales of political books would suffer a post-Trump slump. “There’s always been an appetite for good insider-ish books, but the merry-go-round of the Trump administration and the turbulence of the last four years have created a level of intense interest that probably won’t be repeated for some time,” said Jonathan Burnham, the publisher of the HarperCollins imprint Harper.

While Trump provides the source material for these books, he doesn’t appear to have the ability to increase sales of the ones he likes. Earlier this year, he posted on Twitter to his 86 million followers about a book called Trump and Churchill: Defenders of Western Civilization, by Nick Adams. According to NPD BookScan, the book has sold only 2,810 copies since May. Post Hill Press, which published it, said a follow-up, Trump and Reagan, was coming next year.

“When Donald Trump recommends a book, it has little impact on sales, but when Trump hates a book, it rockets to No 1,” said Latimer, the Washington literary agent. “You pray for Trump to hate your book, and you pray for him to tweet about it.” – (The New York Times News Service)