Coronavirus: I feel half between house arrest and solitary confinement

Writer-in-their-residence: Rosemary Jenkinson on struggling with stories in the current crisis 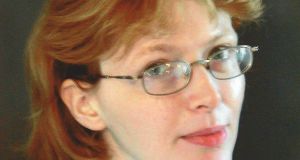 Rosemary Jenkinson: The cool-eyed, ice-hearted writer in me almost couldn’t wait to record these times. I threw myself into my chair in front of the computer, but the words didn’t come.

Creativity in a time of restrictions seems almost a paradox. My own creativity is inspired by the people I meet, but these days my only face-to-face chats are with my neighbours at Clap for Carers.

Like most writers, “send an invoice” are my three favourite words in the English language, but my income from festival readings and commissions has been decimated. Even in the best of times, we writers aren’t high earners. I once read that Conor McGregor made $40,000 a second for one fight and I probably earn about $0.0004 a second for one book, so all I have to do is get the noughts the right way round – how hard can that be?

Will the poverty of 2020 be good for writing? Probably. As Virginie Despentes says, “Nothing eases rage more than a large amount of money,” so I’m sure I’ll maintain a ferocious energy for the foreseeable future and, on the semi-bright side, Northern Irish arts funding is so paltry it feels like I haven’t lost as much as I could have. For now though, I’ll try to create for the sheer kick-ass joy of it and secondly to escape the slow dripfeed of diurnal deaths on the news.

As soon as the lockdown arrived, I thought to myself, “Right, let’s capture this moment.” The cool-eyed, ice-hearted writer in me almost couldn’t wait to record these times – compared to Covid-19, even Brexit seems like a mild case of catarrh. I threw myself into my chair in front of the computer, but the words didn’t come.

It’s been years since I’ve suffered from writer’s block and at times like this I reach for the wine or beer as my writing has always had a symbiotic relationship with alcohol – after all, ink is in drink – but even that failed to settle my mind.

It’s no wonder I feel jittery when everyday tasks like shopping have transformed into a perilous venture. You’d think I’d be able to cope, having grown up in the Troubles with the queues at the turnstile on Royal Avenue and the bag-checks, but it’s weird to be suddenly gloved up like I’m going for a quick smash and grab. It’s like I’m in Mission Impossible, flying in and out on a zip cord without touching a thing.

When I come home I’m paranoid about cross-contamination on my keyboard, so I keep leaving my desk to go and deep-clean myself. I’m washing my hands more than Pontius Pilate and the only new hobby I’ve acquired from lockdown is an obsessive compulsive disorder. At least I’m not quite at the Donald Trump phase of ingesting Domestos.

To be honest, we writers shouldn’t be complaining at all – look at Anne Frank who was confined to a tiny attic annex for two whole years and still managed to write her diary. Luckily, we’re permitted to walk and walking is the best means I know of generating ideas, next to having a shower or taking part in an extremely slow session of foreplay. At least I can no longer blame my lack of productivity on partying or my environment. The streets are so quiet they almost seem hushed in reverence for my creativity and it’s maybe the self-expectation deriving from perfect circumstances that’s stopping me write.

For the first time in my life, I feel utterly dependent on my computer. It’s my only voice to the outside world and I constantly worry that just like our economy it’s going to crash.

Social anger often propels me to write but at this time I’m almost speechless and wordless at the lack of PPE in hospitals and the tardiness in testing and tracing. The minor drawback to this anger is that it makes me want to write factual rants rather than fictional pieces, unleashing my own inner journalist.

It’s also hard to motivate myself when I’ve seen the postponement of books like Lucy Caldwell’s till next spring. Why postpone? Are publishers so rapacious they can’t cope with losing a few sales from a cancelled book-signing? The effect is to generate a massive logjam of new books for next year and a queue of new writing longer than the queues outside Tesco.

I wonder, though, when theatre can safely reopen. Of course, festivals will reopen once they figure out how to maintain social distancing because everyone will get jaded with endless free online YouTube from our beige living rooms. Technology is fine as a brief substitute but we can’t always be in camera on camera. I keep in touch with friends on Zoom but if I spend my day working on my computer I certainly don’t want to spend my night socialising on it too.

All this uncertainty enhances the precariousness of writers. I’m also aware that there are millions of furloughed people having the same lightbulb moment – “Why don’t I write my masterpiece?” though I laughed at John Banville’s advice in The Irish Times to leave book-writing to “those poor drudges, the professionals” and to learn instead to bake bread. Cue puns about writers loafing around.

In my area of East Belfast, building sites are dust bowls, detritus is scuttering along the pavements, weeds proliferate along kerbstones, testifying to a city in retreat, but creativity rises from these locked-down streets and recently I spotted a series of family portraits chalked on the brick walls of a house, signed by Georgia and Scarlett. Art is thriving in unpromising places. In one street, I was overjoyed to see neighbours sitting at tables on the pavement, drinking wine like they were out in the piazza.

It strikes me that I didn’t realise how tactile I was till social distancing arrived. How I long for those brief halcyon days in March of the elbow rub or the toe tap. There has, however, been a lot of sex in my backyard (not a euphemism). The pigeons have been mating like mad on the wall with wild skirmishes of wings and tumblings of fight, flight and delight. My own unfulfilled yearnings have already inspired a comic monologue for Fortnight at Fifty about a woman who fakes being a nurse just to be able to drive across town for some lockdown loving.

The harder the times, the more I long to write comedy. It feels great to counterbalance the darkness with laughter, but inevitably the two conflate and you end up with the type of searing black humour that makes Frankie Boyle look like Mary Poppins.

Corona nostalgia may be a big thing, as for the first time in our lives the world has stopped

Finally, and wonderfully, I started a new short story this morning. It arrived obliquely; a few days ago I came across a news story about a man who volunteered to be buried for three days and nights in the grounds of my local church to promote awareness of how drug addiction can kill. The idea of being buried alive in a coffin resonated with me and at last I’d found my perfect metaphor; this is what coronavirus means to me - a tale of stifling claustrophobia leavened with a sprinkling of surreal black humour.

Since March, newspapers have been publishing reading lists of either apocalyptic or humorous classics. There doesn’t seem to be an appetite for anything in-between, but I’m sure in a year or two people are going to love reading anything about lockdowns. Corona nostalgia may be a big thing, as for the first time in our lives the world has stopped, giving us, in WH Davies’s words, a surfeit of time “to stand and stare”.

This summer, worldly pleasures will have to be replaced by wordy pleasures as I’d rather create than aestivate. More than ever my motto is scribo, ergo sum. At the minute, I feel half between house arrest and solitary confinement, but the locks and chains are loosening and, even if it’s too early for pubs, surely the masked ball is poised for a fun revival. Life goes on and death goes on too. My aunt Moira died a few weeks ago in England of cancer and, while she may not be part of the coronavirus narrative, it meant that only ten of my family could attend her funeral.

Change drives creativity. The past weeks have been a time of new sights and sounds – the blast of the shipyard horn in praise of key workers; the nocturnal loners brandishing their eccentric walks by daylight; the fevered dreams through the night of being caught up in vast inescapable crowds. All these will feed into our imaginations and, ultimately, our experience of this strange reality will usher in a new creative sensibility. Struggle leads us to inspiration and, as any longstanding writer can attest: per ardua ad astra.

This essay was commissioned by the Irish Writers Centre as part of their Writer-in-their-Residence Programme in May 2020, supported by the ACNI. Rosemary Jenkinson’s new collection of short stories, Lifestyle Choice 10mgs, is available at doirepress.com