It can be marvellous to read other people’s letters, as ‘Love, Nina: Despatches from Family Life’ illustrates perfectly 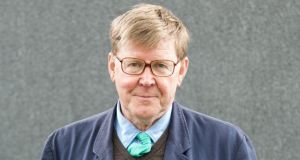 In 1982, when Nina Stibbe was 20, she moved from Leicestershire to London to take a job as nanny to two young boys. Her employer was Mary-Kay Wilmers, the editor of the London Review of Books.

Alan Bennett, Claire Tomalin, Michael Frayn and Jonathan Miller all lived on the same road, and Bennett (below) often called in for dinner.

But as the letters she wrote to her sister Victoria show, Stibbe, who initially thought Bennett had been in Coronation Street, wasn’t particularly impressed by her lofty neighbours.

Those letters have now been collected in a book called Love, Nina: Despatches from Family Life (Viking, £12.99), and no other book has given me more joy all year. Deadpan, charming and very funny, Love, Nina reads like a cross between Adrian Mole and I Capture the Castle.

Stibbe has clearly always been a gifted writer (her ability to capture dialogue is superb), but the book has the intimate immediacy that only letters can provide. And it reminded me just how much I love reading other people’s letters.

“The personal correspondence of writers feeds on leftover energy,” the novelist and New Yorker fiction editor William Maxwell wrote in his 1982 introduction to a collection of his friend Sylvia Townsend Warner’s wonderful letters.

“There is also the element of lavishness, of enjoying the fact that they are throwing away one of their better efforts, for the chances of any given letter’s surviving is 50-50, at most. And there is the element of confidence – of the relaxed backhand stroke that can place the ball anywhere that it pleases the writer to have it go.”

A writer’s collected letters can show facets of their personality, as different friends inspire different tones; a collection of letters between two people, meanwhile, gives a full picture of a relationship.

In Nancy Mitford and Evelyn Waugh’s letters, waspish wit never totally conceals their genuine affection. And in their own collected correspondence, it’s a delight to see Maxwell and Warner’s relationship evolve from the businesslike “Dear Mr Maxwell” and “Miss Warner”, in the 1930s, to a close friendship that lasted until her death, in 1978.

The internet has made such considered correspondences a thing of the past, but there is an awareness that something has been lost.

Simon Garfield’s excellent new book, To the Letter: A Journey Through a Vanishing World (Canongate, £16.99), pays homage to a unique literary form, pointing out that future historians and biographers looking at the 21st century will be faced with huge blanks where letters used to be.

But we can still look further back and enjoy the words writers never thought would reach us. “Do you think people . . . do write letters to be published?” Virginia Woolf wrote to Ottoline Morrell in 1932.

“I’m as vain as a cockatoo myself; but I don’t think I do that. Because when one is writing a letter, the whole point is to rush ahead; and anything may come out of the spout of the teapot.”