Woody Allen: ‘I’d welcome Dylan Farrow with open arms if she’d ever want to reach out’ 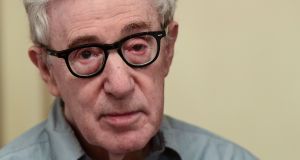 Woody Allen: in 1992 the director was accused of sexually assaulting his adopted daughter Dylan Farrow, an allegation he denies. Photograph: Miguel Medina/Getty

Woody Allen has written that he “would welcome Dylan [Farrow] with open arms if she’d ever want to reach out”, in his recently published memoir Apropos of Nothing.

In extracts published in the New York Times, the film director writes: “One of the saddest things of my life was that I was deprived of the years of raising Dylan and could only dream about showing her Manhattan and the joys of Paris and Rome. To this day, Soon-Yi [Previn] and I would welcome Dylan with open arms if she’d ever want to reach out to us as Moses [Farrow] did, but so far that’s still only a dream.”

In 1992, Allen was accused of sexually assaulting, in the same year, his adopted daughter Dylan Farrow, then aged seven, by Farrow’s adoptive mother Mia Farrow, after he separated from her. Allen denies the allegations, and was not charged after two investigations into them. Dylan Farrow renewed the allegations in 2014 and has been consistently supported by the investigative journalist Ronan Farrow, Allen and Mia Farrow’s son, while her older adopted brother Moses has defended Allen, principally via a lengthy blogpost published in 2018.

In other extracts, Allen says of Dylan that he “quickly found this tiny baby girl adorable and found myself more and more holding her, playing with her, and completely falling in love with her, delighted to be her father”. He also specifically denied accusations of “improper” behaviour towards her and that he put his head in her lap. “While Mia had gone shopping, after explaining to everyone that I had to be watched carefully, all the kids and the babysitters were in the den watching TV, a room full of people. There were no seats for me, so I sat on the floor and might have leaned my head back on the sofa on Dylan’s lap for a moment. I certainly didn’t do anything improper to her.”

Allen also rebuffed suggestions that he worked with Harvey Weinstein, writing: “I would never have allowed Harvey to back or produce a film of mine because he was a hands-on producer who changed and recut a director’s movie. We never could have worked together.”

Allen also had a riposte for actors who publicly announced they regretted working with him and were donating their salaries to charity. Allen wrote: “This is not as heroic a gesture as it seems, as we can only afford to pay the union minimum, and my guess is if we paid more usual movie money, which often runs quite high, the actors might have righteously declared they’d never work with me but would possibly leave out the part about donating their salary.”

He added: “Off the record, I had envisioned a little more peer support, nothing overwhelming, perhaps a few organised protests, maybe some irate colleagues marching arms linked, a little rioting, perhaps a few burned cars. After all, I had been a member in good standing of the creative community and was certain my predicament would infuriate my union brethren and fellow artists.”–Guardian