Sara Baume: I was so tired of my laptop, I felt compelled to work with my hands 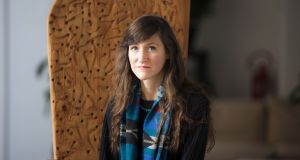 Sara Baume: To work with my hands had been my first choice.

There are two hooded crows who come to our bird table at the same time every morning. They sweep in over the mangled grass of the cow field, fingered wings outspread. They are the greyest of the crows; the whole solid middle of their bodies is the colour of fine ash, of dense fog. They perch on the fence to assess what I have put out for them; what stale bakes I have bought this week from the table of discounted produce in my local supermarket. It is a scone, most days, and at the weekends perhaps something sweeter - a cinnamon bagel, a few slices of Oxford lunch - crumbled and torn.

The crows are distrustful of my bird table, which is made of a Christmas tree stand fixed to a timber fence post fixed to a plastic drinks tray. It rattles in the wind and they flap up and hold in the air and smack it with their feet until the contents spills. Then they collect the scattered, fallen food from the ground.

Their call is like a bark, a knock. They know which room we sleep in, and if I sleep late, they knock, with their barking call, on the window.

The house my partner and I rent in west Cork is on a hill between fields above the coast. It’s unrelentingly windy and there are few trees. In handiwork, my third book and first non-fiction, I describe our convoluted struggle to attract birds to the spare, unsheltered garden. When we first moved here I had been under the impression that songbirds, in particular, are intractable – that they will return devotedly to the places where they know they can reliably feed, refusing to explore, to experiment. If a songbird has never visited a garden and found a food source before, or so I believed, it never would.

We humans are the tractable species, constantly changing and adapting, greedily speculating and colonising, and that is why our population is exploding, while the birds are in catastrophic decline.

Over the course of six months in 2018, my partner and I positioned different feeding vessels in different spots on every side of the house. We filled them with peanuts, mealworms, nyger seed. We hung fat-balls from the washing line and appended suet-stuffed coconut shells to the branches of the fuchsia shrubs. It was during the same period of time that I wrote handiwork, which at the beginning had nothing to do with birds, and by the end had a bird appear at least once every three pages – from the native and widespread to the exotic and rare, to the extinct; from the swallow through the storm petrel to the pinnated grouse.

After I had finished my last novel, I no longer felt compelled either to write or to continue to pursue the conventional career path of a writer. Things had been going well since I won a short story prize in 2014; I had been sustaining a certain momentum. By 2017, I was so tired of the dust-warped glow of my laptop screen, its crumb-jammed keys, the squeaky wheel of my office chair. Instead, I felt compelled to work with my hands – to cast off the desk and resurrect my tool box.

To work with my hands had been my first choice. I studied sculpture in college, but in the years since, outside the support of an institution, it had proved a prohibitively costly and cumbersome practice, and so I had turned to writing. In comparison to making sculpture, the practice of writing is magnificently compact and easily dispersed. It allowed me to say precisely what I meant in a form understood by everybody. And yet, by the end of book two, I was so tired of my own voice and the things I had said and meant with it. I longed to silently make small objects that were concerned with form, feel and colour; that I could touch, hold and smell; that nobody else saw or cared about.

When nobody appears to care, I believe this is when the most interesting art gets made. It surges up out of an unfounded desperation; it seeks no approval and yet seems weirdly urgent. Over the course of the last three years, working on my useless, pretty knick-knacks has felt, alternately, like a depressing waste of time and a welcome means of escape.

The birds represent a different kind of escape. While I have always been interested in the natural world – its details, patterns and processes – the fascination with birds has become unusually fervid, unusually focused. Here in Ireland, we have a vibrant variety of native species which is topped up, from season to season, by migrants and passage migrants. The birds are ever-present, and yet mysterious. Each individual existence is highly specialised and absurdly complex. I bought guides, took courses, and gradually learned how to negotiate the puzzle of clues which add up to a correct identification. My filofax which had, for three years, contained mainly the dates of literature festivals and the titles of books I intended to read filled up instead with bird sightings – a flock of fieldfares in winter, the first willow warbler of summer, two choughs on the chimney.

It was not long before the compulsion to write came back. At first it was because I felt awful about my growing body of bizarre handicraft – the money I was spending on materials and the waste generated by my repetitious methods – but most of all, I felt awful about the amount of time I was devoting to these impractical, unprofitable projects. I wanted to explain to myself the insistence I have always felt to work with my hands, to determine its origins. I grew frustrated, yet again, by the silence of my objects and returned, chastised, to written language – the grimy screen, the squeaky wheel. By putting something down in writing, I thought, I will be able to justify the waste.

This was roughly the point at which, out of the blue, an invitation to exhibit arose – a modest solo show in a publicly funded London gallery. Knowing that I was working toward a fixed point generated a new kind of urgency. I sharpened my concepts and drew three separate series to their conclusions; I started referring to the accumulated knick-knacks as “art”. The conversations I had with the curator during the months running up to the exhibition were formative in the writing of handiwork. She led me to consider the theory surrounding craftsmanship and amateurism, the value of labour and ritual. I found texts by authors such as Richard Sennett and Susan Stewart; I researched the lives of William Morris and John James Audubon.

During the six months I spent writing handiwork, I cast around for some scene which might draw it to an elegant close. In autumn 2018, the three series of small objects I had made since finishing my second novel travelled to London in twelve enormous lunchboxes. Then they were displayed – tastefully, delicately – in a huge white room for six weeks; then they were re-boxed and travelled home again. When the art arrived back at the house, I packed it away in the spare room without comment. This, I realised, was the scene with which my little book should end; between the mildew and the bare floorboards, with the unremarkable transition from one project to the next.

The last work gets put away, the new work begins, and this is how an artist should live – oblivious to the possibility of their own importance; ever ploughing silently on ahead with the next impractical, unprofitable project.

At the end of handiwork, the end of 2018, my partner and I still hadn’t managed to encourage any birds to our rented garden, but at the beginning of 2019, as if in synchronicity with the completion of the book, a great tit arrived, and then a couple of chaffinches. Two wagtails, two house sparrows, two dunnocks, a robin.

The songbirds had proved me wrong, and broken their habits.