Women in love: Moving on from the Cinderella fantasy of romance

Is the deeply ingrained idea that women need ‘the right man’ to complete them changing? 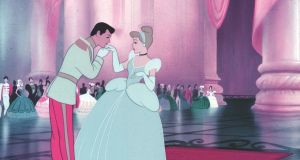 Fairy tales like Disney's Cinderella (1950) contributed to an unrealistic idea of romance: 'Even today, high-achieving women can still feel as if they are failing if they don’t meet the right man by the time they reach their mid-30s'

Edna O’Brien once claimed feminists found her fiction “unpalatable” because it dealt with themes such as love and longing. If so, it was their loss because in her writing and in an interview as far back as 1964 the Country Girls author was clearly ahead of her time in terms of feminist thinking. “What blights friendships and marriages and everything … is this little Cinderella dream that you get one man and one woman and that it lasts and they live happily ever after.”

“Wouldn’t it be marvellous,” she continued, “if a woman in love could simply say to herself it is beautiful for this moment and I’m with this man and the moon is round and tomorrow – God knows.”

O’Brien’s thoughts on the Cinderella complex are included in a timely book – for those who need reminding, Valentine’s Day is nearly upon us – Love Lives: from Cinderella to Frozen. It is a social history that charts the ways in which women’s lives, loves, relationships, divorces and dreams have been moulded and recast since 1950, the year of the original Walt Disney Cinderella. The book takes us from that iconic pop-culture moment right up to Disney’s Frozen in 2013, with its depictions of two princesses and their trifecta of much more modern concerns: sisterhood, loyalty and autonomy.

It’s a vast social, cultural and emotional landscape to traverse and one that the author Carol Dyhouse, professor emeritus of history at Sussex University, admits was ambitious, during a Zoom call from her home in Brighton. Why did she want to do it?

“I am obviously old now,” says Dyhouse. “I wanted to put it all together while I still have some grey matter left … I can remember the 1950s. It was about taking stock of these massive changes in the patterns of women’s marriage, the terrible shame of unmarried motherhood, the widening of education and employment opportunities, the softening of gender roles. It seemed important if foolhardy to try to make sense of them. And many of them dovetailed with my own life although it’s not a personal book in any way.”

The book deals predominantly with Britain and the US, and as such excludes reflections on Irish women dealing not just with societal mores but with the moral authoritarianism of the Catholic Church. Still, there are enough universalities to make it a compelling read.

In the chapter Cinderella Dreams: When Men Were an Ending, Dyhouse explores how in heterosexual relationships there were hazards for both sexes at the time in the unrealistic fairy tale of 1950s and 1960s romance. “For men there was the risk that if love failed at any point … you had effectively become a lifelong meal ticket”, where for women, marriage often “put a stop to any ambitions for self-fulfilment in a woman and a home of her own might easily turn into a prison” or they might end up as “the typist of someone else’s dreams”. Through the book, from Cinderella to Tinderella, Dyhouse illustrates how women’s (and men’s) expectations changed right up to the phenomenal success of Esther Perel, a British psychotherapist whose Ted talk The Secret to Desire in a Long-Term Relationship has been viewed 15 million times.

“It hasn’t been easy,” Dyhouse writes, “for women to let go of the Cinderella version of romance. Centring on fantasies of rescue and transformation, the idea that the right man would complete them and make their lives perfect. Even today, high-achieving women can still feel as if they are failing if they don’t meet the right man by the time they reach their mid-30s, especially if they want children.”

What keeps Dyhouse hopeful is staying in touch with new ways of thinking and living. “Every time I find people reporting new ways to organise their lives, I get very encouraged,” she says. “One thing I read after I finished the book was a woman arguing that there are now websites for people who want to do platonic co-parenting, rather than advertising for a lover or a potential husband or romantic partner. You can say, I’d like to have a child and find a man that would like to have a child with you and you don’t have to be in love but you agree you have a contract to co-parent. Some people will say, well, this is, you know, gosh, a really weird modern idea. But I thought in a kind of way, it’s like going back to what was before, the sort of pragmatic unions I write about at the start of the book.”

She concedes that historians are dismissive of other historians who chart “simple stories” of progress or improvement. “And I would have been very uneasy about doing that when I was a full-time academic historian,” she says. “But there has been progress. I mean, who would want to go back to the shame of the 1950s, and the lack of control over your own body and being kept out of the workplace? Who would want to give up on a terrible educational provision for girls and women? I’m being careful because I know things can go backwards as well as forwards, and I’m really perturbed by what’s happening, say, over abortion rights in Poland, or what might happen in America.”

“I’m not complacent, but I think things have improved. I mean, the other thing is, I handed the book to the publishers before Covid. And a lot of my younger colleagues now are having a hard time, the ones with children, I think that there’s definitely evidence that a lot of women are finding it harder to have equal access to work time, when they’re stuck in their home with the kids … so I can see that there are setbacks, and history is often one step forward, two steps back.”

In what is her fourth book exploring women’s lives, Dyhouse returns to the sense of “men as an ending”, of young women in their teens marrying out of a desperate desire for the Disney fairy tale. Dyhouse, in her uplifting conclusion, credits feminism for shoring up romantic love rather than weakening it. Feminists have often been dismissed as “Cinderella’s ugly sisters”, unable to find husbands, bristling with anger and resentment and conspicuously lacking in femininity, posits Dyhouse in the book. “By the 1990s many young women had become diffident about identifying as feminists because they didn’t want to appear hostile to men.” But, she asserts, the suspicion that feminism is somehow responsible for undermining romance and damaging family life “dies hard”.

“Feminism and the changes of the last 50 years haven’t destroyed love at all … but perhaps it gives people a bit more strength to fall in love. I think on balance, if you fall in love as a confident person with some self-assurance, things are going to look better for you than if you fall in love out of desperation and loneliness and a feeling that nobody will ever love you … if you shack up with someone now, it’s a beginning. It’s not an ending.’ And what happens then – “God knows”, as Edna O’Brien once so eloquently put it.

Love Lives: From Cinderella to Frozen by Carol Dyhouse is published by Oxford University Press