O’Connor was ‘pernickety and controversial’ and loved to play with words, mourners told 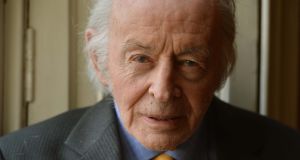 The funeral of Ulick O’Connor, who died on Monday, was held today. Photograph: David Sleator

“Nothing of the sort. In many ways Ulick was intimate with Jesus. In some ways he was a Christ-like figure himself. If Ulick can teach us anything it is this: the impertinence of asking radical questions about our lifestyle, about the society we are building. As a man of faith, he knew death was merely a gateway to another life,” the priest told the congregation.

The funeral of Ulick O’Connor, writer, poet, historian and public intellectual, a contrarian and a controversialist, was held at the Church of the Three Patrons in Rathgar, and area where he lived throughout his life in Fairfield Park, his childhood home. The event offered a window onto his life.

Fr Ryan said O’Connor had much in common with the founding rector of his former university, UCD, Cardinal Newman, who will be canonised this weekend. “Both were pernickety, controversial, somewhat contrarian. They both loved words,to play around with the English language, and chose targets from both the top of society and the bottom of the heap.”

He described him as “an unusual respecter of persons; he had that respect regardless of your social standing or station in life”.

“If at times the voice of Ulick came across as sharp, as shrill, it was because he was impatient, with fake news and with insincerity,” said Fr Ryan. “He was a witness for fairness and justice. We can say of Ulick what Goldsmith said of his Village Schoolmaster,” quoting the poem: “Yet he was kind; or if severe in aught, The love he bore to learning was in fault.” He added that “Ulick was a great man for the learning”, describing the breadth of his scholarship and interests, and his prodigious writing.

O’Connor died on Monday, aged 90, and was buried a day before his 91st birthday .

Chief mourners were his niece Mary (daughter of his late sister, Nóirín Buckley), along with her sons, his grandnephews Neil, Mark and Peter Buckley and his long-time personal assistant and friend Anna Harrison.

O’Connor was the eldest of five children; his brothers Michael, Garrett and Donough also pre-deceased him.

The eulogy was read by actor Patrick Bergin, who recalled watching “Ulick and Gaybo on The Late Late Show, arguing in their pomposity. To a young kid in Drimnagh, I thought they were awful eejits altogether.”

But later when he came to study literature, Bergin said, he came to respect O’Connor’s understanding of Irish literature. He had “the good fortune, some years later, to become part of Ulick’s circle,” he said, when he performed with Adrian Dunbar in a 2005 revival of O’Connor’s 1988 play, A Trinity of Two.

It was, said Bergin, a difficult subject matter, dealing with Oscar Wilde’s trial and Edward Carson. As an indication of O’Connor’s character and great warmth, Bergin recalled O’Connor telling him to bear in mind when playing Edward Carson (barrister for the Marquess of Queensberry) that after the trial, “remember this, Patrick: Edward Carson said, ‘No, the man has suffered enough’.”

Bergin read from WB Yeats’s The Song of Wandering Aengus, and concluded with a quote from Dylan Thomas’s poem And Death Shall have no Dominion.

Symbols of his O’Connor’s life were brought to the altar: a hat, a trophy for winning welterweight boxing champion of British and Irish universities in 1950, a copy of the Irish Independent and his biography of Oliver St John Gogarty, to represent his profession as a barrister, and his sporting, journalistic and literary lives.

Organist David McConnell accompanied tenor Paul Byrom for hymns including Morning has Broken, Psalm 23 (The Lord Is My Shepherd), Schubert’s Ave Maria, Panis Angelicus and, at the end, You Raise Me Up.

At the end, O’Connor’s niece Mary Buckley read his poem Requiem for a Nanny, written for Annie Bell from Tyrone, to whom he was very close.

Outside the church, there were many escapades and rows recounted. Mourners said he was a man “not slow to pick an argument”, but one who also showed great kindness to people.

Ex-Horslips musician and journalist Eamon Carr and artist Paddy Gilsenan described O’Connor as good company. “He was feisty, and had a great ability to start a row,” says Carr.

Writer Anne Haverty recalls how her late husband, poet and novelist Anthony Cronin, and O’Connor had “an ongoing love-hate thing since they were students. We saw a lot of him. He was proud to be in Aosdána.”

She recalls being in Paris at the same time one Christmas in the 1990s and discovering O’Connor “was a boy magician, and was doing tricks, taking coins from our ears”.

Journalist Alan Sweetman’s first job was as researcher for O’Connor’s book Celtic Dawn. “We used to meet in the Shelbourne every Wednesday and compare notes. Despite what people say, he was a great person to work for.”