Book review: Anne Applebaum shows how any society can turn against democracy 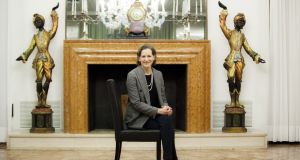 Anne Applebaum is a leading historian of the era when rulers visited terror upon their own subjects, and the existence of democratic institutions appeared an unattainable ideal in the face of arbitrary and violent coercion. Her signature achievement is Gulag: A History (2003), an award-winning history of the terror of concentration camps during the reign of Stalin.

This began a sequence of histories, including a study of eastern Europe in the aftermath of the second World War, and concluding with a visceral recounting of the ravages of the Ukrainian famine. Applebaum has looked into the darkest corners of history on the continent of Europe. Her works peer into the crevices of the foundations of our current nations and cultures, where inhumanity to our fellow human wreaked pitiless cruelty.

1 Covid-19 incidence in the Republic set to surpass that of UK
2 When will the first Covid-19 vaccine be used in Ireland?
3 ‘Customers are very confused’: Motor dealer outlines EV reality
4 Coronavirus: Non-essential travel from US set to be banned within days
5 ‘Our hearts are broken’ – implications of fresh lockdown sink in
6 Covid-19 cases in Co Kildare running at almost eight times national average
7 Radical road plan for Sandymount could be ‘fantastic’ or ‘disastrous’
8 Face coverings now mandatory in shops and other indoor settings
9 Ken Early: PSG would be sensible final move for Ronaldo
10 ‘I have become a shouter, and I am worried it is damaging my children’
11 Survey finds ‘huge appetite’ for remote working
12 Covid-19: Carroll’s Cuisine in Tullamore urged ‘to close’ amid outbreak
13 Una Mullally: Covid-19 has exposed the serious injustices of Irish society
14 The Offload: Joe Schmidt the influencer is due a second act
15 A new breed of superstar - Collin Morikawa wins US PGA
16 Sea-swimmers wanted for NUIG study into spread of superbugs
17 New call centre to track all passengers arriving into the State's ports and airports
18 Man whose remains lay undiscovered for 10 years to get family burial
19 UK criticised for ‘unforced errors’ on post-Brexit trade deals
20 Ronnie O’Sullivan: snooker’s next generation are ‘so bad’
21 Coronavirus is new, but your immune system might still recognise it
22 Asylum seekers without Leaving Cert now eligible for third-level grant
23 Is the Government asleep at the wheel over motor tax revenue?
24 Spare me the city-dweller’s longing for a rural idyll
25 Taoiseach tested twice for Covid-19 but excused quarantine after Brussels trip
26 Coroanvirus: Australia reports record single day rise in deaths
27 Are we really facing the death of the office?
28 Face masks developed in Ireland can help meat-plant workers
29 Maureen Dowd: The hell that awaits a woman vice-presidential candidate
30 Meath creche awaits test results after two cases of Covid-19
31 Hong Kong media tycoon Jimmy Lai arrested under new security law
32 Google to roll out software fix to remedy issue with Covid app
33 Netflix: 10 of the best new shows and films to watch in August
34 Irish in Australia: ‘We are in for a few hard years’
35 Masks Q&A: Who has to wear them in shops and what happens if you don’t?
36 Want to exercise but can’t face going for a run? Here’s what to do
37 Irish company insolvencies expected to spike near crisis level of 1,700 next year
38 How vulnerable Irish in Zimbabwe have been helped during the Covid-19 crisis
39 Champions League quarter-finals: game by game verdicts
40 Midlands lockdown Q&A: Firstly, is it a lockdown or not?
Real news has value SUBSCRIBE