Tried and found wanting: The Children Act, by Ian McEwan

Review: the chillingly formidable author has produced an ill-judged study of a legal mind 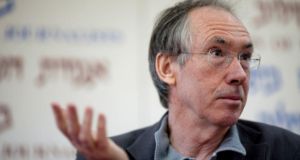 Ian McEwan: efficiently infiltrates the legal world and its hierarchy of clever debate conducted upon the chessboard of the law, but his novel is knowing and corny. Photograph: Uriel Sinai/Getty Images

Ironically the most telling sentence in Ian McEwan’s slight, TV-drama-like new novel comes in the form of a casual observation made by the central character, a successful if clearly harassed High Court judge. While presiding over a case concerning the refusal of Adam, a teenager and his parents, all Jehovah’s Witnesses, to agree to a vital blood transfusion for the boy, she muses privately as to the social origins of the father’s accent. “A touch of cockney, a fainter trace of West Country – the confident voice of a man who took his own competence for granted … Certain British jazzman spoke this way, a tennis coach she knew, and non-commissioned officers, senior policemen, paramedics, an oil-rig foreman who had once come before her. Not men who ran the world, but who made it run.”

The remark reveals more about McEwan than it actually does about Judge Fiona Maye. But then this knowing, corny novel is so heavily weighted by ideas and by McEwan’s interest in, and ability to penetrate, the essence of complex professions, it is only to be expected. Just as in Saturday (2005) he penned a whistlestop tour of neurosurgeon Henry Perowne’s self-absorbed complacency, McEwan here efficiently infiltrates the legal world and its hierarchy of clever debate conducted upon the chessboard of the law.

McEwan’s judges and barristers exchange banter, talk shop and enjoy in-house classical music concerts, often, it seems, after having used logical argument to overrule, and ridicule, religious belief. It all seems very chummy and cold. There is a stagey, satirical edge to the prose with its replications of carefully researched cross-examination and point-scoring. Adam’s building contractor father is sneeringly described by the judge’s clerk as being “apparently a virtuoso with the mechanical digger”. McEwan plays all manner of game with overly-detailed descriptions such as when the judge returns home to check if her erring husband has collected more of his clothes. She opens his wardrobe “and with a wifely eye calculated that he had taken three jackets, the newest of which was off-white linen from Gieves & Hawkes”.

It may seem excessively self-indulgent for an allegedly bohemian 60-year-old academic to order bespoke jackets from one of the oldest tailoring firms in the world (it was founded in 1771) but McEwan has already rendered Jack, the judge’s husband, as a posturing idiot who bases his intention to pursue an affair on the couple not having had sex for “seven weeks and a day”. It is unreasonable, considering the professional pressures she is under, yet Jack is merely light relief and more suited to a 1970s campus romp.

Even more odd, though, is the fact that McEwan does not capitalise on the most compelling situation with which he could test Fiona. Before the narrative begins she had just made a judgement approving the surgical separation of conjoined twins which would result in the immediate death of one of the infants. It is the most dramatic – and sympathetically presented – event in the novel and certainly offers McEwan the possibility of making Fiona Maye one of his more enduring characters. It could have made for a devastating novel.

Instead, he quickly moves on from her initial remorse and towards a succession of cases, all taking side-swipes at the world’s major religions, leaving the reader to consider if the most serious problem facing a child, aside from having parents, is dealing with the laws set down by various gods more committed to the afterlife.

Quiet, capable Fiona is presented as a quasi-tragic figure, the victim of a great career which left her no time for children. McEwan fails to notice that aside from Fiona having made her own choices, her husband is in fact her child, and when he leaves it is only for one disastrous night of experimental adultery. Jack crawls home.

The marriage is thinly described, although this privileged professional couple inhabiting McEwan-land, an increasingly rarefied London curiously devoid of the working classes, do share a liking for quality coffee. He creates the impression that not only do childless couples enjoy extended sex lives; they also sustain teenage egos well into late middle age.

The central plot, such as it is, concerns Adam, the Jehovah’s Witness boy, and Fiona’s decision to visit him in hospital. There she is confronted with his frail beauty and jaunty intelligence. Adam, three months shy of 18, seems more like a precocious six-year-old and suggests that McEwan, so good on menace, is, aside from On Chesil Beach (2007), far less convincing on charm. The dying boy writes poetry and is also learning the violin. Thrilled by her presence, he plays a tune that she recognises as Yeats’s Down by the Salley Gardens and she delights the youngster by singing the words of which he had been unaware. All very innocent; yet this is McEwan, albeit in a softened mood. Adam certainly takes to the judge, obsessively so.

The decision to conclude the novel with a homage to Joyce’s masterpiece The Dead, degenerates into a brave if ill-advised parody. The daunting emotional power Joyce reveals in that story is a quality absent from the 1998 Booker Prize-winning McEwan’s chillingly formidable repertoire.

The Children Act is heavily rooted in legal research. Although short, it is very wordy. The characters prove an opinionated bunch. Fiona Maye is merely the tantalising shadow outline of a potentially interesting creation. Always an astute, confident writer, McEwan is at his best in the first 200 pages of Atonement (2001) or in his terrifyingly real third novel, The Child in Time (1987), a major work which remains his most cohesive achievement. Here, he has set an unconvincing love story adrift in a pond of formulaic courtroom anecdote.

Perhaps his next character facing a mid-life crisis will be an engineer? At the very least Ian McEwan can be relied upon meticulously to research the load-bearing capacity of suspension bridges.