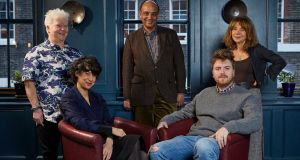 Three Irish novelists have made the 13-strong longlist for this year’s £50,000 Man Booker Prize. Donal Ryan, previously longlisted for his debut The Spinning Heart, is nominated for From a Low and Quiet Sea, Sally Rooney for Normal People and and Anna Burns for Milkman.

Ryan said: “I never dreamt that I’d be nominated in the first place. For it to happen twice, it was pretty unbelievable.” Rooney admitted: “It was quite a surreal, a strange feeling,” while Burns said: “Speaking short-term, I heard that within a day sales of Milkman went up. In monetary terms that’s an impact. Publishers will definitely like that sort of thing and might then be accommodating if I should go to them a wee bit later with some sketchy, hare-brained plan of possible further work and say, ‘How about you give me money to write this?’

Coming up in The Irish Times on Saturday, Shane Hegarty celebrates the 40th anniversary of Douglas Adams’s absurdist scifi classic The Hitchhiker’s Guide to the Galaxy; Brian Maye profiles Emily Brontë on the bicentenary of her birth; Michael Hughes, author of Country, examines the influence of his family and a Greek classic on his Irish Border epic; while Liam Heneghan, author of Beasts at Bedtime, explores his family’s storytelling tradition.

We also publish July’s winning Hennessy New Irish Writing short story and poems; plus Eamon Maher on John McGahern, the scriptwriter; Michael O’Loughlin on The Poem by Don Paterson; Ed Power looks at the best new scifi; Eileen Battersby on Brother In Ice by Alicia Kopf, translated by Mara Faye Lethem; Patrick Freyne on Hits and Misses by Simon Rich; Joe Humphreys on Out of My Head by Tim Parks; Seán Hewitt on The Day the Sun Died by Yan Lianke; Sarah Gilmartin on Feast Days by Ian McKenzie; and Julie Parsons on The Songlines by Bruce Chatwin.