The Witches: Salem, 1692, by Stacy Schiff: maybe the devil made them do it 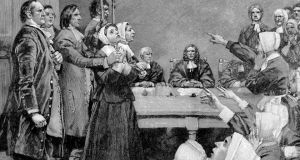 As though I hadn’t yet heard of the internet, I have in my files an actual yellowing newspaper clipping from a 2012 New York Times, headlined “Hysteria and the Teenage Girl”. The article mentions the strange happenings of the previous year, when a healthy high school cheerleader in Le Roy, New York, lay down for a nap and awoke to a strange set of symptoms: facial tics, uncontrollable movements, stuttering, verbal outbursts.

Within weeks, more than a dozen other girls and one boy in her school were displaying similar symptoms. By the time the New York Department of Health ruled out infection, communicable disease and environmental factors, there had been much media attention. Two of the girls appeared with their mothers on The Today Show, twitching and flapping, saying they wanted answers.

The eventual diagnosis was conversion disorder, the subconscious transformation of stress into physical symptoms. Because so many students manifested similar symptoms, it was also deemed a mass psychogenic illness, formerly known as mass hysteria. What are called mirror neurons are thought to be involved in such outbreaks of group sickness – neurons that have been linked to empathy, and to everyday instances of copycat behaviour, such as yawning when a companion yawns.

Not surprisingly, neither the girls nor their parents were keen on the neurologists’ conclusions. One girl’s guardian said, ‘What are we, living in the 1600s?’

We can assume she was referring to the Salem witch trials of 1692, when, over a nine-month period, the Massachusetts Bay Colony executed 14 women, five men and two dogs for witchcraft.

It all began in late January, when 11-year-old Abigail Williams and her nine-year-old cousin Betty Paris (the daughter of Salem’s minister) began to bark and yelp. They suffered spasms, went limp, made frantic gestures and spoke in gibberish. They claimed they were being pinched and bitten.

The ghastly chain of events the girls set off is the subject of this new book by Stacy Schiff, author of the Pulitzer Prize-winning Véra (Mrs Vladimir Nabokov) and, more recently, Cleopatra: A Life.

Witch trials were certainly not unheard of in the late 17th century, but Salem had its own set of insecurities that fuelled the paranoia. A military coup in 1689 had ousted the Crown’s governor, and Massachusetts remained without political authority. Indian attacks were a reality, and a recent raid in Maine had left a mutilated minister dead on his doorstep.

New Englanders lived in isolated settlements, “in dim, smoky, firelit homes . . . very much in the dark . . . where the sacred and the occult thrive”. The Puritans of Salem believed that one was selected before birth for salvation or damnation, which left them edgy, inwardly focused, worrying their way through the world. Infant mortality was high, and many children who survived saw their mothers perish giving birth to their siblings. They knew what the dead looked like in their coffins. As for their own souls: “It was never too soon to address one’s depravity.”

As spring came to Salem, a core group of eight girls assumed “oracular import”. Accusations of witchcraft multiplied. By the time the Court of Oyer and Terminer was established in May, 62 people were in custody. Not one of the justices had formal legal training; all were part of the colony’s “self-perpetuating elite”.

The chief magistrate was possessed of a particularly self-righteous zeal. In the first three months of the trial, only four people confessed to witchcraft, including a four-year-old, but by August “confessions bloomed faster than afflictions”. Confessed witches were spared. Those who refused to acknowledge guilt were convicted.

Initial accusations had focused on village outcasts and the otherwise powerless. In time, however, some of the most respected members of the community were accused. Among them was Giles Corey, who, by refusing to enter a plea, denied the court’s legitimacy and was effectively tortured to death by slow crushing.

What drove the events of 1692 was, Schiff writes, as mysterious to Salem’s residents as it is to us, involving as it did “subterranean fairy circles of credits and debits, whispered resentments, long-incubated grudges, and half-forgotten aversions. Even at the time, it was clear to some that Salem was a story of one thing behind which was a story about something else altogether. Much of its subtext is lost to us, like the jokes in Shakespeare.”

Schiff works to recreate that subtext, the texture of Puritan existence at the time, and the results are often interesting. She delivers compelling accounts of the big stories, but also goes into exhaustive and often repetitive detail about the goings-on, information that does little to deepen our understanding of a subject already much studied.

It becomes hard for the reader – as it was for the locals – to keep track of who is biting whom, who is flying around whose back yard: “So many stood accused that witnesses confused their witches.” Thomas Putnam alone made more than 120 accusations. It was safer to be afflicted than accused, wise to name names before anyone named yours.

Why did things spin so out of control? The trials, with their gleeful inversion of power between pubescent girls and greying male justices, have lent themselves to a lot of theorising over the centuries. Schiff doesn’t engage much in interpretation, providing instead minimal, often deadpan commentary. She has written a meticulously documented and straightforward account that is by turns compelling and dull, and it isn’t clear what the book aims to add to the already huge body of existing literature.

The story of Salem remains relevant, as fairytales and myths are relevant, because the impulses that drove the trials are still very much in us, finding their modern manifestations in mass incarceration, capital punishment, surveillance, the fear of refugees, the fear of terrorists.

Schiff doesn’t note these resonances, presenting the witch hunt as though it is largely unmoored from our contemporary selves. She refers to the trials as America’s “national nightmare”, which is just silly. (How about slavery? The US civil war?)

In any case, it’s a nightmare from which Salem seems to have awoken. The city’s high school mascot is a witch, and Salem police cars have silhouettes of broom- straddling witches emblazoned on their doors.

Molly McCloskey is the author of Circles Around the Sun: In Search of a Lost Brother, published in paperback by Penguin