The Undoing Project: A Friendship that Changed our Minds Review 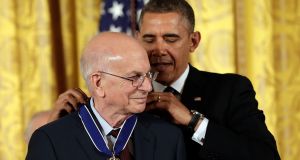 U.S. President Barack Obama awards the Presidential Medal of Freedom to Daniel Kahneman in the East Room at the White House in November, 2013.

Book Title:
The Undoing Project: A Friendship that Changed our Minds

Lennon and McCartney, Watson and Crick, Gilbert and Sullivan, Fred and Ginger, Kahneman and Tversky. The presence of the last pair in this short list will strike many people as odd, but perhaps not for long.

In The Undoing Project: A Friendship that Changed our Minds, Michael Lewis does what he can to ensure that the most renowned experimental psychologists of modern times obtain historical recognition. In this task, Lewis has a strong case. He also has gripping raw material.

From the late 1960s, for two decades, Daniel Kahneman and Amos Tversky designed scientifically groundbreaking yet simple and intuitive experiments on human judgment and decision-making. The results have influenced and continue to influence individuals, organisations and governments worldwide.

Readers can try the experiments on themselves. In my experience, almost all who encounter Kahneman and Tversky’s classic tests get a psychological double hit: an immediate burst of mental energy combined with a sudden loss of confidence. They are left wondering about their decisions and how they can be so easily fooled.

That ought to be enough for any work of non-fiction. Yet the story of Kahneman and Tversky offers so much more. There is war, heroism, genius, love, loss, discovery, enduring loyalty and friendship. It is epic stuff.

It was clear from a young age that Danny Kahneman was a boy blessed with a brilliantly creative mind, but he was also a Jewish boy in Nazi-occupied France. After fleeing Paris and enduring multiple near-calamities, the Kahnemans ran from town to town, eventually hiding in a rural village. Danny went to the local school, trying his best not to arouse suspicion by appearing too clever. Their home and hiding place was a chicken coop. For Danny’s beloved, diabetic father, without access to medicine, it would be his final resting place.

After the war, mother, older sister and Danny moved to Palestine in search of a new life. They found a new war – the Israeli war of independence. A bullet came through his bedroom; his scout leader was killed. Just a teenager, he already viewed the world through a psychological lens: “It was so completely different. Because you are fighting. That is why it is better. I hated the status of being a Jew in Europe. I didn’t want to be hunted. I didn’t want to be a rabbit.”

Both Kahneman and Tversky would end up fighting for Israel in multiple wars, repeatedly interrupting their academic careers to soldier for Israel. This cause they had in common, along with outstanding intellectual ability and, curiously, being grandchildren of East European rabbis. Yet their personas were poles apart.

Kahneman was bookish, unathletic, pessimistic and insecure; difficult to talk to and with few friends. Tversky was confident, optimistic, humorous and brilliant, and knew it. People couldn’t stop talking to or about Amos. The joke among psychologists was that the way to tell how smart someone was by how long it took them to work out that Amos was smarter than them.

The son of a female member of the Knesset (Israeli parliament), Amos Tversky excelled at school and, it seemed, in life. As a paratrooper, he won a military award after rescuing a comrade who had fainted while setting a bomb. Ignoring orders, he lifted the man clear and lay on top of him as the explosion sprayed shrapnel everywhere – including into Amos.

Although occasionally crossing paths before, Daniel Kahneman and Amos Tversky began their relationship in the psychology department of Hebrew University, where Amos experienced something that, for him, was highly unusual. Someone tore his argument to shreds. Having invited Amos to address his class, Danny found the material psychologically implausible and told Amos so in no uncertain terms. It was love at first slight.

For days afterwards, Amos’s friends saw that he had changed. For decades afterwards, Amos liked nothing better than sitting alone in a room with Danny. The feeling was mutual. They argued about how the mind worked, they built theories to encapsulate it, they designed experiments to test it, then analysed the results and tweaked the theories. Yet on the other side of the closed door, passers-by would say that all they could hear were regular bursts of laughter.

From this heady academic bromance, came a stream of scientific discoveries, breakthrough papers and, after a while, Ivy League professorships.

Kahneman and Tversky revolutionised how we understand judgment and decision-making. They showed that people tended to judge how likely outcomes were not by how often they occurred but by how easily they came to mind. They proved that the judgements and decisions of even trained experts could be altered by seemingly irrelevant details in the way problems were presented. They revealed that while most people were generally averse to risk they would nevertheless take large gambles to avoid losses.

These are few among many findings that transformed what we know about human behaviours. For all the apparent sophistication of the human mind, our reasoning follows quite simple rules of thumb. These are effective in many contexts, but lead to systematic error in others. Kahneman and Tversky’s legacy is that they were the first to understand this; first to reveal key rules of thumb.

Economists, who for decades have approximated human behaviour with the assumption that people rationally pursue their own self-interest, are still trying to come to terms with this legacy. It is no exaggeration to say that these two scientists discovered that an entire academic discipline was making basic mistakes. Behavioural economics was born.

Eventually, perhaps inevitably, the pair fell out. Tversky, the more technically gifted, received too much of the credit, especially in America. The friendship could not cope. Yet when, tragically, Tversky was diagnosed with terminal cancer, there was a final coming together. He died in 1996, aged 59. It was Kahneman alone who, as a psychologist, accepted the Nobel Prize in Economic Sciences in 2002 – Nobels are not awarded posthumously.

Michael Lewis is one of the best non-fiction writers of our time. The writing has wit, passion and scientific credibility. Apart from an unnecessary opening chapter that applies the Kahneman and Tversky’s science to basketball, it really is epic stuff.

Pete Lunn is a behavioural economist at the ESRI and author of Basic Instincts: Human Nature and the New Economics, published by Marshall Cavendish.