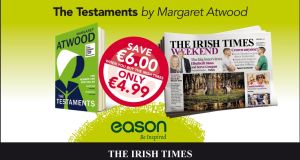 The Testaments by Margaret Atwood is this weekend’s Irish Times Eason offer. You can buy a copy of the bestselling sequel to The Handmaid’s Tale for only €4.99, a saving of €6, at any Eason store this Saturday on purchasing a copy of The Irish Times.

Andrew O’Hagan discusses his working-class roots with John Self in Ticket while Patrick Freyne talks to Mark O’Connell about his debut collection of essays in the Magazine.

Reviews include Catriona Crowe on Burning the Books: A History of Knowledge Under Attack by Richard Ovenden; Lucie Shelly on The Glass Hotel by Emily St John Mandel; Clíona Ní Ríordáin on Roy Foster’s On Seamus Heaney; Sarah Moss on OK, Let’s Do Your Stupid Idea by Patrick Freyne; Sarah Gilmartin on Diane Cook’s Booker-longlisted The New Wilderness; Barry Pierce on the rest of the Booker longlist that we haven’t yet reviewed: Douglas Stuart’s Shuggie Bain, Avni Doshi’s Burnt Sugar, Gabriel Krauze’s Who They Was and Maaza Mengiste’s The Shadow King; Seán Hewitt on Just Us: An American Conversation by Claudia Rankine; Lucy Sweeney Byrne on Beloved (1987)by Toni Morrison; and Sara Keating on the best new children’s fiction.

Two days after winning the Wainwright Prize for nature writing, Dara McAnulty has become the youngest author ever to be longlisted for the £50,000 Baillie Gifford Prize for Non-Fiction. Two former winners, Barbara Demick and Kate Summerscale, are also on the list.

Martha Kearney, chair of judges, said: “Narrowing more than two hundred books down to a long list has been a Herculean task, made even more challenging by the lockdown. Despite the joys of Zoom, we have managed to agree on thirteen exceptional books which reflect the creative power of 21st-century nonfiction from new writers to accomplished authors, spanning war, art, science, history, ghosts and The Beatles.”

The shortlist will be announced on October 15th and the winner on November 24th. Last year’s winner was Hallie Rubenhold for The Five: The Untold Lives of the Women Killed by Jack the Ripper.

One Two Three Four: The Beatles in Time by Craig Brown (4th Estate)

Labours of Love: The Crisis of Care by Madeleine Bunting (Granta)

The Idea of the Brain: A History by Matthew Cobb (Profile Books)

Eat the Buddha: The Story of Modern Tibet Through the People of One Town by Barbara Demick (Granta)

Our Bodies, Their Battlefield: What War Does to Women by Christina Lamb (William Collins)

Diary of a Young Naturalist by Dara McAnulty (Little Toller)

Those Who Forget: One Family’s Story; A Memoir, a History, a Warning by Géraldine Schwarz (Pushkin Press)

Stranger in the Shogun’s City: A Woman’s Life in Nineteenth-Century Japan by Amy Stanley (Chatto & Windus)

Good Luck With the Book is a new podcast celebrating literature that is being luanched on September 20th by Jamie O’Connell and Sarah Cassidy. A new episode will go live every other Sunday up to Christmas. You can check out the trailer here. Follow the podcast on Instagram @goodluckwiththebook and on Twitter and Facebook under the handle @goodluckpodcast.

Following a hugely successful inaugural festival in 2019, Dingle Lit is delighted to announce a wonderfully eclectic mix of authors and events for their 2020 Literary Festival, which will take place from November 19th-22nd. Dingle from a Distance will be a selection of live on-line events celebrating writers from Ireland and abroad, poetry, theatre and creative writing workshops.

The distinguished line-up features actor Gabriel Byrne and his forthcoming memoir Walking with Ghosts as well as New York Times bestseller Brit Bennett and her novel exploring race and identity The Vanishing Half.

Nigerian author Abi Daré will be interviewed on her harrowing yet triumphant novel, The Girl with the Louding Voice, while Sarah Moss will discuss her darkly comic novel, Summerwater.

Peter Geoghegan will discuss Democracy for Sale, Caelainn Hogan talks to the survivors of brutality of women in her book Republic of Shame, while Mark O’Connell will tell us how to survive the End, in discussing Notes from an Apocalypse.

A little sparkle and merriment will include cocktail making with the Peaky Blinders Cocktail Book and cookery with Michelin-starred chef JP McMahon and his book, The Irish Cookbook.

Dingle Lit 2020 will be a largely online festival, with the committee making the brave and bold decision to host live events on the Dingle Lit website. There will be a small number of hybrid events where a small audience can attend and will be streamed online.

“With the Dingle Literary Festival going ahead, albeit online, we can fulfill our aims of championing books and bringing authors and readers together. Going online also offers the opportunity of reaching a global audience and if book lovers cannot come to Dingle, we can bring a little bit of Dingle to them. We look forward to being a bright shining light of books and authors over a dark November weekend”.

To pre-register for events and for full festival line up, see dinglelit.ie

Award-winning author Marita Conlon-McKenna will provide a reading from her latest novel The Hungry Road, set during the Famine.

The community was rocked this year by the death of writer, cartographer and Roundstone resident Tim Robinson (The Connemara Trilogy, Stones of Aran) and his wife Máiréad. The festival will pay homage with a panel discussion featuring Dr Nessa Cronin NUIG, poet Moya Cannon, and Dr Fidelma Mullane exploring the couple’s extraordinary contribution to the region.

Mary McGillicuddy will present an accessible voyage into the wisdom and philosophies of the late John Moriarty. Druid theatre company will bring its outdoor production of Garry Hynes’s DruidGregory: A Galway 2020 Commission.

See the brochure for more details.