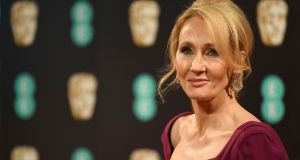 JK Rowling: “No award means so much to me that I would forfeit the right to follow my conscience.” Photograph: Justin Tallis/ AFP/Getty Images

JK Rowling is returning the Ripple of Hope award given to her last year by the Robert F Kennedy Human Rights (RFKHR) organisation after its president, Kennedy’s daughter, criticised her views on transgender issues.

The award, which is for people who have shown a “commitment to social change”, was presented to Rowling in December for her work with her children’s charity, Lumos. On receiving the award, Rowling called it “one of the highest honours I’ve ever been given” and said “Robert Kennedy embodied everything I most admire in a human being”. Previous winners include Barack Obama, archbishop Desmond Tutu and Joe Biden.

Earlier this month, Kerry Kennedy, a lawyer and president of RFKHR, issued a statement describing her “dismay” over “deeply troubling transphobic tweets and statements” made by the Harry Potter author.

In early June, the author wrote a series of comments on Twitter laying out her views on gender identity, including one that said: “If sex isn’t real, the lived reality of women globally is erased. I know and love trans people, but erasing the concept of sex removes the ability of many to meaningfully discuss their lives.”

These comments were condemned by LGBT charities, as well as several actors who have worked in the Harry Potter franchise.

Rowling then wrotea highly personal essay revealing her experience of domestic abuse and sexual assault, in which she argued that trans women who have not undergone hormone therapy or surgical transition should not have access to single-sex spaces.

In her statement Kennedy said that Rowling’s comments “had the effect of degrading trans people’s lived experiences”, and that her “attacks upon the transgender community are inconsistent with the fundamental beliefs and values of RFKHR and represent a repudiation of my father’s vision”.

“The science is clear and conclusive: sex is not binary,” wrote Kennedy, adding that she had spoken with the author to express her “profound disappointment that she has chosen to use her remarkable gifts to create a narrative that diminishes the identity of trans and nonbinary people, undermining the validity and integrity of the entire transgender community”.

On Thursday, Rowling announced on her website that she would be returning the award.

“Because of the very serious conflict of views between myself and RFKHR, I feel I have no option but to return the Ripple of Hope award bestowed upon me last year,” Rowling wrote. “I am deeply saddened that RFKHR has felt compelled to adopt this stance, but no award or honour, no matter my admiration for the person for whom it was named, means so much to me that I would forfeit the right to follow the dictates of my own conscience.”

Rowling said that Kennedy’s statement “incorrectly implied that I was transphobic, and that I am responsible for harm to trans people”.

The author said she had received “thousands of private emails of support ... from people affected by these issues, both within and without the trans community” and that she “absolutely refute[s] the accusation that I hate trans people or wish them ill, or that standing up for the rights of women is wrong, discriminatory, or incites harm or violence to the trans community”.

“RFKHR has stated that there is no conflict between the current radical trans rights movement and the rights of women,” said Rowling. “The thousands of women who’ve got in touch with me disagree, and, like me, believe this clash of rights can only be resolved if more nuance is permitted in the debate.” – Guardian