The Story of Mr Sommer review: sadness in soaring

Patrick Süskind, German author of the sinister bestseller ‘Perfume’, has written a delicately nostalgic novel that is a surprise as much as a revelation, writes Eileen Battersby 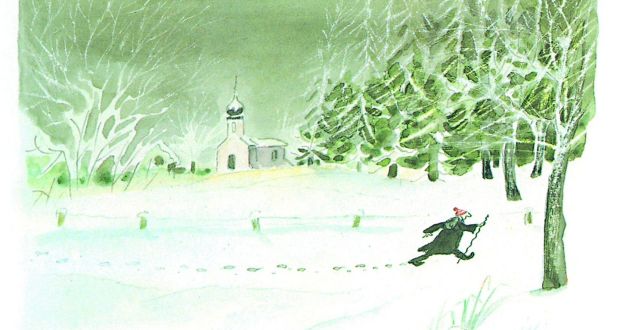 He was once a small boy convinced he could fly if only he’d put his mind to it. It almost happened one day on the way home from school. “There was such a strong wind blowing that even without spreading my arms I could lean into it at a sharp angle like a ski-jumper . . . I was almost flying, and if I’d just unbuttoned my coat then and held my coat tails in both hands and spread them like wings, why, then the wind would have picked me up . . . But I didn’t unbutton my coat.”

It really doesn’t matter. The narrator’s fantasy is so vividly recalled that he may as well have soared high in the air across the valley and over the lake near his home. Whatever about dreams of flying, he did climb many trees – and learned a great deal about falling. His worst descent left him with a bump on his head. It vanished after a few weeks, “but in later years I would still feel a strange tingling and throbbing in the same place, whenever the weather turned and especially when there was snow on the way”.

This beguiling, unsentimental account of childhood in rural Germany makes it clear that the likable narrator was a clever, imaginative, logical and lonely little boy. It is a book of revelations. Most surprising of all is that it was written by the gifted Patrick Süskind, who proved himself a master of the macabre with his elegantly horrific debut, Perfume: The Story of a Murderer. Perfume was published in Switzerland in 1985; an English translation and international success followed within a year. Written in the exquisitely dark tones of Oscar Wilde’s The Picture of Dorian Gray, Perfume describes the career of Jean-Baptiste Grenouille, an unwanted 18th-century slum baby born lacking a personal scent. He develops an obsession for virginal odours that becomes a deadly quest.

With its deranged anti-hero influenced by Charles Maturin’s Melmoth the Wanderer and Bram Stoker’s Dracula, Perfume is beautifully written, if revolting. It has sold more than 20 million copies.

A life in a day

Less disturbing but more moving is The Pigeon (1987; English translation 1988). Set in present-day Paris, it charts a day in the life of Jonathan Noel, a 53-year-old security guard manning an entrance to a bank. “He had once calculated that by the time of his retirement he would have spent seventy-five thousand hours standing on these three marble steps.”

Noel is an obsessive; home is a tiny room, which he has been buying over the years. His life is rigid and controlled. Yet this regime collapses on the morning he opens his door and sees a pigeon in the corridor. Its presence forces Noel into action, and he complains to the concierge. She agrees that someone must move the bird.

The Pigeon is a wonderful absurdist work. For all his oddness, Noel emerges as a sympathetic character at the mercy of his complex phobia. He is endearing in his narrow world view. As if he doesn’t have enough problems, he even rips his uniform on a park bench while retrieving litter, and fails to persuade a seamstress to help him.

The Story of Mr Sommer was first published in German in 1991 (as Die Geschichte von Herrn Sommer); it appears in English from Fox, Finch & Tepper, a new imprint of Mr B’s Emporium of Reading Delights, an independent bookshop in Bath, which aims to resurrect forgotten or overlooked classics.

This book’s boy narrator also has difficulties, such as living in the opposite direction from the other children. He is also taken with one of his classmates, the lovely Carolina, with whom he almost shares an adventure.

Then there are his piano lessons, endured under the ancient Ms Funkel, who lives with her even older mother. “I don’t know what words would do justice to Mrs Funkel: hoary, antique, prehistoric, old as the hills . . . I think she must have been at least a hundred. She was so old that really she was only alive in quite a narrow specialised sense, more like a piece of furniture, or a dusty preserved butterfly.”

The narrator’s account of how he manages to ride his mother’s bike to his music lesson, dismounting whenever he had to “overtake, be overtaken, or pass anyone coming the other way”, is brilliant.

Süskind’s measured prose and playful, gentle nostalgia are effortlessly conveyed by Michael Hofmann’s translation. This is vital, as, for all the humour, including Jean-Jacques Sempé’s drawings, there is a sadness at the heart of the tale. The narrator recalls Mr Sommer, a claustrophobic neighbour who spent his days endlessly walking.

Dominant in the narrator’s memory is a fierce, sudden storm that he and his father encounter while driving back from the races: “It was impossible to drive another yard . . . You could barely see five feet in front of you, and in those five feet there were simply millions and millions of icy billiard balls whirling through the air.” Out alone in the elements is the dogged Mr Sommer, who refused a lift, blurting out: “Why don’t you just leave me in peace!”

Although the music lesson appears, in hindsight, to be a humorous anecdote, at the time the narrator was so upset by Ms Funkel’s threats as to devise a drastic solution. “What was I doing in such a world in the first place? In such a mean, low-down world,” he laments. True to his tree-climber’s spirit, he selected “the biggest tree I knew, a mighty old red spruce . . . Falling was something I knew about.” From high in the tree he observes the arrival of Mr Sommer, who lay down among the tree roots and “emitted a long ghastly sigh – no, not a sigh . . . more like a groan, a hollow anguished sound from deep within his chest.”

Years pass, and the narrator becomes less aware of Sommer’s despair. “I don’t think anyone was especially aware of him, he had been seen so many times already that we tended to take him for granted.”

This simple, deliberate and very human book is a revelation – not only about Süskind’s art but also as a study of the simple loneliness of a happy child, juxtaposed against a sombre backdrop, and the relentless agonies of a soul in torment.