For the ‘Naked Lunch’ author, writing the Cut-Up Trilogy – available in marvellous restored versions – was a form of exorcism after he shot his wife dead 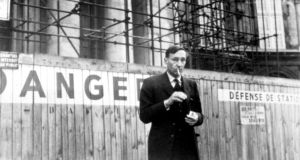 William Burroughs, the hipster American author and reclaimed heroin addict, was born in 1914 in St Louis, Missouri. A scion of the Burroughs Adding Machine Company, he was a patrician-looking character with an unsmiling, WC Fields-like humour who delighted in causing indignation.

His most famous novel, Naked Lunch (1959), contained passages of Swift-like scatology that, like an outdoor lavatory, take some getting used to. Burroughs’s bizarre and sometimes brutal imagination confronted such subjects as germ warfare and totalitarian forms of brainwashing.

In a career that spanned almost half a century he lived in a series of shabby hotels in Morocco, Mexico and London before settling in Lawrence, Kansas, where he died in 1997, at the age of 83.

Forty years earlier, in the late 1950s, Burroughs had begun to drift away from Jack Kerouac and the beat generation in order to experiment with the “cut up” method of writing as advocated by his avant-garde painter friend Brion Gysin. Burroughs’s dizzying 1960s trilogy of cut-up novels – The Soft Machine, The Ticket That Exploded, Nova Express – jettisoned conventional narrative for an impasto of arbitrarily juxtaposed cut-ups from newspapers, pulp sci-fi fanzines, travelogue and pages of hauntingly beautiful prose poetry.

With Gysin’s help Burroughs in fact invented a new cubist literature. Almost everything about the Cut-Up Trilogy, however, underwent substantial revision over the years. The Soft Machine, first published in 1961, appeared in three distinct versions. No book by Burroughs was ever really finished. (His debut, Junkie, was issued in 1953 under the name William Lee; Lee duly turned into Burroughs, and Junkie became Junky.)

Oliver Harris, the leading Burroughs scholar, has gone back to the original trilogy manuscripts and put together restored versions for Penguin Modern Classics. The three “new” books, complete with notes, appendices and introductions, are a triumph of judicious editorship and required reading for anyone interested in the 20th century novel. Without the Cut-Up Trilogy, it is safe to say, JG Ballard would not have written Crash or Anthony Burgess A Clockwork Orange. (Burroughs, says Ballard, was the true “lineal successor to James Joyce”.)

Parts of the trilogy were revised in London during the 1960s, at a time of countercultural ferment. At night Burroughs would walk the streets around genteel-seedy Earl’s Court and Bayswater with a tape recorder in hand, picking up stray voices and sounds for use in cut-up films and fiction. Anything was game. (“I wonder if you have taped your parrot?” he wrote to Paul Bowles, the writer.) In 1967, having sold the film rights to Naked Lunch, Burroughs moved into a “rather expensive” flat on Duke Street, Piccadilly, around the corner from the London Library, from where he made forays to Fortnum & Mason and the gay pick-up spots off Leicester Square.

Barry Miles, in his recent biography, William S Burroughs: A Life, argues that Burroughs became a writer chiefly as a consequence of his wife’s death. Always prone to bouts of melancholy and guilt at having to live off his parents’ money, he sought ways to channel off the “Ugly Spirit” he believed had caused the shooting.

Blaming an occult force for his wife’s culpable homicide might look like a craven default of responsibility. Nevertheless, writing the Cut-Up Trilogy was, for Burroughs, a form of exorcism and atonement.

Nova Express, with its pages of fear-ridden, seemingly paranoid prose (“Listen to my last words anywhere. Listen to my last words any world”) communicates a darkly humorous, mocking sense of 20th-century American life. Like The Soft Machine and The Ticket That Exploded, it is concerned chiefly with the struggle between controllers and those who want to throw off control.

In a pastiche of science fiction a gang of intergalactic criminals called the Nova Mob wage war against the Nova Police headed by Inspector J Lee (a cipher for Burroughs himself). The cut-up sections are not as numerous as one might think; much of the writing radiates a plain melancholy beauty. (“The shallow water came in with the tide and the Swedish River of Gothenberg”.) Pages of vaudeville comedy combine with a spare, Dashiell Hammett-style prose (“The name is Clem Snide – I am a Private Ass Hole”) to create a bracingly gritty, hard-boiled tone. The middle section of the trilogy, The Ticket That Exploded (1962), opens with an autobiographical reconstruction of Burroughs’s trip to South America after the second World War. (“It is a long trip. We are the only riders.”)

By any standards Burroughs had an eventful life. In 1936, having graduated in English from Harvard University, he studied medicine briefly in Vienna. In the Adriatic port of Dubrovnik he befriended a German-Jewish woman, Ilse Klapper, with whom he entered a marriage of convenience so she could gain a US visa. On his return to New York he worked alternately as an exterminator with a fumigating company and as a private detective. He and Klapper formally divorced in 1946.

In his dark, undertaker-like suits Burroughs mooched around the bars, automats and spaghetti joints frequented in postwar New York by the beat writers Kerouac and Allen Ginsberg and by morphine-injecting drifters like Vollmer.

The Cut-Up Trilogy was conceived some time later in Moroccan port of Tangiers, to where Burroughs decamped in the late 1950s. The smell of the city, of burning charcoal, excrement and marijuana, seems to have worked on Burroughs like an aphrodisiac. It was in Tangiers that he met Gysin, who told him writing was “50 years behind painting”, and duly encouraged Burroughs to cut up and reassemble his writing in order to catch up with collage and montage.

By the dawn of the 1970s Burroughs was increasingly dissatisfied with cut-up writing and with London. Industrial strikes brought repeated power cuts. (“England is a gloomy cold unlighted sinking ship that will disappear with a spectral cough”, he wrote to his beleaguered son Billy.) The royal wedding of 1973 compounded his dissatisfaction as devotees of Princess Anne and Mark Phillips were seen to camp out rough on the streets near his Duke Street flat. It was time to go back to the United States.

Burroughs’s final years in Kansas were spent surrounded by cats, raccoons, possums and a much-used arsenal of firearms. The author of the Cut-Up Trilogy continued to absorb quantities of alcohol and morphine, but his days as an avant-garde experimentalist were over.

Ian Thomson is the author of Primo Levi: A Biography