The rise of independent magazines: ‘It’s never been easier’ 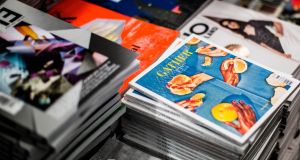 The likes of The Gentlewoman, The Gourmand, Cereal and Kinfolk all prove that with the right idea (and some savings) you can create something that lasts

It may seem strange that we are seeing a resurgence in independent magazines in an era where traditional print has never been more unstable. Yet independent publishing, far from dying, is undergoing a renaissance. These are not the A4-sized, glossy, free-DVD-inside commodities that dominate the newsstand. These are as much objects as magazines, collectible and shareable in the best sense of the word.

These are magazines that play with the form, from open binding to multiple paper stocks. Their subject matter is as diverse as their production techniques, from mental health to trans rights, from football to street wear. They are driven by a passion, both for their content, and the printed form, and thanks to technology, they are able to reach audiences around the world.

From Twitter to Instagram, from Patreon to Kickstarter, it’s never been easier to build an audience, and sell your creation to them.

That’s not to say printing your own magazine is easy – many of the independents never get past the first issue. That’s partly due to the way the magazine publishing industry is set up to favour the big publishers – those with multiple titles, large sales teams and economies of scale. These are the titles that rely on advertising (rather than copy sales) for revenue. They have a relatively cheap cover price (a 12-issue subscription to Vogue UK costs less than £20), and are filled with adverts.

The independent titles are reliant on copy sales, as their print runs are too small for advertisers and the media agencies that represent them. Go to an independent magazine shop like Magculture in London or Do You Read Me? in Berlin and you will be hard pressed to find an indie title for less than a tenner.

Cost is just one factor. For potential publishers, figuring out who your audience is is key. Make your subject too broad (a magazine about football) and you will get lost in the crowd. Make it too narrow (a magazine about redheads who support Bohemians) and your audience will be too small. Get it right (a magazine about League of Ireland fan culture) and you just might have a chance. And once you know who your audience is, many other elements will fall into place. To take the example of the League of Ireland magazine, you are going to sell it outside football matches, which means it can’t be too big, or too heavy. So, something closer to a zine than a large, perfect-bound magazine. And one you decide on a zine, that will inform your price: closer to €4 rather than €10. Once you know your price, you can figure out potential revenue from copy sales, and as a consequence, how much you can spend on printing.

These are just some of the things indie publishers need to think about. I interviewed more than 50 magazine makers for my book, The Magazine Blueprint, including legends such as George Lois (who designed those iconic Esquire covers in the 1960s) to new arrivals such as the Brooklyn-based gay men’s magazine, Hello Mr.

For the new publishers, the challenges are similar. One big issue is distribution. Shipping boxes of magazines is expensive, and with publishers taking all the risk (they pay for both shipping, and if the magazines don’t sell, the price of shipping them back), it’s key that publishers focus on getting as many direct sales online as possible. This goes back to building an audience - the more people aware you exist, the more people will purchase your magazine. That conversion rate will probably be less than 1 per cent, which shows how important it is to start building an audience before you publish.

For those that do make the plunge, the rewards are many. From the feeling of seeing your publication on sale in shops across the world, to leveraging the magazine into paying work, to the satisfaction of executing a complex creative project. As for the money, if it does come, it’s often indirect. If you do set up that League of Ireland fan culture magazine, you can host events, sell graphic prints, T-shirts and maybe set up a Patreon account where you can host football podcasts.

It’s easier than ever to build an audience, and while the magazine should be front and centre of what you do, it shouldn’t be the only thing. And while the prospect of building a committed audience willing to spend money on what you produce (what Wired founder Kevin Kelly called “a thousand true fans”) might be daunting, it’s not impossible. There are many independent titles that have crossed into the mainstream. The likes of The Gentlewoman, The Gourmand, Cereal and Kinfolk all prove that with the right idea (and some savings) you can create something that lasts. So, be bold, be original, and get to work – you never know what might happen.
themagazineblueprint.com