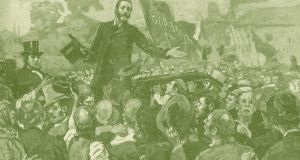 Multiauthored volumes covering broad chronological spans – almost five centuries in this instance – pose major challenges to editors and readers. Among these are issues of scholarship, structure and style. The new Princeton History of Modern Ireland rises impressively to these challenges. The scholarship is formidable: all the chapters are grounded in the most up-to-date research, all are substantial, the best sparkle with original insights. This is no more than one might have expected from the list of contributors. The essays may well represent, as the publisher claims, “cutting-edge scholarship by a new generation of historians of Ireland”, but the contributors are all well-published scholars, their contributions fall securely within their fields of expertise, and they have been allowed generous scope for extensive citation of sources and references.

The structure of the volume is not exceptional, but it merits close attention. As Richard Bourke explains in his introduction, the “approach is both thematic and chronological”. Six “overarching narrative chapters dealing with the main developments in society and politics throughout the period covered by the book” are followed by 15 chapters that focus “on topics and themes that played a peculiarly important role in the shaping of the trajectory” of modern Irish history.

These distinctions, however, do not quite accord with what is actually written. The six “narrative” chapters do indeed proceed chronologically from Jane Ohlmeyer’s judicious chapter on early modern Ireland (1540-1660) to Diarmaid Ferriter’s vigorous interim commentary on the 21st century so far. But they are all more richly textured than is generally understood by the description “narrative” history. Each is strongly interpretative, and each engages explicitly with historiographical issues.

They are substantial and challenging readings of successive phases of Irish history since the 16th century. Thus, for example, John Bew’s elegant commentary on Ireland under the Union (with its suggestive title A Failure of Consummation, Conciliation, and Consent) pivots on the proposition that “ultimately . . . the Union was born and died in the minds of the British political elite” and concludes that “although Irish nationalist mobilisation was more formidable than ever before under Charles Stewart Parnell, the real game-changer was the fraying of the pro-Union consensus in the British governing classes.”

Such forthright conclusions enliven the best of the chapters in this book; clear interpretative directions are discernible in all.

The logic of the editorial decisions on structure carries some risks. With the exception of Andy Bielenberg’s lucid chapter on the economy of independent Ireland, there is no chapter dedicated to outlining or explaining the development of the Irish economy from the 16th to the 20th century. It is true that each of the six core “narrative” chapters takes note of the economic context of political change (Ferriter more thoroughly, discussing recent woes). But more extensive consideration of key economic factors falls to several of the contributors to the thematic chapters. Such is the case, for example, with Ciara Boylan’s assured chapter on the Famine, and also in a succession of perceptive observations by Catríona Kennedy in her chapter, Women and Gender, or, again, in Enda Delaney’s concise chapter on migration and diaspora.

There is no question of a volume with such a cast of individualist scholars adhering to or advancing any particular orthodoxy or any single overarching framework for understanding the Irish historical experience. Take the case of colonialist readings of modern Irish history. Jane Ohlmeyer opens her chapter with the firm statement that “over the course of the 16th and 17th centuries Ireland was conquered and colonised”. But neither she nor later contributors adopt a schematic colonialist framework in interpreting modern Irish history.

Indeed, several contributors explicitly disavow the appropriateness of such an approach: Bew is adamant that, although “the Union may have been a failure when it came to amalgamation and conciliation . . . it is more fruitful to evaluate it on those terms than through the prism of 20th-century constructs of imperialism and colonialism”.

Yet several contributions (including Jill C Bender’s balanced treatment of Ireland and empire) acknowledge marked and enduring colonialist features of the Irish experience in the centuries after the conquest; deployed critically, the colonialist framework clearly has enabling value in making sense of British-Irish relations or the interplay of class, ethnicity or cultural identity in modern Irish history.

A teleological version of the “Irish story” – unbroken Irish resistance to incomplete conquest and sustained British oppression over many centuries, culminating in the independence struggle of 1916-1922 – has long been superceded by an evidence-based history of complexity and contingency, not only among “revisionist” historians but also, increasingly, among the wider public.

But there is a danger that, in the rush to emphasise contingency and disjunction in the Irish historical experience, stubborn continuities of attitude and mentalité may be ignored or underestimated. In this volume Vincent Morley provides a heroically concise survey of the Irish language in Irish society from its origins to the present day. It is regrettable that the political ideas and historical consciousness encoded and articulated in Irish – as explored by Morley himself in a number of recent studies – register so infrequently in other contributions to this book.

Ideas and ideology – and their embodiment in political movements and power structures – are the dominant focus of the volume as a whole. This is the case not only with the core narrative chapters but also with most of the thematic chapters. Essays on the principal thinkers of 18th-century Ireland, on nationalism, intellectual links between Young Ireland and Yeats, Irish modernism and its legacies, the history of Irish feminism, political violence in Ireland, religion, Ireland and empire, historiography: the emphasis throughout is on political ideas, sentiment and structures.

The primacy of ideology and ideas comes at a price: the virtual eclipse of popular culture and cultural practice (although Maurice Walsh’s essay on media and culture since the 1960s is suggestive of cultural forces meriting further exploration). Several recent growth areas in Irish social history are little in evidence here. For example, the social history of work and leisure (including sport and other areas of associational culture) has flourished in recent decades, but it scarcely features here. An exception to this general verdict is Ian McBride’s discursive chapter on religion, which, in addition to addressing complex issues of historical consciousness and cultural practice rooted in religious identity, provides a welcome comparative dimension in its commentary on the Irish experience.

This is not a book for the neophyte, the reader seeking an introduction to the history of modern Ireland. It addresses the informed, preferably disputatious, adult. Such a reader will find a great deal to savour in this fine collection.

Gearóid Ó Tuathaigh is emeritus professor of history at NUI Galway. He recently edited The GAA and Revolution in Ireland 1913-1923 (Collins Press)