‘The Poetry of Derek Walcott 1948-2013’ review: The Caribbean delivered with wit and colour 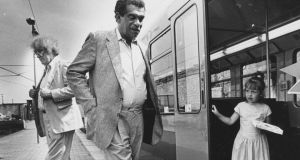 In 1988 in Dún Laoghaire, Derek Walcott took part in a round-table discussion with Joseph Brodsky, Seamus Heaney and Les Murray. By then identified with a cosmopolitan or “new internationalist” aesthetic, these poets consciously wrote from the peripheries, the “provinces” of empire, far, as Brodsky put it, from “decaying capitals”.

In his account of the poets’ discussions in Lives of the Poets, Michael Schmidt writes of Walcott that he “chose to identify himself with all the resources of his language. After all, [he said,] English wasn’t his ‘second language. It was my language. I never felt it belonged to anybody else, I never felt that I was really borrowing it.’ ”

Despite its unevenness, 600-plus pages of The Poetry of Derek Walcott 1948-2013 (Faber, £30) will remind readers of the justice of Walcott’s claim. The opening pages testify to his precociously stylish fluency and his early discovery of a subject he has yet to exhaust, the situation of a poet who writes from the margins of literary tradition: he was a teenager when he published ironic, self-aware lines that look forward to a long career where he will “have learnt to suffer / in accurate iambics” (I With Legs Crossed Along the Daylight Watch).

Walcott’s early explorations of a postcolonial poetics are much anthologised, although their sketchy outlines can seem a little rhetorical and period now, as when Ruins of a Great House (1956) describes its speaker: “Ablaze with rage, I thought / some slave is still rotting in this manorial lake, / And still the coal of my compassion fought: that Albion too, was once / A colony like ours.”

Published around the same time, A Far Cry from Africa is more knowing and much cooler, describing its speaker as “divided to the vein” but asking: “How can I face such slaughter and be cool? / How can I turn from Africa and live?”

This book stints on no part of Walcott’s career, which leaves room for longueurs: in the 1960s there are stretches of public verse where a poetic sensibility routinely records the wrongs of the time, resulting in poems most readers will agree with, without wanting to reread them. The turning point came when Walcott re-engaged with his St Lucia childhood in Another Life (1970), a long, autobiographical and Wordsworthian poem. Walcott would go on to develop a uniquely modern mastery of the sequence and of long poems that combine driving narratives with meditative lyrical passages.

The Star-Apple Kingdom (1979) begins with his great sequence The Schooner Flight, included in its entirety, whose narrative of an escapee sailor, Shabine, describes him in iconic terms:

I’m just a red nigger who love the sea,
I had a sound colonial education,
I have Dutch, nigger, and English in me,
and either I’m nobody, or I’m a nation.

Consideration of place and identity in the title poem, The Star-Apple Kingdom, is informed by the same spring and swagger, and the kind of breadth usually associated with good fiction, but it also develops the intricate, vivid images of the natural world that will strike anyone who reads this book.

That poem begins by describing a John Constable painting, which the poem first situates on a mantelpiece in a modern setting, “ancient pastoral / of dusk in a gilt-edged frame now catching the evening sun / in Jamaica, making both epochs one”, before submerging it in an account of the Caribbean as a “star-apple kingdom” whose “sea would gleam like nails / under a zinc sky where the barren frangipani / was hammered, a horizon without liners”, whose politics is always belated: “then the dogfights / began in the cabinets as to who had first sold / the archipelago for this chain store of islands.” Paradoxically, the depth of its engagement with the Caribbean was what brought Walcott readers beyond the region, and all around the world.

Jet-lagged touchdowns at various world cultural hot spots increasingly dot the later collections, but Walcott also continues to mine his richly descriptive and narrative mode in The Arkansas Testament (1987) and The Bounty (1997), published either side of his 1992 Nobel Prize: each takes the form of numbered sequences that refer as easily to Bob Marley and Richard Pryor as to Paul Gauguin and WB Yeats. The Light of the World is one of many poems that dramatise how the poet is troubled by his semi-detached relation to home places:

I was afraid I might suddenly start sobbing
on the public transport with the Marley going,
and a small boy peering over the shoulders
of the driver and me at the lights coming,
at the rush of the road in the country darkness,
with lamps in the houses on the small hills,
and thickets of stars.

The Poetry of Derek Walcott 1948-2013 ends with a bang: Walcott’s last collection, White Egrets (2010), shows the 80-year-old poet still ranging insistently across the Caribbean world he has delivered to his readers for six decades and finding within it the resources to address, with wit and colour, the historically determined landscapes he has lived in. The book’s “lost empires” are personal (“voices heard / in the page of a cloud, like the soft surf in my head”) and often searing (“a love that was pure punishment”), while A Sea-Change sceptically contextualises political “change”: