How do you write a novel? A draft in time saves nine

Declan Burke, the author of The Lammisters, is frequently asked about his process. Here he reveals all 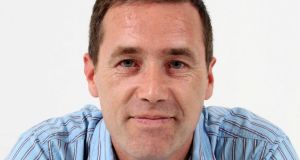 Declan Burke, author of The Lammisters.

I’m often asked about the best way to write a novel’s first draft, and thank God for that, for otherwise I’d have no social life at all.

For some reason it generally seems to happen when I discover myself at the bottom of Dawson Street around lunchtime, waiting to cross over to the Trinity side.

“I say, Mr Burke!” bawls some aspiring scribe who, having recently perambulated around from College Green, has mistaken me for that prime hunk of literary boulevardier, Edmund Burke. “How does one go about writing a novel-length story?”

“Well,” I bawl back, which usually precipitates something of a conversational longueur, it being my accoster’s expectation that I have deployed same as a precursor to embarking on lengthy disquisition, whereas my advice in the matter of writing novel-length stories is as brief as it is simple, ie, that if they must be written at all, then they really ought to be written well.

On being subsequently pressed for any further helpful detail, however small, I caution my interlocutors (a crowd tending to gather swiftly at such times) that their cause is entirely hopeless, for the wide-eyed optimism required to countenance the writing of a novel-length story is wholly at odds with what the market currently requires, it being your correspondent’s bitter experience that the modern novel, as the discerning Reader will undoubtedly agree, is rather more Keatsian than not, being a poor, weak, palsy-stricken, churchyard thing largely populated by useful idiots singing out Now can that jive! and What gives, matey? in peremptory tenor.

“Now can that jive!” sing out my cross-examiners, by which means – alas! – do they invariably reveal themselves as male, for only men labour under the delusion that jive, once uncanned, might be returned to source, whereas jive, as all women know, is the very sine qua non of genie escaped from bottle. “It is common knowledge, sir,” they chorus, “that any citizen might very easily write a bestselling and critically acclaimed novel, if only he had the time.”

“Very true,” I reply, for I am always acutely aware that my inquisitors have mistaken me for Edmund Burke, and that I have an obligation to said worthy’s reputation to behave decorously when waylaid in the public thoroughfare. “However, I would again sound the cautionary note, good sirs, this in relation to your stated ambition to write a novel that is both bestselling and award-winning, which consequences of publishing are by no means as inextricably linked as are love and marriage, or horse and carriage, or any other ostensibly axiomatic combination the immortal tunesmiths Cahn and Van Heusen would have us subscribe to.”

Our aspiring scribes here tending to stamp the foot and declare your humble narrator naught but a malapert knave and theatre-frequenting bawd, this – thankfully – whilst a tram goes clang-a-langing by, thus drowning out the more insightful of their character-skewering barbs, your humble correspondent now evokes the immortal Voltaire in reminding the foregathered mob that the perfect is the enemy of the good, and that if any aspiring author would only focus on writing a novel designed to be bestselling or critically acclaimed, then he will very likely discover that the one will inevitably lead to the other.

“Huzzah!” hoots the rabblement before tossing aloft their sweaty nightcaps. “And how long, exactly, should we expect to spend in writing our first drafts?”

Here your correspondent finds it advisable to caution against unreasonable expectations, reminding the increasingly riotous assembly that Rome wasn’t built in a day, and that most novels, despite being considerably smaller than any city they might care to mention, generally require at least a week to get just like mother used to make. “That said,” I continue in encouraging tenor, “the longer you labour in your dimly lit garret the more likely it is that your tale will absorb by osmosis that self-poisoning despair that tends to rocket a book up the charts. Thus it is my firm conviction that if you set yourself the simple task of writing 500 words per day, you will find yourself possessed of a novel-length story within nine months, with the added bonus of being able to appropriate the language of conception, gestation et al as you strain to deliver yourself of your singular creation.”

The mob now pausing to reflect and consider, and, subsequently agreeing that the feminine touch might be no bad thing should any future research confirm the received wisdom that fiction is read almost exclusively by women, they now generally enter conclave to elect a representative who is tasked with asking yours truly where he gets his ideas, to which query, and notwithstanding the fact that they believe they’re asking Edmund Burke where he gets his ideas, your correspondent invariably directs them to James K Bracken’s magisterial Reference Works in British and American Literature (Second Edition), for Mr Bracken’s tome contains innumerable examples of the works of novelists which were bestselling and critically acclaimed in their day but are now long forgotten and, crucially, out of copyright.

”Fill your boots,” I tell them. “Gorge upon their plot twists in the Borgiastic style. Snaffle every last peripeteia that isn’t actually nailed down, ignoring only the most egregious examples of deus ex machina proposed by those classical Greek dramatists who discovered themselves up against an unnegotiable deadline. Indeed, I believe it was the immortal Eliot who first proposed the thesis that plagiarism is by no means to be sniffed at, it being the case that talent borrows but genius – Ow! Who threw that?”

Alas, dear Reader, by this point the air is generally thick with sweaty nightcaps being employed as long-range materiel, whereupon your correspondent stands not upon the order of his going but takes to his heels as incontinently as did the infamous Dolon upon Ilium’s plain, and subsequently ducks into Tower Records and makes all haste for the jazz section down the back, in which sanctuary a persecuted author might pass a quiet few hours without fear of discovery.

Not for the faint of heart, this mentoring lark.
The Lammisters by Declan Burke is published by No Alibis Press