Fashionopolis: why cheap fast fashion costs so much 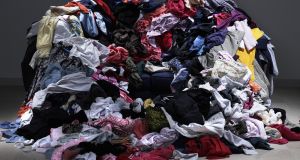 Worldwide, we throw away 2.1bn tonnes of clothing – much of it to landfill or shunted out to Africa.

Book Title:
Fashionopolis: The Price of Fast Fashion and The Future of Clothes

Everyone in fashion accepts that the industry is undergoing rapid and massive change with sustainability one of its biggest issues. Fashionopolis, Dana Thomas’s new book outlines the human and environmental cost of fast fashion and reports on the efforts of those trying to make it less damaging and wasteful.

The figures speak for themselves. The clothing industry churns out 80 billion garments annually – shoppers buy up to five times more clothing now than they did in 1980, averaging 68 items a year. Zara, the world’s largest fashion brand produced more than 450 million items in 2018, for example.

Worldwide, we throw away 2.1 billion tonnes of clothing – much of it to landfill or shunted out to Africa. In the world’s biggest slum in Nairobi, I have seen mountains of clothing from well-known brands stretching as far as the eye can see. It is a shocking vision of waste.

Thomas cites many such incontrovertible, uncomfortable facts outlining how online retailing and the technology revolution result in a concomitant rise in the exploitation of the environment, labour and intellectual property – away from the public gaze.

The Rana Plaza disaster in April 2013, the deadliest garment factory accident in modern history, however, drew international attention to the conditions endured by garment workers throughout Asia producing cheap clothes for western consumers. Thomas recounts a visit to Bangladesh last year and reports that despite huge improvements since the tragedy, sweatshops in dilapidated unsafe buildings and filthy working conditions still abound.

Many of the workers were sewing blue jeans when the building came crashing down on them and Thomas points out how the process of prewashing and distressing jeans is so polluting, how toxic the wastewater created and the thirstiness of cotton plants. Five billion pairs of blue jeans are produced every year and her research exposes the cost of cotton production with the associated use of noxious pesticides such as Roundup. A single T-shirt and a pair of jeans will swallow approximately 5,000 gallons of water. “If fashion production maintains its current pace, the demand for water will surpass the world’s supply by 40 per cent by 2030,” she says.

But how often does the average person think about how and where their jeans are produced? Some concerned designers are making real efforts to be more sustainable. At Paris fashion week in October, designer Claire Waight Keller who made denim a mainstay of her spring/summer 2020 collection for Givenchy reused material taken from deconstructed 1990s jeans.

She follows Stella McCartney, notable for her stance against fur and a standard bearer in her devotion to righting social and environmental wrongs. McCartney took PVC, a known carcinogen out of her collections in 2010, for instance and now only uses reclaimed cashmere because of the degrading of Mongolian grasslands where it is primarily produced. Thomas is, however, scathing about big companies’ going green to improve public relations or producing ecologically-minded products which are only a tiny percentage of overall revenues.

She profiles visionaries working in companies on more sustainable materials and those creating awareness of circular systems in which products are continually recycled, reborn and reused.

“We can’t keep thinking linearly: birth of a product, use of a product, death of a product”, she argues, a reality highlighted at the launch of the Make Fashion Circular initiative at the Copenhagen summit in 2017. Yarns such as Evrnu made of 100 per cent cotton waste and Econyl a regenerated nylon composed of old carpets, fishing nets and fabric scraps are now becoming mainstream, the latter used in everything from dancewear to swimsuits and linings.

Some argue that the best way to prolong the life of clothing is to launder less. McCartney recently maintained that tweed should never be cleaned, echoing Levi’s view that jeans should only be washed very infrequently. Small steps, according to Thomas, like lengthening the life of just one in five garments in Europe by 10 per cent could cut three million tonnes of CO2, save 150 million litres of water and divert 6.4 million tonnes of clothing from landfill.

A US writer based in Paris, Thomas has form when it comes to fashion being the author of two other well-researched and fascinating books, Deluxe, which outlined the growth of the luxury business and Gods and Kings, profiling the careers of John Galliano and Alexander McQueen, both victims of what she calls the “man eating” commercial pressures of the fashion system.

Her gift for scene-setting and her sharp assessments of many of the trendsetting entrepreneurs behind the scenes across the globe keeps Fashionopolis engaging throughout. Though fashion’s high visibility as an industry means that it tends to get the most attention, it is not the only polluter of the environment – other consumer items such as electronics have questions to answer about their production in low-cost countries and the waste material generated, but, as they say, sin scéal eile.