The Overstory review: A ranter’s sermon 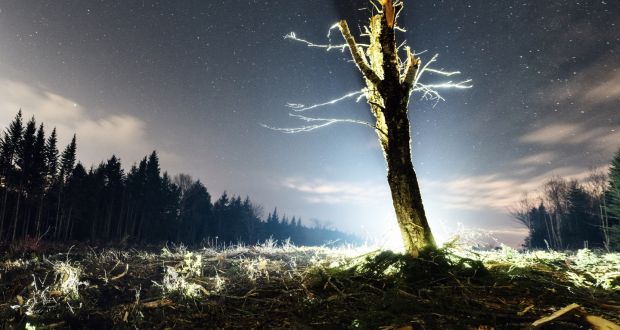 The Overstory might be a good book, and it might be a bad book. It might be a novel that reaches out for the unattainable and falls short of it, or a novel that overshoots its own good intentions. You can’t say it works as a piece of prose and you can’t say that it doesn’t work. You don’t know whether you should read it transfixed by the shadow of the fall of man, or throw it at the wall and run screaming into the forest.

Nine characters converge on a ecological protest and splinter away from it. There are scientists, actuaries, Vietnam vets and game designers. There are epiphanies and elemental brainstorms. There are sins of anthropomorphism and personification.

Chapter one begins: “Now is the time of chestnuts.” It isn’t the only sentence in the book that teeters on the brink. The Overstory is a ranter’s sermon. By the end of it you’ll know more about trees than you thought there was to know. Bushwhacked with the wondrous.

You will careen through this book. The prose is driven. You don’t really get to draw breath. For a book that approaches a quarter of a million words, respite might be required. But the writing is steel-edged, laser-sharp when Richard Powers wants it to be. When he sets out to nail meaning, it’s done. There are sentences you return to and wonder at. Trees “are like the tip of a Ouija planchette, taking dictation from beyond . . . they are in fact like nothing but themselves . . . Likeness is the sole problem of men.”

Powers dazzles and sandbags you with messianic end-of-time prose

The apex of the book is the protest against the felling of old-growth forest. Eco warriors take to the tree tops. They are called Maidenhair, Moss-eater, Grey Wolf. The bulldozers and chainsaws are coming but there is an idyll in the tree canopy to be got through first. There is a Free Bioregion of Cascadia. You wonder what happened to the side-of-mouth protagonists of American fiction – dead-eyed ironists squinting at the end of the world through cigarette smoke.

That’s not to say that Powers isn’t empirical when he wants to be. He dazzles and sandbags you with messianic end-of-time prose and then you’re ankle-deep in the corporate sleight of hand involved in the delivery of old-growth forests to logging interests, or looking at the legal structures required to grant actual rights to trees.

Borges is there along with ambrosia beetles. Kant. You’re in the middle of a storm of thought which has been wrestled into the shape of a novel by a writer’s act of will. A neuron blast of high-mindedness. You get to the brink of whimsy then you’re hauled back: “Reefs bleach and wetlands dry. Things are going lost that have not yet been found.”

There’s Powers himself on the back fly-leaf. A 21st-century animist with the eyes of a revivalist preacher. There are colours on his spectrum that no-one else can see. Or at least he believes they are there.

Margaret Atwood says that, “It’s not possible for Powers to write an uninteresting book”, a sly quote with just a little bit too much condescension buried in it. You want to take Powers’ side in all of this and then find yourself defeated by the high-minded and naive.

This high-octane earnestness is self-defeating

There’s a leaning towards the benign in the work, and this is given full rein when it comes to trees. Powers can take a marriage apart in prose, strip it mercilessly down to its bare parts, but a forest always gets the full kindly light. You want to tell him that it’s a tree, not a kitten in a basket, and it can look after its own meaning even if it can’t stop the teeth of a chainsaw and the greed of the timber mill.

Powers lines up with the angels and to a point earns his right to do so. Environmental degradation is a catastrophe. There is a right and duty to oppose it by any means possible. The law lines up with the powerful and the mercenary. You want the book to work but have your doubts. After a near death experience, a young student hears the planetary message. The most wondrous products of four billion years of life need help. But if the universe had a voice capable of speaking you’d expect it to be gravelly and sceptic.

His characters are in the main idealists, and in the main they are unexamined. They preach the sermon of trees to others and they preach it to themselves when they are alone. This high-octane earnestness is self-defeating. The authors lyricism thrown away in the pursuit of another assertion of the essential nature of trees, the tree lore, tree science, tree philosophy, tree wonder, and their elaborate vocabularies. You want it to work but have your doubts. Rapture is inward-looking. How Americans see the ground under their feet, the colonisers’ unfulfilled desire for absolute possession. An insistence on wrestling meaning from the land, shaping it to templates, expecting it to carry meanings, turning nature into self-regard.

The only response is to leave it to its own devices and humans can’t and won’t do that.