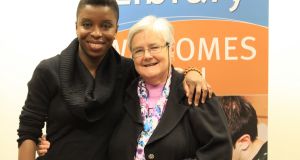 In early 2011 John O’Shea, a postgraduate student in the sociology department at Maynooth University, approached the library regarding a potential donation of material from Sister Majella McCarron (OLA).

O’Shea had interviewed her while carrying out thesis research on media coverage of the Shell to Sea campaign. I telephoned Sister Majella to discuss the extraordinary archive she had gathered from her time working as a missionary and social activist in Nigeria. She was keen that the unique correspondence she’d received from the Ogoni writer and activist Ken Saro-Wiwa would be preserved. The letters, written while Saro-Wiwa was on death row for highlighting the environmental destruction of his homeland by the international petrochemical industry, were smuggled out of military detention in bread baskets.

In November 2011, Sister Majella donated her collection of letters and poems from Saro-Wiwa to the library, and so, a new connection was born between Maynooth University Library and the Niger Delta, a connection that has given birth to the annual Ken Saro-Wiwa Poetry Prize; a prize which celebrates the poetry of eco activism.

This is a special year for the competition, as it is the 25th anniversary of the execution of Saro-Wiwa and his eight colleagues (the Ogoni 9). Winner of this year’s first prize is Lind Grant-Oyeye, who lives in Kilkenny and was born in the Niger Delta region of Nigeria.

Commenting on the entries, competition judge, poet and creative writing teacher Jessica Traynor said: “The poems the writers produced were moving, passionate, angry, and full of love for humanity and our planet. It was such a pleasure to see the entrants engage in such a meaningful way with themes of activism, the environment, migration and war – themes which we are all contemplating with more urgency now than ever. Reading them, it becomes difficult to doubt that we can make a change. But there is much to do and these poems spur us on.”

Grant-Oyeye said: “It’s great for me as an African writer who is an activist for social justice to win the award. It is an honour to be associated with Ken Saro-Wiwa. It is wonderful to see this connection between Europe and Africa being fostered through Maynooth University.”

Grant-Oyeye describes herself as passionate about highlighting social justice and mental health issues through the arts. When she is not writing, she is engaged in advocacy for mental health services for young people. She is the recipient of various poetry awards and has work published in literary magazines, anthologies and curated poetry projects around the world.

Commenting on the winning poem, Traynor said, “African Refugee, is a vibrant, lyrical piece touched by myth. It deals with the changes brought about to ritual by the arrival in a new country, but also with the stories we bring with us. An Ireland gifted with these new stories can only prosper.”

African Refugee
Broda,
do you feel the frost in this village square,
the way it makes our dance stop?
It’s not just because the electricity is gone,
or that the sun forgot it remains a star, we stopped.

O, broda,
are your fingers cold too, the way everything else is?
the moon gravitates towards, in its nightly romance feel,
after summer decided to die on us,
steady, slow, then suddenly, puff
the way damfoo buses on Lagos streets puff for breath.

Sista,
do you remember
that man who lost his kaftan while searching
for his father’s lost shirt
and his mother’s jewels bestowed
upon her by her ancestors?
How he searches.

O, broda,
The bulrushes on our path
now pretend to be carnations,
after they have been stripped
of spring colors
and the climate remains frosty
in its heat, as everything changes.

O, Sista,
who is my broda?
Glossary: Broda and Sista are African vernacular for brother and sister

The second prize poem in the adult category was Night Feedings by Eilish Fisher. Eilish, a graduate of Maynooth University, was born in Vermont and now lives in Wicklow. Her poem tackles the separation of parents from their children on the American border with Mexico. Traynor describes it as “a study in the transformative power of empathy.”

The winning poem in the school category was Bystander by Conor Walsh, a fifth-year student in Maynooth Community College. Described by Traynor as a deeply insightful poem, it interrogates the choices we make every day which impact negatively on others, and how systemic injustice makes these damaging choices easy.

Bystander
As he reached into his pocket,
He felt the cold metal key.
It sends a shiver up his spine,
But that will dissipate in an instant.

He turns around to take one last look at the site
Before it becomes a profit driven retail outlet.
He sees the family,
A father, mother and four children,
Attempting to hold back the emotions.

As they pack frantically
He ponders how they must feel,
The emotions that are consuming them.
They certainly won’t simply, dissipate.
A tear comes to his eye.

But he reminds himself,
This is not his fault.
He is only doing his job,
He’s an innocent bystander.

What more could he have done?

Second prize in the school category was Baking Banana Bread, written by Ceri Arnott, a final-year student in Wesley College. Traynor describes the poem as “an important record of the current moment, as seen through the eyes of youth. It weaves a subtle metaphor around learned actions and reactions that interrogates how we unknowingly copy the generations that preceded ours.”

These and other poems from the competition will be published by Daraja Press, alongside essays by a range of national and international contributors, in November, to mark the 25th anniversary of the execution of the Ogoni 9.
Helen Fallon is Deputy University Librarian, Maynooth University