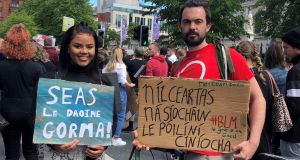 The importance of Irish to the identity of diverse communities on this island remains clear: reviewer Seaghan Mac an tSionnaigh and Eibhlís Mervyn, an Irish speaker from Belfast, at a Black Lives Matter protest in Belfast. The signs translate as “Stand with black people” and “No justice, no peace, no racist police”

Tomás Mac Síomóin has written a sequel to his widely read The Broken Harp, Identity and Language in Modern Ireland. The Gael Becomes Irish is the most recent reflection from the Dublin-born poet pathologist on the vagaries of the official national language of Ireland. Its title speaks to the 17th-century invention by historical historian Seathrún Céitinn of an “Irish” rather than a Gaelic identity.

Seathrún Céitinn’s Foras Feasa ar Éirinn (“Compendium of knowledge about Ireland”, c1634) emphasised Catholicism rather than Celtic speech as a means by which both the Gael and the Anglo-Norman could unite against a common Protestant foe. Effectively, in this post-Reformation period, the Gael became Irish. Writing contemporarily amidst political upheaval of arguably similar significance, Mac Síomóin returns the verb “became” to its present tense formulation. This clever innovation suggests that the process is one that is ongoing, but which might yet be reversed – an “unfinished odyssey”, if you will.

Céitinn’s earlier rhetoric was hardly the product of idle intellectualisation. His reconfiguraton of the parameters of Irish identity was articulated as a defensive reaction to expressions of colonial ambition of the kind contained in A View of the Present State of Ireland (1596). Its author, an English civil servant on Irish territory by the name of Edmund Spenser, had infamously recommended to his colonial government that Ireland be set on fire so as to cause famines which would exterminate the Gaelic people.

The opening pages of The Gael Becomes Irish recall the linguistic dimension of Spenser’s colonial project which required total anglicisation of the country on the grounds that “the speech beinge Irishe, the harte must needs be Irishe, for out of the aboundance of the harte the tongue speaketh”. This is a phrase which today might even be re-appropriated as yet another argument for increasing the use of the Irish language beyond the 2 per cent of the population who currently are said to speak it on a daily basis.

Spenser employed in A View of the Present State of Ireland a dialectical format purporting to report a dialogue between a pair of Englishmen concerned about the Irish situation. Just such a literary genre also exists in Gaelic literary culture where it is known as agallamh, as in “the argument of Oisín and Pádraig” which immortalised St Patrick’s discussion with one of the Fianna over the relative merits of paganism and Christianity.

Mac Síomóin too has opted for the agallamh model in The Gael Becomes Irish. Its content unfolds as a series of reactions to questions from an anonymous interlocutor whose occasionally accusative gripes resemble the Hibernophobic jibes sometimes levelled at the Irish-language Twittosphere. Mac Síomóin offers reasoned responses in each instance.

An inevitable consequence of having adopted an accessible conversational style is that Mac Síomóin must take frequent recourse to anecdotal evidence of the kind demonstrated in the following statement on Irish-medium teaching: “some secondary teachers have told me that most immigrant children experience no such Irish learning difficulty [which] lends credibility to the suspicion that their native fellow-students still live under the malign shadow of the bata scoir”.

Evidence for this latter assertion emerged during a very recent Raidió na Gaeltachta interview during which the son of immigrant parents and student of Pobalscoil Chorca Dhuibhne speaks in fluent Munster Irish of the racism he faced while competing in a Gaelic football contest. Sadly, it would seem that neither proficiency in the national language nor a commitment to Gaelic games can guarantee Irishness.

What, then, are the parameters of Irishness in a largely post-Catholic Ireland? Mac Síomóin’s workaround is to suggest that 21st-century Irishness is neither a linguistic nor a cultural marker of any real distinctiveness, but a geographical label. In light of the Irish wave of the #BLM movement, however, some from among the Afro-Irish have pushed the language question once more to the fore, with @PrinceNoir tweeting his intention to speak in Irish to the next person to ask where he’s “really” from.

Whatever rate of terminal decline might wrongly or rightly be ascribed to the Irish language, its continued importance to the identity of various minority communities inhabiting our geographical space, whether recent immigrants, Gaeltacht residents, or east Belfast Protestants, seems quite clear. But most Irish people, Mac Síomóin observes, have become desensitised to platitudes extolling the virtues of learning Irish. Are there disadvantages to not speaking our unique ancestral language? Mac Síomóin warns that anglophone unilingualism in a global world has contributed to a national character which in the past saw Ireland surrender its sovereignty during the 2011 bailout.

This perspective seems a little Eurosceptical, although some of my discomfort in this regard was appeased by due acknowledgement of the official status enjoyed by the Irish language within the EU. Mac Síomóin achieves further balance by also expressing a post-Brexit mistrust of “the wider Anglosphere and its proxies, led, inevitably, by the USA”.

Take note that is no narrow de Valeran protectionism. To demonstrate the viability of bypassing entirely the discourse of the Anglosphere, Mac Síomóin situates his reflections in the international context of, for example, the Portuguese postcolonial theory of Boaventura de Sousa Santos, or the Francophone work of Albert Memmi – a Jewish Arab intellectual who died within weeks of the appearance of The Gael Becomes Irish, as it happens.

Meanwhile, in the context of the author’s oft reiterated concern over dwindling readerships, the Irish psyche stands accused of already having been hopelessly infiltrated by “English-only gizmo screens”. My objection is that the Irish language retains a presence on social media out of all proportion with the overall number of fluent speakers. I would argue, however, that the increasingly vocal ambassadors of anti-5G or of Irexit ideology, for example, have fallen prey to the success of neocolonial disinformation campaigns which now are in full swing across the English-speaking world.

Contrarian adherents to such ideologies might try to harvest a bit of fake news fodder from The Gael Becomes Irish. Mac Síomóin has been writing poetry for decades, but he is a “scientist” by training, and his elucidation of the genetic determinism associated with post traumatic stress disorder is sure to satiate the conspiratorial sections of Irish society which in these Covid-19 times have evolved to become more and more “scientistic”.

Consider that the Great Famine is given in The Gael Becomes Irish as an example of a leading factor in the present day prevalence of PTSD in Irish people. The enduring folkloric narrative by which merely a million starved with another million having emigrated is debunked by Mac Síomóin’s citation of official UK government statistics according to which as many as 5 million Irish really died during the Great Famine.

Neither does Mac Síomóin shy away from the white hot debate around the legitimacy of classing the Great Hunger as a genocide. His controversial contribution to that particular conversation is to call attention to an 1846 description in The Cork Examiner of the Irish famine as a “holocaust”, an entire century before the usage more usually associated with that term. Unlike real far-right Ireland, however, Mac Síomóin does not mean to undermine the suffering of groups worse off than our own.

Mac Síomóin’s point, rather, is that various kinds of systematic violence aimed over many centuries to eradicate Irish speakers; this is a process which ever since has damaged attitudes to a Gaelic revival and is a process of which, he fears, we are in the final throes. His belief in linguistic revival extends to all other endangered languages as part of a language biodiversity which might punningly be said to “stem” from his own background in plant pathology. He concludes with some practical recommendations for teaching a form of Neo-Irish based on the expertise of such esteemed Irish language scholars as Nicholas Williams and Maoilsheachlainn Ó Ruairc. Loath as I may be to refer readers of The Irish Times to Amazon, it is from their website that a copy of The Gael Becomes Irish can be procured.

‘There is a time for everything. The time for hope is now’

John Boyne: Why I support trans rights but reject the word ‘cis’
5