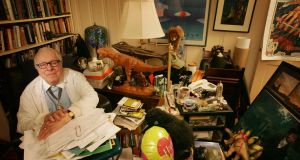 Ray Bradbury poses for a portrait at home in Los Angeles, California on September 22nd, 2008. Photograph: by Dan Tuffs/Getty Images

Science fiction fans will not need reminding that this year – August 22nd, to be exact – marks the centenary of Ray Bradbury’s birth. Nor will they, and many others, need to be told that Bradbury is one of the most celebrated exponents of the genre, a key figure in ushering in the golden age science fiction enjoyed during the cold war.

Story collections like The Golden Apples of the Sun (1953) and I Sing the Body Electric! (1969) and novels like The Martian Chronicles (1950), the perennially relevant Fahrenheit 451 (1953, inspired by the McCarthyite culture wars of the day), and Something Wicked This Way Comes (1962) helped see to it that this type of material was no longer confined to coteries or fanzines.

Through these and a raft of other stories, novels, plays, television scripts and movie treatments, Bradbury broadened science fiction’s horizons such that they touched on more venerable genres like wonder-tales and fantasy. And in doing so he attained the rare status of a writer whose mining of a downmarket vein made him both a bestseller as well as a cultural figure held in high public esteem.

One part of the Bradbury story that may be less well known, however, is his Irish connection. This had its origins when in 1953 director John Huston recruited him to write the screenplay for his film of Moby Dick. Though the two men had expressed a wish to work together, Huston’s offer came to Bradbury as a bit of a shock, possibly because at the time he had yet to read Melville’s novel.

But, of course, this was an offer he couldn’t refuse. So, the night of Huston’s proposal, Bradbury – by his own account – stayed up till dawn making good his omission, a feat that smacks of Ahab’s whale-tussling or some such epic fiction. And, by morning, the account continues, Bradbury had knocked enough skelps off the thing to believe he was the man for the screenwriting job. It turned out that he’d signed up for a stormy voyage – but the money was good: $12,500 for the script, plus another $200 a week living expenses.

At the time, Huston was living in Courtown House near Kilcock, Co Kildare and intended to direct Moby Dick with this as his base. Obviously Bradbury had to be on hand as well. So in September 1953, with his wife, their two small children and a nanny, he trekked from Hollywood by land and sea (Bradbury could imagine space travel but wouldn’t board a plane for God or man) to Dublin's Royal Hibernian Hotel 0n Dawson Street (where the arcade is now).

A rather monkish life he had of it there, it seems, rendering the novel’s blubber to reveal a frame fit for filming and every evening bringing the day’s work by taxi to Kilcock for Huston to, by turn, condescend to and eviscerate. To say that neither party was a happy camper would be to give understatement a bad name. In London, where the production relocated for studio work, they even briefly came to blows.

And, after the film was completed, Huston wanted to share the screenwriting credit. The Screen Writers Guild had already given sole credit to Bradbury but, in an unprecedented reversal, sided with the director. Huston kept mum about this in his autobiography, choosing to depict Bradbury as a machismo-free zone who, despite his writing’s stylistic and conceptual originality, “in casual intercourse . . . spoke entirely in clichés and platitudes”. Poor Ray!

The wonderful New Yorker reporter Lilian Ross wrote a most entertaining book called Picture on the making of an earlier Huston film adaptation, The Red Badge of Courage (1951). It’s a pity she didn’t wait for Moby Dick, in which just about everything that could go wrong did (filming ran way past schedule and, at $4.5 million, finished up about 50 per cent over budget).

But it wasn’t of money or time I was thinking about when I heard that a picture was to be made in Youghal, Co Cork. As a small boy in Lismore, Co Waterford less than 30km away, Youghal had no near rival as a pleasure-dome of a resort, with its splendid beach, a lighthouse at the side of the road, Perks’ amusements and, so I heard, dancing second to none at Redbarn.

Now the quay there, which I’d never noticed much before, was to be a stand-in for Puritan New Bedford, Massachusetts, from which Ahab and the Pequod set sail on their fatal quest. And Gregory Peck was going to be there. Such international attention created mighty buzz. Glamour, money, maybe even work – for a little while the air was filled with the promise that maybe we were going places.

When screenings broke down at the cinema in Lismore, as they often did, a hectic chant of “We want Moby Dick!” went up, accompanied by rhythmic foot-stamping, although we probably didn’t know if it was Huston’s movie we were calling for or the whale himself to entertain us – like some anti-Esther Williams demiurge – with his timber-shivering aquatics.

As my father was a confirmed cinéaste, one Sunday he and I bused to Youghal to see if we could latch onto anything resembling lights and action. I would have been satisfied with a glimpse of Noel Purcell or Joe Tomelty, both members of Huston’s cast (like the choice of location, another gesture of attention that betokened validation).

We waited and waited, much like people making movies have to, but not a blink of light nor a stir of action did we see. I was told later that Huston had a problem with Youghal – although the harbour had been dredged to admit the Pequod, the dredging hadn’t gone deep enough, so the fine three-master could only play its part at high tide. The film’s storm sequences were shot off Fishguard, mostly, while the plain sailing took place around Madeira and the Canaries.

I felt a bit cheated that our day out was confined to inspecting the squat buildings with false black and grey façades. But they provided some compensation by providing my first experience of trompe l’oeil – I had to touch those fronts’ painted windows to believe they weren’t real. Some forms of cheating could be okay. Those windows looked as convincing as ever when I eventually saw the movie, though the general New Bedford effect was rather diminished by the appearance on the quayside of bags marked Comhlucht Siúcra Éireann Teo.

Ray Bradbury didn’t visit Youghal, it appears, and it’s not all that clear if he saw much of Ireland beyond Kilcock. In a final blitz of creative energy he finished the script in April 1954, and once it met with Huston’s approval then Bradbury hightailed it out of town (the actual film did not have its premiere until two years later).

But it’s also true that no sooner did Bradbury leave Ireland than his imagination was drawn back to the place and he began to turn his time there to literary account. Beginning with The First Night of Lent, which appeared in the March 1956 issue of Playboy, he wrote some dozen stories set in streets around the Hibernian and in a pub in Kilcock with a landlord by the name of Heber Finn.

Collectively, these pieces form a vivid contrast to the isolation of daily forays into the heart of Melville’s whiteness (the script was nicknamed “the Beast”). Rather than themes of obsession and confinement, the stories pursue the exploratory and unknown that are science fiction’s stock-in-trade.

In the company of Heber Finn and his irregular regulars - as motley a crew as ever manned the Pequod – the sky’s the limit, and their experiences rely for their effects on the basics of fantasy – shape-changing, time-shifting, alien atmospheres. In the world beyond the workplace, all is potential and surprise, vividness and variety, a harmlessly diverting resort of green thoughts in green shades.

There are problems with this type of material, too, obviously, but its place as a counterpoint to the hard-headed, constrained business of movie-making is also pretty clear. Bradbury says as much in the title of the novel – Green Shadows, White Whale (1992) – which pulls the stories together within a payback-rich account of his dealings with Huston.

And with all due respect to the cultural, ideological and related questions to which green shadows give rise, it’s thanks to them that Ray Bradbury could say that, while in Ireland, he had a whale of a time.

George O’Brien is professor of English at Georgetown University, Washington DC. His memoirs include The Village of Longing: An Irish Boyhood in the Fifties (1987); Dancehall Days, or Love in Dublin (1988); and Out of Our Minds (1994).