Eleanor Oliphant is a most unusual and thought-provoking heroine

Gail Honeyman’s moving, inventive debut is about a young woman set apart from society because of trauma 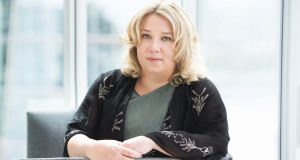 For aspiring writers out there, Gail Honeyman’s route to publication is the stuff of dreams. Motivated by turning 40, the Scottish author wrote her debut novel Eleanor Oliphant is Completely Fine in snatched moments outside her full-time job. While it was still a work in progress, she won the Scottish Book Trust’s Next Chapter Award. The novel has since sold in 27 territories to date and was shortlisted for the Lucy Cavendish Fiction Prize, the Bridport Prize and longlisted for BBC Radio 4’s Opening Lines.

For Eleanor Oliphant, Honeyman’s unfortunate and hugely sympathetic protagonist, living is the stuff of nightmares. The 30-year-old ekes out an existence that relies on rigid routine for survival. Working in the accounts department of a production company for the past nine years, Eleanor is the office oddball, a lonesome figure maligned by her colleagues for her quirks and inflexibility. Broken into three sections outlined in the contents (a spoiler of sorts), the novel charts Eleanor’s journey from her traumatised past to a future where she might “have a life, not just an existence”.

In a plot that pitches just the right amount of action with character development, two things kickstart Eleanor’s journey. The first is the arrival of a new colleague in work, kindly everyman Ray, who sees through Eleanor’s stony facade as they bond while helping a pensioner.

The second is Eleanor’s decision to get herself a man, someone who “Mummy” will approve of, which forces her out of her routine of work, solitary meal deal lunches, listening to The Archers in the evenings, and drinking two bottles of vodka every weekend alone in her house.

It is this mysterious fact that elevates Honeyman’s novel from the off, hooking readers as they long to discover what trauma occurred in Eleanor’s past that has prompted such a frequent need for oblivion.

The overindulgence is at odds with her character the rest of the time, a frugal, almost Victorian personality with a hilarious snootiness. Eleanor finds it “much, much easier” to do the cryptic crossword than read expressions on faces. She takes language literally and speaks in a comical antiquated register, signing her emails “Miss Oliphant” and prefacing attempts at small talk with “I essayed some chitchat”. An inaugural trip to a Bobbi Brown counter to get her make-up done leaves her delighted with the result: “‘I look like a small Madagascan primate, or perhaps a North American raccoon,’ I said. ‘It’s charming!’”

Just as Patty Yumi Cottrell and Paula Cocozza have done with debuts earlier this summer, Honeyman successfully uses her oddball narrator to poke fun at seemingly normal social conventions. She is particularly sharp on the beauty industry. Eleanor’s first bikini wax is depicted literally – “Kayla continued to dip and rip” – with a laugh-out-loud exchange following the end result of the Hollywood. Readers get the benefit of the full makeover effect beloved of romantic fiction heroines, served up with a dose of reality: “The goal, ultimately, was successful camouflage as a human woman … Did men ever look in the mirror, I wondered, and find themselves wanting in deeply fundamental ways?”

Her superiority is funny because it’s so at odds with her situation. Eleanor is a truthsayer who can’t see the sad truths about her own life

The observational humour contrasts brilliantly with the darker plot of trauma in a novel that hits the accessible literary sweet spot. As Eleanor endures weekly phone conversations with her incarcerated Mummy, readers are presented with a ghastly character who is cleverly incorporated by Honeyman to add suspense. Abuse, loss and death are part of Eleanor’s past but the clues are expertly dangled: “Mummy wouldn’t be able to advise. She doesn’t get to decide what she eats.” Echoes of Rachel Elliot’s acclaimed 2015 debut Whispers Through a Megaphone come through in the warped mother-daughter relationship and subject of trauma recovery.

Mummy’s caustic view of the world has been inherited by Eleanor, minus the evil undertones. Eleanor’s remarks are often condescending: “Duffle coat! Surely they were the preserve of children and small bears?” On wedding gift lists: “They choose things like plates, bowls and cutlery – I mean, what are they doing at the moment: shovelling food from packets into their mouths with their bare hands?” Her superiority is funny because it’s so at odds with her situation. Eleanor is a truthsayer who can’t see the sad truths about her own life.

Honeyman is excellent on the “bad days”. Depression is a “fearful, incurable thing, so horrifying that you dare not mention it; other people don’t want to hear the word spoken aloud for fear that they might too be afflicted”. Eleanor notices that “when you’re struggling hard to manage your own emotions, it becomes unbearable to have to witness other people’s, to have to try and manage theirs too”.

The human need for connection, initially scorned by Eleanor, is this heart-rending novel’s central theme. Eleanor Oliphant is most definitely not completely fine, but she is one of the most unusual and thought-provoking heroines of recent contemporary fiction.