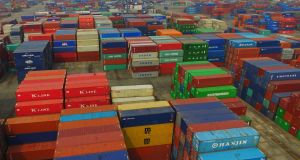 The inclusivity and sustainability of economic growth is a defining feature of modern political life. Photograph: Jie Zhao/Corbis via Getty Images

The global economy is six times bigger than it was 50 years ago. The consequences of this are profound. Average income has soared, tripling across the same period. Hundreds of millions of citizens have seen their living standards lifted out of the vulnerability of poverty.

This performance is even more remarkable when set against the long-term patterns of history. These global rates of growth are nearly four times larger than the average pace of economic development between the 18th and 20th century.

However prospects are changing. The consequences of the global economic crisis, the impact of technology in the workplace and shifting demographics are now raising profound questions about the nature of growth.

Economies can, and will, still grow. But volatility could become a “new normal” as the tone of global trade and politics changes. At a time of such change the function and inclusivity of growth is now intensely contested.

The latest contribution to this debate is The Infinite Desire for Growth by the French economist Daniel Cohen. The opening words locate growth as central to the organisation of society: “Economic growth is the religion of the modern world, the elixir that eases the pain of social conflicts, the promise of indefinite progress”. A catching elegance is a hallmark of this book.

This book succeeds in offering a succinct exploration of the history of economic growth. The opening chapters sketch out the two big bang’s that “altered the course of our existence”.

The first was the invention of agriculture which spurred a restructuring of societies. The transition from agriculture supported by rainfall to irrigation by river water changed the nature and location of communities. Leaders controlled the surpluses of farming. The specialization of activity and work began to develop.

This social evolution leads to economic change. This change, in turn, decisively alters the journeys of all, from the mightiest of nations to individual lives. The author contends that the Black Death was “the single circumstantial factor responsible for the transformation of the European economy”.

The number of agricultural workers declined radically, changing the balance of power between landowners and labourers. Wages increased. This, combined with transformational technologies such as the steam engine and new machines for spinning cotton, led to the Industrial Revolution.

The West prospered. The trade of empire and the development of the antecedents of the modern state helped Europe take the lead in global economic growth. Cohen writes that this led to the movement “from divine hope to the idea of progress”.

Material growth became synonymous with progress, for nations and individuals. This fusion, the author contends, has led to the economic challenge of our era as digital technologies change the nature of growth.

Machines are replacing human effort and surviving industries experience minimal change in their productivity. Cohen asks “how could we deal with a world without the kind of economic growth that we experienced in the previous century?”.

This is a vast question, and one that this book fails to answer. It glories in elegantly describing the problem. A survey of how French, American and Danish culture effect economic change is interesting.

But this book falters, and badly, when it attempts to describe how societies should respond to faltering growth. Arguing, for example, that “happiness encourages co-operation and creativity” and valuing work satisfaction hardly offers a map for changing the direction of our societies and economies.

Stating that “even in a society at a standstill in terms of global growth, there are ways to motivate wage earners other than through fear” will not alter the alchemy between the growth of an economy and living standards.

The most specific proposal is to green cities, as the author assures us that “the need for nature is still very much here, in the core of our civilized world”. The reader, enthralled by the pithy and stylish articulation of a challenge that cuts to the heart of our lives as citizens and consumers, will be disappointed by the paucity of answer in rising to this challenge.

This is disguised by the huge array of secondary sources marshalled by the author. No paragraph is complete without the citing of multiple works of scholarship.

The inclusivity and sustainability of economic growth is a defining feature of modern political life. The German sociologist Max Weber once described politics as the “strong and slow boring of hard boards”.

This is typified by the steady focus on education, competitiveness and public investment to create a virtuous loop between economic development and a good society.

That none of this is acknowledged in this analysis sorely diminishes the value of this book to this vital debate. Describing the challenge is, frankly, the easy bit.